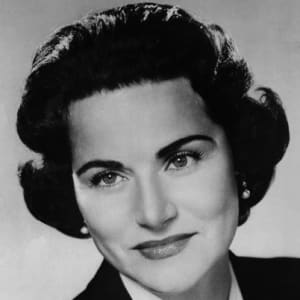 Pauline Phillips, best known by the pen name “Abigail Van Buren,” was one of America’s most adored advice columnists as the author of “Dear Abby.” She was the twin sister of columnist Ann Landers.

Born in Iowa in 1918, Pauline Phillips, better known by the pen name "Abigail Van Buren," debuted in the San Francisco Chronicle in 1956, writing the incredibly popular column "Dear Abby." The identical twin of advice columnist Ann Landers, Van Buren went on to become one of America's most adored newspaper columnists. She is credited with helping to transform the standard "lonely hearts" column into a more profound and candid feature, shaping the nation's changing moral conscience for nearly 50 years. Van Buren died on January 16, 2013, in Minneapolis, Minnesota.

Pauline Esther Friedman Phillips, better known by the pen name "Abigail Van Buren," was born in Sioux City, Iowa, on July 4, 1918. Nicknamed "Popo" at an early age, Van Buren grew up with identical twin sister Eppie Lederer, who would also go on to become a popular advice columnist, under the pseudonym "Ann Landers." The sisters were raised by Russian-Jewish immigrants: a father who made a good living as a successful movie theater proprieter and a homemaking mother. "My parents came with nothing. They all came with nothing," Van Buren later told The Associated Press. She went on to credit her parents with the social skills integral to her later writing career. "My contemporaries would come to me for advice—I got that from my mother: the ability to listen and to help other people with their problems. I also got Daddy's sense of humor."

Following their high school graduation, Van Buren and Landers attended college together at Morningside College in Sioux. Soon after, on July 2, 1938, the twins had a double wedding: Van Buren married a businessman named Morton Phillips, and her sister wed Jules Lederer, who would later found Budget Rent-a-Car.

In 1955, Landers began working as an advice columnist for The Chicago Sun-Times—authoring responses to readers for the successful "Ask Ann Landers"—and not long after, Van Buren followed suit. In her late 30s, Van Buren was offered a writing contract with the McNaught Syndicate. Her column, called "Dear Abby," debuted in the San Francisco Chronicle on January 9, 1956, and quickly proved to be a hit among readers. (She crafted her now-famous moniker by combining the names of two inspirational figures: the biblical hero Abigail and Martin Van Buren, the eighth president of the United States.)

At the same time that Van Buren's career was just taking off, her relationship with her sister couldn't have become more sour: "Dear Abby" had created direct and serious competition for Landers, and, even worse, she hadn't known about Van Buren's column-writing plans. Angry and hurt, Landers severed all ties with her twin. "I felt betrayed. Because she didn't tell me that she was considering it, she didn't tell me—she just presented it as a fact," Landers later explained. The sisters' bitter dispute soon evolved into a hostile and very public rivalry that would last for nearly a decade.

"They became serious competitors," Henry Ginsburg, Landers's high school boyfriend, later said of the dispute. "And it escalated to bounds that nobody expected. Nobody could believe what happened. And the scandal sheets loved it." On April 7, 1958, LIFE magazine published an article that aired the sisters' dirty laundry to the world. Featuring the sisters sniping at each other throughout, the piece concluded that theirs was, quote, "the most, feverish female feud since Elizabeth sent Mary Queen of Scots to the chopping block."

Inarguably, the estranged sisters helped to prove the old maxim that "there's no such thing as bad publicity." Their readership soared, heightening competition in the newspaper business: If a paper got Landers, its competitor had to get Van Buren.

By 1964, the sisters hadn't spoken in nearly seven years. But that summer, right before their simultaneous 25th wedding anniversaries, Landers decided to bury the hatchet. She called Van Buren and asked if the two couples could take a vacation together. Her sister responded positively, and the two agreed to resolve their issues and move on. "I thought, 'This can't go on forever'," Landers later explained of their reconciliation. "So, we met in Bermuda, and I remember she came with a fur-trimmed hat, and I said, 'Honey, we're not going to Knome, Alaska, we're going to Bermuda, get rid of the hat. We laughed, we had fun. And then the relationship, it was back to where it was before."

Covering topics ranging from relationship troubles to sex to religion, politics and other philosophies, Van Buren's column continued to garner success throughout the 1990s, with readers sending between 3,000 to 25,000 letters each week. According to TIME magazine, by the early '80s, Van Buren had hired 11 employees to help manage the large quantity of inquiries: six to answer letters, four to open mail and one to help conduct research. A further testament of its acclaim, "Dear Abby," under Van Buren's leadership, was published in 1,000 newspapers around the world.

Van Buren's approach to advice-giving differed from her sister's: While they both had an ear for the one-liner, "Dear Abby" tended to be more light-hearted and funny, and provided abbreviated responses to readers' questions; "Ask Ann Landers" tackled big issues head on, through more detailed responses. Among the various sentiments that she shared, Van Buren believed that parents should take lightly to issues caused by their children. "Kids grow up awfully fast these days," she once said. "You should try to have a good relationship with your kids, no matter what they do."

By the end of her career, which spanned more than four decades, Van Buren had become one of America's most adored newspaper columnists. She is credited today with helping to transform the standard "lonely hearts" column into a more profound and candid feature, shaping the nation's changing moral conscience for nearly 50 years.

From 1963 to '75, Van Buren conducted a radio adaptation of her famous column. She also wrote best-selling books, including The Best of Abby. When she retired from authoring "Dear Abby" in the '90s, her daughter, Jeanne Phillips, took over as full-time columnist.

Van Buren's twin sister, Ann Landers, died in June 2002. That same year, it was reported that Van Buren had been diagnosed with Alzheimer's disease.

Abigail Van Buren died on January 16, 2013, in Minneapolis, Minnesota. Calling her longtime career "fulfilling, exciting and incredibly rewarding," Van Buren said that being the heart and soul of "Dear Abby" gave her an enormous and unwavering sense of pride. "My readers have told me that they've learned from me. But it's the other way around. I've learned from them. Has it been a lot of work? Not really. It's only work if you'd rather be doing something else."