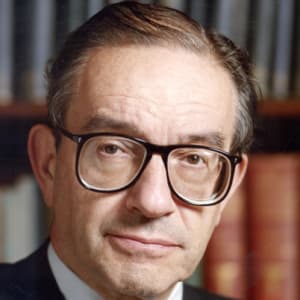 Alan Greenspan is a financial adviser best known for his service as chairman of the Federal Reserve Board of the United States from 1987 to 2006.

Alan Greenspan was born in New York City on March 6, 1926. After studying music at Juilliard, Greenspan embarked on a career in financial consulting. He advised several presidents before his 1987 appointment as chairman of the Federal Reserve Board by Ronald Reagan. Greenspan remained in this position until 2006, shaping United States monetary policies over a span of two decades.

Alan Greenspan was born March 6, 1926, in New York City, where his father worked as a stockbroker and financial analyst. He attended George Washington High School, where he played clarinet and saxophone alongside classmate and future famed musician Stan Getz. After graduating, Greenspan studied clarinet at Juilliard for a short time before transferring to New York University. It was at NYU that Greenspan began studying economics, earning undergraduate and graduate degrees in the subject. He completed his doctoral degree in 1977.

Greenspan worked on Wall Street throughout much of his time as a student at NYU. He held a position in the equity research department of the firm Brown Brothers Harriman before assuming leadership of Townsend-Greenspan & Co., a consulting firm, in 1955. He retained this position until his federal appointment in 1987. He also served on a number of corporate boards and coordinated the domestic-policy positions of Richard Nixon during his 1968 presidential campaign.

After Nixon's victory, Greenspan remained involved in politics, acting as the chairman of the president's Council of Economic Advisers under Gerald Ford. From 1981 to 1983, during the administration of Republican president Ronald Reagan, Greenspan chaired the bipartisan National Commission on Social Security Reform.

In 1987, President Ronald Reagan appointed Greenspan chairman of the Federal Reserve Board. He would remain in this position until 2006, wielding tremendous influence over United States monetary policy. He served under both Republican and Democratic presidents, providing trusted advice to presidents Ronald Reagan, George H.W. Bush, Bill Clinton and George W. Bush during his tenure at the Fed.

While widely respected for his economic knowledge and political savvy, Greenspan's critics have accused him of causing the dot-com collapse of 2000. He was subsequently criticized for contributing to the subprime mortgage crisis. When his fifth term expired in 2006, Greenspan retired from his position at the Federal Reserve Board. His successor in this role was Ben Bernanke.

Greenspan founded a private economic consulting firm, Greenspan Associates LLC, after leaving the Fed. He has advised investment banks, hedge funds and government agencies since that time, accurately forecasting the economic downturn of 2008. Greenspan's advice and influence proved to be valuable commodities despite his troubled and uncertain legacy in the public sector. Intellectuals including Noam Chomsky invoked this legacy regularly, and judged it harshly, during the 2011 Occupy protests.

Greenspan has been married twice. His first marriage, to artist Joan Mitchell, ended after less than a year. It was through his first wife that Greenspan met the novelist and philosopher Ayn Rand, who became a close friend. He married journalist Andrea Mitchell in a 1997 ceremony conducted by Supreme Court Justice Ruth Bader Ginsburg.

A memoir by Greenspan, entitled The Age of Turbulence, was published in 2007. In the book, Greenspan praised President Bill Clinton for his deep economic knowledge and criticized President George H.W. Bush and Vice President Dick Cheney for abandoning the principles of fiscal conservatism. He also revealed that he prefers to write in the bathtub, due to a back injury sustained in 1971.