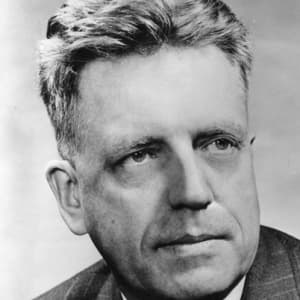 Biologist Alfred Kinsey wrote Sexual Behavior in the Human Male, which was based on research he and his colleagues conducted at the Institute for Sex Research.

Alfred Kinsey was born on June 23, 1894, in Hoboken, New Jersey. In 1938, he launched a sex studies program. In 1947, he incorporated under the name, the Institute for Sex Research, Inc. In 1948, Kinsey published his first book, Sexual Behavior in the Human Male, followed by a sequel in 1953. On August 25, 1956, Kinsey died in Bloomington, Indiana, from complications caused by congestive heart failure.

Alfred Charles Kinsey was born on June 23, 1894, to engineering professor Alfred Seguine Kinsey and his wife, Sarah (Charles) Kinsey, in the tenement town of Hoboken, New Jersey. He was the oldest of three children in a devout Methodist family. Alfred Kinsey's mother described her firstborn son as, "shy and soft spoken."

Shortly after earning his doctorate at Harvard, Kinsey accepted a job as a professor in the zoology department at Indiana University in Bloomington. A specialist in botany and insects, through his research, Kinsey established himself as the No. 1 authority on the gall wasp. From 1926 to 1929, he took field trips all over the country with his students, collecting tens of thousands of gall wasp specimens along the way. He focused intently on categorizing and numbering his specimens, but longed to take his scientific investigation a step further. Turning his focus to questions of evolution and natural selection, in 1930—a year after he was promoted to full professor—Kinsey published his findings in a paper called The Gall Wasp Genus Cynips: A Study in the Origin of the Species.

In the 1930s, Kinsey agreed to teach a marriage course. When his students starting asking him questions about sex, Kinsey realized there was very little scientific data on the matter. He decided to apply the principles of scientific research toward the topic of sexual behavior. In 1938, he launched a sex studies program. In the early 1940s, he procured funding from the National Research Council and the Rockefeller Foundation's Medical Division. In 1947, Kinsey and his research assistants became incorporated under the name the Institute for Sex Research, Inc.

In 1948, Kinsey published his first book, Sexual Behavior in the Human Male. He based the book on more than 10,000 interviews—during which men and women of all ages provided candid answers to personal questions about their sexual feelings and behaviors. The book quickly sold close to 500,000 copies. Kinsey used the royalties from the sales of his book to do more research. He came out with a sequel called Sexual Behavior in the Human Female in 1953, but it didn't sell as well as his first book.

During the last six months of Kinsey's life, his health steadily declined as he gradually developed congestive heart failure. On August 25, 1956, Kinsey died at Bloomington Hospital in Bloomington, Indiana. A few days earlier, he had bruised his leg after tripping in his garden, and the bruise had developed into a deadly embolism. Kinsey was 62 years old at the time of his passing. He was survived by his wife, Clara, and their three children.