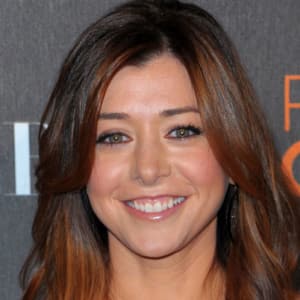 Alyson Hannigan got her start by starring on the television show Buffy the Vampire Slayer, followed by a recurring role in the American Pie movie trilogy. Since 2005, she has starred on TV’s How I Met Your Mother.

Alyson Hannigan was born on March 24, 1974, in Washington, D.C. In 1988, she made her film debut in My Stepmother is an Alien. Upon completing her studies in 1997, she landed her breakthrough role in the TV series Buffy the Vampire Slayer. Around the same time, she also achieved stardom on the big screen with the 1999 film American Pie. She also appeared in the film's two sequels.

Alyson Lee Hannigan was born on March 24, 1974, in Washington, D.C. Of mixed Irish and Jewish descent, Hannigan's father, Albert, was an overnight truck driver, and her mother, Emilie, was a real estate agent. Her parents divorced when she was only two years old, and Hannigan and her mother moved to Atlanta, Georgia. Hannigan got her start in show business at a very young age, appearing in her first film—an instructional video for new parents called Active Parenting—before her first birthday.

While still a toddler, Hannigan appeared in dozens of print advertisements and developed a love for posing before the camera. "Whenever they needed a baby, they would put me in front of the camera, and I loved it," she says. Hannigan then moved into commercial acting. At the age of four, she appeared in her first commercial for Duncan Hines, and she later appeared in national TV commercials for Oreos and McDonald's as well.

Hannigan attended the Northside School of the Performing Arts in Atlanta, where she played clarinet in the band and also featured for the soccer team. At the age of 11, she and her mother moved to Los Angeles so she could pursue her budding acting career more seriously. Three years later, in 1988, a 14-year-old Hannigan made her film debut in the sci-fi comedy My Stepmother is an Alien.

For the next two years, Hannigan had a small but recurring role on the ABC fantasy sitcom Free Spirit. Still, at this point in her career parts were hard to come by, and Hannigan worked at a video store and as a babysitter to supplement her acting work. For a time she babysat the real-life daughters of Bob Saget, the legendary comedian and TV dad who would become her future costar on How I Met Your Mother. Hannigan graduated from North Hollywood High School in 1992 and enrolled at California State University, Northridge to study psychology. While taking classes at Northridge, Hannigan also continued to act, appearing in TV series such as Almost Home (1993) and Touched by an Angel (1994).

Upon completing her studies in 1997, Alyson Hannigan retuned to acting full time and landed her breakthrough role on the long-running and enormously popular TV series Buffy the Vampire Slayer. The show follows Buffy Summers (played by Sarah Michelle Gellar), a teenage girl with superpowers that allow her to fight off vampires and other demons. Hannigan played Willow Rosenberg, Buffy's quirky and complicated best friend, who is revealed to be a lesbian in later seasons. The show's creator, Joss Whedon, did not initially want to cast Hannigan in the role.

Recalling Whedon's initial reluctance to cast her, Hannigan once said, "Until the day I die, I will give him a hard time." Nevertheless, Hannigan won Whedon over and quickly settled into the role of Willow, who became something of an idol and role model for gay teens. "I never had any apprehensions about it," she later said of portraying a lesbian character. "It's always been a part of my environment and my life. Growing up, my mom's best friend was—well, he still is—gay."

Buffy the Vampire Slayer ran from 1997 to 2003, making Hannigan a television star.

While working on Buffy the Vampire Slayer, Alyson Hannigan achieved stardom on the big screen with the 1999 film American Pie, a raunchy teen comedy that became a surprise smash hit. Hannigan played Michelle, a nerdy high school band student who delivers one of the most infamous and oft-quoted lines in recent film history: "This one time, at band camp…" She also appeared in the film's two sequels: American Pie 2 (2001) and American Wedding (2003). The American Pie trilogy transformed Hannigan into something of a sex symbol, and she has since appeared in provocative photo shoots in Playboy and other men's magazines.

Since 2005, Hannigan has starred on How I Met Your Mother, another long-running and popular TV comedy series. In 2012, she reunited with her American Pie castmates for the fourth installment of the film series, American Pie 4.

Alyson Hannigan is still very much in the prime of her career. However, there was once a time when many thought she had died. One day several years ago, news stations picked up an unfounded internet rumor and began reporting that Hannigan had died in a car accident. "I was out all day just doing my errands and stuff, and didn't know people were trying to contact me. I got home and there were tons and tons of messages on my machine," Hannigan recalled. "It was horrible for my friends. People were calling hospitals and morgues trying to find out if they had somebody of my description that had died in a car accident. It was bad." Needless to say, everyone was happy to find out that it had all been a hoax.

Alyson Hannigan married her longtime boyfriend and Buffy co-star, Alexis Denisof, in 2003. Describing his romantic proposal, she stated, "We were going up to my mom's house for Christmas. We had piled the dogs in the car. And we stopped to have a picnic. He said he was going to get his jacket out of the car and came back with a ring. My brain shut right off!" Hannigan gave birth to their first daughter, Satyana Denisof, in 2009.