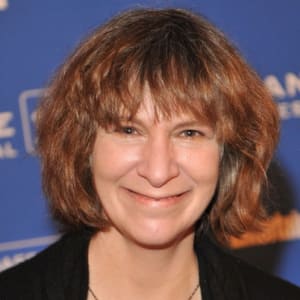 Amanda Plummer is an actress best known for her work on stage and in films such as The Fisher King, Pulp Fiction and The Hunger Games: Catching Fire.

Amanda Plummer, daughter of actors Christopher Plummer and Tammy Grimes, was born in New York City on March 23, 1957. She made her stage debut in 1979, followed by her first appearance on film in 1981. She has gained acclaim for her performances of fragile, eccentric characters, from the childlike nun in Agnes of God (a role for which she won a Tony Award), to the small-time criminal Honey Bunny in Pulp Fiction and the high-strung "tribute" Wiress in The Hunger Games: Catching Fire.

Amanda Michael Plummer was born in New York City on March 23, 1957. She is the daughter and only child of Canadian actor Christopher Plummer and American actress Tammy Grimes.

Plummer's parents divorced when she was just 4 years old. She sometimes went on the road with her mother, who was moving from one acting job to another; she was also partly raised by her maternal grandparents in Massachusetts. She attended high school at the United Nations International School in New York and had an early love of horseback riding. After attending Middlebury College in Vermont, she decided to embark upon an acting career.

Plummer studied acting at the Neighborhood Playhouse School of the Theatre in New York and then apprenticed at the Williamstown Theater Festival in Williamstown, Massachusetts. She made her first stage appearance in the quirky comedy-drama Artichoke at the Manhattan Theater Club in 1979. She acted alongside her mother, Tammy Grimes, in Turgenev’s A Month in the Country later that year and continued to add stage roles to her repertoire.

Meanwhile, Plummer attracted the notice of film director Lamont Johnson, who cast her with Burt Lancaster and Diane Lane in the offbeat Western Cattle Annie and Little Britches (1981). Plummer received positive reviews for her spirited performance in this film debut.

Plummer received a Tony nomination in 1981 for her portrayal of a troubled working-class teenager in a Broadway revival of A Taste of Honey. The following year, she was awarded a Tony for her performance in the drama Agnes of God, in which she appeared as a young, naive nun who is accused of murdering her own newborn infant.

Throughout the 1980s, Plummer played emotionally damaged women, individuals struggling to communicate and misfits of all kinds. On stage, she was the crippled Laura in Tennessee Williams's The Glass Menagerie (1983) and the Cockney flower girl Eliza Doolittle in Pygmalion, starring opposite Peter O’Toole (1987). On film, she was featured as the daughter of accused Russian spies in Sidney Lumet's Daniel in 1983 and a mute rape victim in The World According to Garp in 1982. She also appeared in many other dramatic and darkly humorous roles.

Plummer's career escalated with several notable roles in the 1990s and beyond. She played Robin Williams's love interest in The Fisher King in 1991; a small-time criminal nicknamed Honey Bunny who robs a restaurant in the introductory scene of Quentin Tarantino's Pulp Fiction (1994); and a bisexual serial killer in 1995’s Butterfly Kiss. She also made occasional television appearances on dramatic series such as L.A. Law and Law & Order: Special Victims Unit.

After a decade of fewer prominent appearances on screen and stage, Plummer has been introduced to a new audience by being cast in The Hunger Games: Catching Fire (to be released in 2013), the second installment of the popular film series based on the book trilogy by Suzanne Collins. In the role of the twitchy, high-strung Wiress, a former "tribute" making a return to the arena, Plummer once again brings an eccentric, surprising character to life.