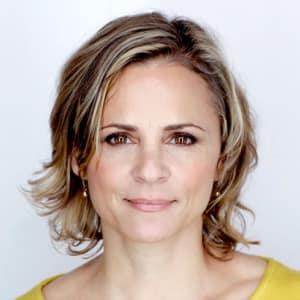 Comedian and writer Amy Sedaris is known for her outrageous stage and television characters. She is the younger sister of writer David Sedaris.

Comedian and writer Amy Sedaris was born on March 29, 1961, in Endicott, New York. Raised in Raleigh, North Carolina, she began her comedy career at Chicago's famed Second City, where she met fellow comics Stephen Colbert and Paul Dinello. Her career includes a number of film and television roles, most notably as Jerry Blank in the Comedy Central favorite, Strangers with Candy.

Born Amy Louise Sedaris on March 29, 1961, in Endicott, New York. One of six children, she is the daughter of Lou Sedaris, an IBM engineer, and his late wife, Sharon. Amy was the fourth child born into the family, and is the younger sister of the writer David Sedaris.

At a young age, Sedaris moved with her family to Raleigh, North Carolina. Sedaris credits much of her humor to her family and its inner workings. Her mother was a strong and sarcastic parent, who told great stories and was known for her sense of humor. She was beloved by her six children, and it was her attention the Sedaris kids all competed for. From that sibling rivalry, Sedaris discovered a fondness for the outrageous, wearing wigs and costumes. She also developed a knack for impersonating her parents and their friends.

Following her graduation from Jesse O. Sanderson High School, Sedaris, who'd started a small baking business with her mother, decided to leave North Carolina and join her older brother, David, in Chicago. There, Sedaris worked to hone her obvious natural talent for comedy at Second City, Chicago's famous improvisational troupe. The group is responsible for launching the careers of many young comedians, from Gilda Radner to Chris Farley. At Second City, Sedaris also met and begin working with two other comedians: Stephen Colbert and Paul Dinello.

In the early 1990s, Sedaris left Chicago for New York City. Around this time, Sedaris' career started to blossom. With Dinello and Colbert, the three collaborated on a short-lived Comedy Central program, Exit 57. As her brother David's career began to gather momentum, the two siblings formed a play-writing team called The Talent Family, which they used to push out several projects.

Early in her career, Sedaris discovered a love for playing characters that were damaged in some sort of fashion, either physically or mentally. Often lovable, and in some cases charming, the characters were hardly conventional. Nowhere was that more apparent than in the Comedy Central cult favorite, Strangers with Candy, a spoof on the classic network after-school specials that were popular in the 1970s. The program, which debuted in 1999, was a collaborative project for Sedaris, Colbert and Dinello. The show featured Sedaris as Jerry Blank, a former drug addict and retired prostitute who returned to high school after a 30-year absence.

In addition, her work over the years has ranged from regular television appearances on programs such as Just Shoot Me, Monk, and Sex and the City. She's also worked in a number of films, including School of Rock (2003), ElfChicken Little (2005) and Shrek the Third (2007). In 2006, Sedaris, Colbert and Dinello brought Strangers with Candy to the big screen.

Sedaris, who grew up cooking with her mother, ran a small baking business for a short time, which she operated out of her New York City apartment. Her specialties were cupcakes and cheeseballs. Inspired by her continued culinary interests, Sedaris authored several satirical lifestyle books: I Like You: Hospitality Under the Influence (2006) and Crafts for Poor People (2011).

Sedaris has never married, but did joke about her mythical boyfriend, Ricky. The two were a pair for years, joked Sedaris on The Late Show with David Letterman. In 2009, she told Letterman she'd moved on from Ricky and married another man named Glenn (also imaginary), who is a diseased merchant marine.