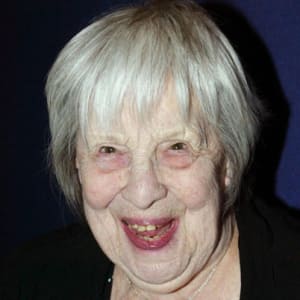 English actress Anna Wing is known for her long career on stage and screen, but most of all for her role on the long-running television series EastEnders.

Anna Wing was born in London, England, on October 30, 1914. She worked as an actress in repertory theater, in film, and eventually on television from the late 1930s through the 2000s, appearing in a range of comedies, dramas and literary adaptations. She is best known, however, for playing the role of Lou Beale on the popular British series EastEnders in the 1980s. Wing died in 2013 at the age of 98.

Anna Eva Lydia Catherine Wing was born on October 30, 1914, in London's Hackney neighborhood. Her family had resided in London's East End for several generations, and her parents ran a fruit-and-vegetable shop.

Wing was inspired to be an actress at the age of 11 when she saw legendary actor John Gielgud perform onstage in London. For practical reasons, she studied to be a teacher instead. For a time she also earned money as an artists' model. When she was in her early twenties, she was able to attend acting school in South London, thanks to an anonymous benefactor who assisted her by paying her tuition.

After completing her acting training Wing began to work in repertory theaters around England. When World War II began, acting jobs were scarce, and she enrolled in a nursing program and worked in London hospitals as a Red Cross nurse. She returned to acting after the war and continued performing onstage into the 1970s. Her most noteworthy theater credits included Early Morning in London in 1969 and A Man for All Seasons in Surrey in 1971. She also began to appear in movies ranging from the comedy Billy Liar (1963) to a literary adaptation of Ibsen's A Doll's House (1973) to the drama Providence, starring her idol, John Gielgud (1977).

'East Enders' and Beyond

Wing also appeared on numerous television programs, including the soap opera Market in Honey Lane in the late 1960s. However, she began the best-known phase of her career when she joined the original cast of the television series EastEnders. From 1985 to 1988 she played the strong-willed, outspoken Cockney matriarch Lou Beale, bringing her own memories of London's East End to her performance.

After leaving EastEnders, Wing made occasional appearances on other popular television programs, including The Last Detective, French and Saunders, and Casualty. Her films of the 1990s-2000s include The Calcium Kid and Tooth, the children's adventure tale Son of Rambow, and the short films Ex Memoria and Numbers Up.

She also continued to work on the stage, taking roles in projects as diverse as a revival of Noël Coward's Blithe Spirit and the contemporary drama Blue Heart.

In 2009, Wing was named a Member of the Most Excellent Order of the British Empire (MBE).

Wing was married to actor Peter Davey from 1944 to 1947; their son, Mark Wing-Davey, is an actor and director. Through a later relationship with writer Philip O'Connor she had a second son, Jon O'Connor, who entered a career in education.