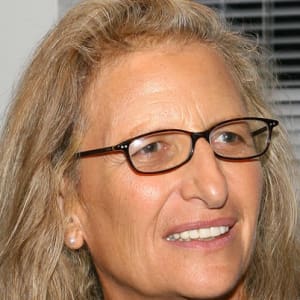 Annie Leibovitz, considered one of America’s best portrait photographers, developed her trademark use of bold colors and poses while at ‘Rolling Stone.’

Photographer Annie Leibovitz was born on October 2, 1949, in Waterbury, Connecticut. In 1970 she landed a job at Rolling Stone and went on to create a distinctive look for the publication as chief photographer. In 1983 she began working for the entertainment magazine Vanity Fair, continuing to produce images that would be deemed iconic and provocative. Having also worked on high-profile advertising campaigns, Leibovitz's images have been showcased in several books and major exhibitions around the world.

Anna-Lou Leibovitz was born on October 2, 1949, in Waterbury, Connecticut. She was one of six children born to Sam, an Air Force lieutenant, and Marilyn Leibovitz, a modern dance instructor. In 1967, Leibovitz enrolled at the San Francisco Art Institute, where (although initially studying painting) she developed a love for photography.

After living briefly on an Israeli kibbutz, the statuesque Leibovitz returned to the U.S. and applied for a job with the start-up rock music magazine Rolling Stone in 1970. Impressed with Leibovitz’s portfolio, which included an image of counter-culture icon Allen Ginsberg, editor Jann Wenner offered her a job as a staff photographer. Within two years, the 23-year-old Leibovitz was promoted to chief photographer, a title she would hold for the next decade. Her position with the magazine afforded her the opportunity to accompany the Rolling Stones band on their 1975 international tour, though she lost herself from the experience and ended up grappling with a crippling drug addiction.

While with Rolling Stone, Leibovitz developed her trademark technique, which involved the use of bold primary colors and surprising poses, as seen with a 1979 Bette Midler cover inspired by the rock music film The Rose. Leibovitz is credited with making many Rolling Stone covers collector's items, including an issue that featured a nude John Lennon curled around his fully clothed wife, Yoko Ono. Taken on December 8, 1980, Leibovitz’s Polaroid of the former Beatle was shot just hours before his death.

In 1983, Leibovitz left Rolling Stone and began working for Vanity Fair. With a wider array of subjects, Leibovitz’s photographs for the magazine ranged from presidents to literary icons to teen heartthrobs. Leibovitz's shoots also became known for over-the-top budgets that would later be at the center of major financial challenges.

To date, a number of Vanity Fair covers have featured Leibovitz’s stunning—and often controversial—portraits of celebrities. Demi Moore (very pregnant and very nude followed by a body painting shoot), Whoopi Goldberg (half-submerged in a bathtub of milk), Sylvester Stallone (appearing nude in a pose inspired by Rodin's "The Thinker") and Caitlyn Jenner (in a corset after having publicly revealed her identity as a woman) are among the most remembered celebs to grace the cover. Known for her ability to make her sitters become physically involved in her work, another of Leibovitz’s most famous portraits is of the late artist Keith Haring, who painted himself like a canvas for the photo.

During the 1980s, Leibovitz also started to work on a number of high-profile advertising campaigns. One of her most notable projects was for American Express, for which her portraits of celebrity cardholders like Elmore Leonard, Tom Selleck and Luciano Pavarotti earned her a 1987 Clio Award.

In 1991, Leibovitz’s collection of more than 200 photographs were exhibited at the National Portrait Gallery in Washington, D.C. She was the first woman to be so honored. Later that year, a book was published to accompany the show titled Photographs: Annie Leibovitz, 1970-1990. In 1996, Leibovitz worked as the official photographer of the Summer Olympics in Atlanta, Georgia. A compilation of her black-and-white portraits of American athletes, including Carl Lewis and Michael Johnson, were published in the book Olympic Portraits.

Widely considered one of America’s best portrait photographers, Annie Leibovitz published the book Women (1999), which was accompanied by an essay by her romantic partner, famed intellectual Susan Sontag. With its title subject matter, Leibovitz presented an array of female images from Supreme Court justices to Vegas showgirls to coal miners and farmers. The project is set to be continued in a travelling exhibition making a London debut in January 2016.

In 2003, Leibovitz published the book American Music, with an emphasis on important figures in the realm of blues, country, folk, hip-hop and jazz. Then in 2006, the Brooklyn Museum of Art presented the retrospective "Annie Leibovitz: A Photographer’s Life, 1990-2005," with a related book published as well. This was later followed by "Pilgrimage," a touring exhibition that debuted in Washington, D.C., in 2012 and focused on items associated with famous figures like Abraham Lincoln and Marian Anderson. As busy as ever, Leibovitz continues to be in demand as a photographer, working on projects that range from a 2014 Marcs & Spencer advertising campaign to the 2016 calendar for the tire manufacturer Pirelli. For the latter, Liebovitz chose to feature mostly clothed women from a variety of backgrounds and ages in contrast to the images of scantily clad models from previous calendars.

Leibovitz and Sontag were in a 15-year relationship that ended with Sontag's death in 2004, with Leibovitz's father passing away just weeks later. The two women traveled globally and found interconnections with their work, with Sontag encouraging Leibovitz to become more intimate with her photography.

Leibovitz is also the mother of three children. At the age of 51, she had her daughter, Sarah. In 2005, twin daughters Susan and Samuelle were born with the help of a surrogate mother.