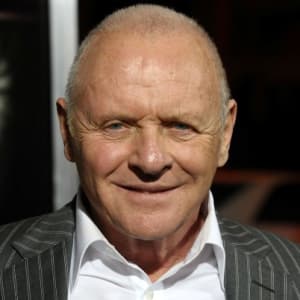 Anthony Hopkins is an Oscar-winning actor known for roles in many films, including The Lion in Winter, Silence of the Lambs and The Remains of the Day.

Who Is Anthony Hopkins?

Born on December 31, 1937, in Port Talbot, Wales, Anthony Hopkins pursued a stage career before working in film in the late '60s. Known for a variety of projects ranging from The Dawning to The Remains of the Day to Amistad, Hopkins has been nominated for several Oscars, winning for The Silence of the Lambs. His more fantastical work includes Titus, The Mask of Zorro and Thor, as well as HBO's Westworld.

In 2003 Hopkins married his third wife, antiques dealer Stella Arroyave, who hails from Colombia. He was previously married to Jennifer Lynton, from 1973 to 2002, and before that had been married to Petronella Barker, from 1967 to 1972. He and Barker had one daughter, Abigail Hopkins, who was born in 1968.

Hopkins' career began heating up in the 1970s and '80s. He won an Emmy for his role as Bruno Richard Hauptmann in The Lindbergh Kidnapping Case (1976). Throughout the 1980s, Hopkins continued to impress the critics with his work in film and TV, winning multiple Emmy Awards and a BAFTA Award.

'The Silence of the Lambs' as Hannibal Lecter

In 1989 Hopkins returned to the stage for a production of the musical drama M. Butterfly. But it was in 1991 that Hopkins, now well into his fifties, finally found himself shot to superstardom. His unforgettable, 17-minute performance as the infamous psychopath Hannibal Lecter in The Silence of the Lambs frightened and wowed fans and critics alike. At the time he took the role, Hopkins had been considering giving up on movies and retiring to London for a career on the stage. The fortuitous role resulted in not only an Oscar but a distinguished place in the popular consciousness as perhaps the number one on-screen villain of all time.

'The Remains of the Day'

Hopkins has since played the role again in the films' sequels. Following up his first real Hollywood blockbuster, Hopkins wisely chose to follow up with his film The Remains of the Day (1993), for which he was nominated for another Academy Award. He would be nominated again for Nixon (1995) and Amistad (1997).

In 1993 Hopkins was knighted by the British Empire. In April 2000, he became a naturalized citizen of the United States and, in 2006, he was awarded the Golden Globes' Cecil B. DeMille Award for lifetime achievement.

The acclaimed actor has continued to work in major motion pictures in recent years, appearing in such films as Proof (2005), Beowulf (2007) and Thor (2011). More recently, he was cast as famed horror movie director Alfred Hitchcock in the 2012 biopic Hitchcock. Hopkins earned raves for his starring role in the film, which includes Helen Mirren as Hitchcock's wife, Alma Reville. The movie explores the making of Hitchock's horror classic Psycho.

Continuing playing a range of roles on the big screen, Hopkins played the biblical character Methuselah in Noah (2014) and also appeared in Transformers: The Last Knight (2017) as Sir Edmund Burton.

On the small screen he's also found interesting characters to play, specifically on HBO's sci-fi thriller, Westworld, starring as AI mastermind Robert Ford. The first season, which premiered in 2016, became one of the most-watched dramas among the network's original programming and has won multiple Emmys.

Philip Anthony Hopkins was born on December 31, 1937, in Margam, Port Talbot, Wales. Hopkins is the son of Muriel Yeats — a distant relative of the Irish poet William Butler Yeats — and Richard Hopkins. His early years in Wales and schooling at Cowbridge Grammar School were relatively unremarkable, but when the soon-to-be actor met Richard Burton, the course of his life would dramatically change. Encouraged and inspired by Burton, Hopkins enrolled at the Royal Welsh College of Music and Drama when he was only 15 years old.

After graduation in 1957, Anthony Hopkins spent two years in the British Army before moving to London to begin training at the Royal Academy of Dramatic Art. After training and working for several years, he became a kind of protégé of the legendary actor Sir Laurence Olivier. In 1965 Olivier invited Hopkins to join the Royal National Theatre and become his understudy. The famed actor wrote in his memoir, "A new young actor in the company of exceptional promise named Anthony Hopkins was understudying me and walked away with the part of Edgar like a cat with a mouse between its teeth." When Olivier came down with appendicitis during a production called Dance of Death, the young Hopkins stepped in, making waves with his performance.

Billed as Olivier's heir to the British acting throne, Hopkins had the momentum to make the leap from stage to film, which was his primary ambition. He started on the small-screen in 1967 with a BBC production of A Flea in Her Ear. Soon after he was cast in The Lion in Winter (1968) as Richard I, sharing the screen with established stars Peter O'Toole and Katharine Hepburn.

Throughout the 1970s, Hopkins continued to work in film and on stage, garnering critical attention for this double duty. He starred in a Broadway production of Peter Shaffer's Equus (1974) even as he devoted more and more attention to developing his talents for television and film. His method of preparation for roles has always been a source of fascination to critics and young actors alike. Hopkins prefers to memorize his lines in extremis, sometimes repeating them more than 200 times.

The finished product typically reveals a naturalness that skillfully hides the massive amount of rehearsal the actor has done. Because of this style, Hopkins prefers fewer, more spontaneous takes, and has occasionally butted heads with directors who he perceives as deviating from the script too much or demanding too many takes. He has noted in the past that once he says a line and is done with a take, he forgets that line forever.

Despite a promising career, the actor long battled alcoholism, once saying, "I led a pretty self-destructive life for a few decades. It was only after I put my demons behind me that I was able to fully enjoy acting." In 1975 Hopkins began attending Alcoholics Anonymous and working to put those demons behind him.