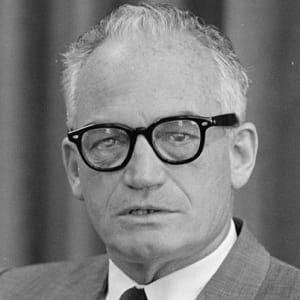 Barry Goldwater was an American politician best known as a senator from Arizona and the Republican candidate for president in 1964.

Born in Phoenix, Arizona, on January 2, 1909, Barry Goldwater ran his family’s department store before embarking on a political career. He served in the senate for 30 years, gaining recognition for his fiscal conservatism. Goldwater lost the 1964 campaign for the presidency to Lyndon B. Johnson in unprecedented landslide. He died in Paradise Valley, Arizona, on May 29, 1998.

Barry Morris Goldwater was born on January 2, 1909, in Phoenix, Arizona Territory, three years prior to Arizona statehood. His father, Baron Goldwater, had opened a department store called M. Goldwater & Sons in 1896. Barry worked at his father's store as a young man. He dropped out of college in 1928 to work fulltime after his father's death. Goldwater developed and sold popular items including "antsy pantsy," white shorts covered in printed red ants. He also took up aviation as a hobby during this period.

As the United States entered World War II, Goldwater made an unsuccessful attempt to obtain a combat flight assignment. Instead of flying in combat, he was responsible predominantly for freight shipments during the war.

Barry Goldwater found it difficult to return to his role at the department store after returning from war. He decided to explore the possibility of running for local political office. His first foray into the political sphere was participation in a Phoenix municipal reform movement. His friends and associates convinced him to run for city council thereafter.

Finding that he enjoyed campaigns, Goldwater began to consider a more ambitious candidacy. In 1952, he ran as a Republican for a seat in the United States Senate, and won.

Goldwater represented Arizona in the senate for 30 years. His brand of conservatism stressed small government and the absolute rejection of collectivism. Goldwater was particularly suspicious of labor unions as a base of political power and decried foreign aid and unbalanced budgets. His outspoken nature made him an instant star of the Republican Party. His 1960 book, The Conscience of a Conservative, sold millions of copies across the country and firmly established his reputation.

In 1964, Goldwater captured the Republican nomination for president. California governor and future president Ronald Reagan was a key ally in securing the win.

Goldwater lost to Democratic opponent Lyndon B. Johnson in a landslide. Johnson effectively branded Goldwater as a radical and a demagogue whose election would jeopardize the stability a country already ensconced in the Vietnam War. The campaign against Goldwater produced the "Daisy ad," one of the most famous political advertisements in American history, which presented nuclear war as a clear consequence of voting Republican in 1964.

After losing the election, Goldwater ran for the senate again and won, serving from 1969 until his retirement in 1987.

As the Christian Right ascended in American politics, Goldwater harshly criticized the trajectory of the Republican Party. He continued to make public appearances until the late 1990s, demanding a return to fiscal rather than social conservatism as the basis of a national platform.

Barry Goldwater died at his home in Paradise Valley, Arizona, on May 19, 1998.