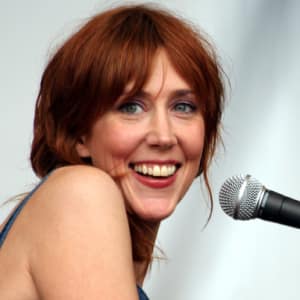 Beth Orton is an award-winning singer-songwriter and guitarist who plays folk and acoustic pop on albums like Comfort of Strangers and Sugaring Season.

Born on December 14, 1970 in East Dereham, England, Beth Orton went on to collaborate with electronic music producer William Orbit before releasing her debut LP, Trailer Park, in 1996. Hailed for her "folktronic" sounds, Orton won a Brit Award and released several albums over the next decade, including Daybreaker. She started a family before releasing her fifth studio album, Sugaring Season.

A Life That Led to Music

Elizabeth Caroline Orton was born on December 14, 1970 in East Dereham, part of Norfolk County, England. Orton developed a love of nature and enjoyed the rural beauty of her upbringing, though she moved to London at the age of 14, after her parents had split. Orton was also an avid book lover who enjoyed writing and for a time pursued theatrical work as an actress, not really thinking that she would be a good match for a music career.

Both of Orton’s parents had died by the time she’d reached 19. She went off to Thailand to live in a Buddhist community for a time. There she explored concepts of solitude and self-reliance that would inform her later work.

Back in Europe, Orton met ambient music producer William Orbit at a London bar. The two dated and Orbit took note of Orton’s distinctive voice. The two collaborated as the duo The Spill and on Orbit’s Strange Cargo III album, with Orton co-writing and providing vocals for “Water From a Vine Leaf.” (Orbit would later become well known for his work with Madonna on her Ray of Light release in 1998.) Orton also worked with the acid jazz group Red Snapper and electronic-dance icons The Chemical Brothers.

Orton’s first full-length album, Trailer Park, was released in 1996, featuring her vocals and self-taught guitar work; it immediately grabbed the attention of the British music community, earning Brit Award and Mercury Prize nominations. Orton’s second album, 1999’s Central Reservation, featured production from Ben Watt of the duo Everything But the Girl. Orton won a Brit Award in 2000 for the release while also receiving another Mercury Prize nomination.

Audiences and critics alike took notice of the singer/songwriter. Some coined the phrase "folktronica" when describing Orton’s sound, as it moodily combined traditional acoustic music with more contemporary synthesized styles. Her third album, the richly layered, sometimes romantic Daybreaker (2002), started off with the scenic “Paris Train,” another song that exemplified Orton’s style of the time, mixing electronic flourishes with lush classical orchestration. She also continued to present deeply felt lyrics on relationships and self-awareness. Orton then released The Other Side of Daybreak in 2003, which contained remixes, remakes and previously unreleased tracks.

Orton’s next album, 2006’s Comfort of Strangers, took two weeks to record and alternated between up-tempo tunes and slower, tender moments. The album was also more traditional in its sound, not relying on synth embellishments that some saw as Orton’s trademark.