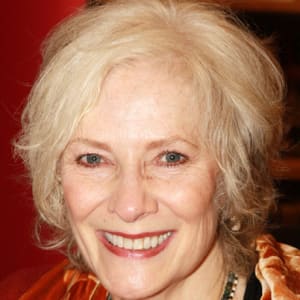 Betty Buckley is an American stage and screen actress best known for roles in the television show, Eight is Enough, and later film and theater roles.

Known as the "Voice of Broadway," Betty Buckley has enjoyed a thriving career on stage, film and television. She began her acting career at 15, in Fort Worth, Texas, with a production of Gypsy. Buckley is probably best known for such roles as Abby Bradford on the television show Eight Is Enough and as Grizabella in the musical Cats. More recently, she has appeared on television in Oz and Pretty Little Liars and on stage in The Old Friends.

Actress Betty Lynn Buckley was born in Big Spring, Texas (some sources say Fort Worth), on July 3, 1947. Buckley started honing her performance skills very early on, singing in her church at the age of 2 and taking dance lessons a year later. Her mother took her to see a production of The Pajama Game when she was 11. She was so inspired by the experience that she decided to do her own take on "Steam Heat" for a junior high talent show.

As Buckley explained to Desert News, this talent show performance at Fort Worth's Monnig Junior High School changed her life. "I finished singing and for a moment there was this stunned silence. Then the whole place went crazy. That was it. That was the beginning."

Buckley made her professional stage debut came at the age of 15 in a production of Stephen Sondheim's Gypsy. She gained additional experience by performing regularly at musical revues and various summer stock and children's theatrical productions. Buckley was crowned Miss Fort Worth in 1966 while attending Texas Christian University as a journalism major and head cheerleader. When she performed at the Miss America Pageant the following year, she was spotted by a talent agent to audition in New York where she went on to sign with the International Famous Agency.

After graduating from college, Buckley eventually made it back to New York. There she landed the part of Martha Jefferson in the Broadway musical 1776. After this role, Buckley went to London to appear the musical comedy Promises, Promises. She got a chance to work with her childhood idol Bob Fosse after winning a part in the musical Pippin. In 1976, Buckley made her feature film debut in the horror classic Carrie based on the book by Stephen King and directed by Brian de Palma.

Turning to family friendly fare, Buckley co-starred with Dick Van Patten in the hit TV series Eight Is Enough. She played Abby Bradford, a stepmother to eight kids, on the show. The show ran from 1977 to 1981. After her small screen success, Buckley soon returned to the stage. She starred as Grizabella in Andrew Lloyd Webber's musical Cats. In 1983, Buckley won the Tony Award for her work on the show.

Buckley worked steadily through the rest of 1980s. On the big screen, she appeared in the musical drama Tender Mercies (1983) with Robert Duvall, Woody Allen's Another Woman (1988) and Roman Polanski's Frantic (1988) with Harrison Ford. Buckley also made numerous TV appearances on such shows as Cagney and Lacey and LA Law. On the Broadway stage, she worked on such musicals as The Mystery of Edwin Drood and the short-lived adaptation of Stephen King's Carrie. She later received raves for her turn as Norma Desmond in Sunset Boulevard in the 1990s.

These days, Buckley continues to work as an actress and a singer. She has appeared on such TV shows as Pretty Little Liars, Law & Order: Special Victims Unit and Oz. In 2014, Buckley was nominated for a Drama Desk award for her leading role in The Old Friends by Horton Foote. She also gives several concerts a year and released the album Ghostlight in 2014.

This talented performer also shares her gifts with others by holding workshops for aspiring performers. Over the years, Buckley has received numerous honors for her contributions to the arts. She was given the Texas Medal of the Arts Awards in 2009 and was inducted into the Theater Hall of Fame in 2012.