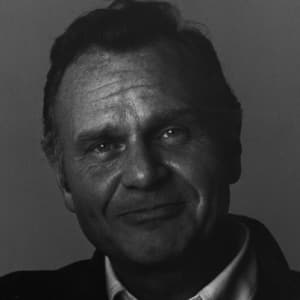 Designer Bill Blass was known for building a fashion company via his approach to luxurious women’s wear that focused on ease and comfort.

Bill Blass, born in Fort Wayne, Indiana, in 1922, went to work for the clothing manufacturer Anna Miller after serving in World War II. Once Blass became owner of his own company, which specialized in women's and men's wear, he began licensing his name to products outside of fashion, a trend that would make his company highly profitable. With hands in both the couture and ready-to-wear worlds, Blass had a charming, warm persona and was called upon to dress a wide array of public figures. He died in 2002.

William Ralph Blass was born on June 22, 1922, in Fort Wayne, Indiana, the second child of Ralph Blass and Ethyl Kaiser. The future designer faced major trauma at 5 years old when his father killed himself in the family parlor. Blass would later find out that his grandfather had committed suicide as well.

Coming of age during the Depression, Blass was captivated by the glamour of movies and fashion magazines and developed an ardent desire to move to New York City. While In his teens he sketched evening dresses, which he was then able to sell to an outside company. Blass left Fort Wayne at 17, moving to a YMCA in New York and later taking on a job as a sketch artist for a sportswear business. Blass continued to work on his fashion illustrations when he was stationed in Europe during World War II and served in the 603rd Camouflage Battalion, creating decoys intended to foil enemy attacks.

After the war, Blass returned to New York and worked briefly for Anne Klein, who reputedly thought Blass had no talent. He later went to work for the manufacturer Anna Miller, whose brother Maurice Rentner was a designer with his own house. Upon the two companies merging and Rentner’s passing in 1960, Blass would come to forge his own label—“Bill Blass for Maurice Rentner”—and an iconic fashion entity was born.

In 1970 Blass bought out Rentner to create Bill Blass Ltd. The designer came to be known for a women’s line that glamorized American sportswear aesthetics and in 1967 had also launched a men's wear line that merged edgy designs with classic styles. Over the years, his women’s wear creations were worn by a squadron of celebrities, including Nancy Kissinger, opera singer Jessye Norman, heiress Gloria Vanderbilt, first lady Barbara Bush and journalist Barbara Walters.

Traveling the country regularly to promote his brand, Blass also created licensing deals that placed his moniker on a range of products, from cars to fragrances and airline uniforms, coming to yield the company hundreds of millions of dollars in sales by the 1990s.

Though not believing in sexual categorization, Blass came to be quite open about his attraction to both women and men, alluding to the existence of secret same-sex couplings in Fort Wayne and New York. Blass also had a charming personality and had a wide range of associations, boasting friendships with everyone from fellow fashion icon Oscar de la Renta to top diplomat Henry Kissinger, though maintaining that he generally preferred to keep a certain emotional distance from others.

A regular smoker, Blass was diagnosed with throat cancer in the spring of 2000. The designer received waves of support from friends during his subsequent radiation treatments. He succumbed to the disease on June 12, 2002, passing away at his home in New Preston, Connecticut, at the age of 79. His autobiography, Bare Blass, was released a month later by HarperCollins.

The Blass fashion house has experienced some tumult since its founder’s death, going through several designers and even shuttering its doors at one point. In fall 2014 it was announced that designer Chris Benz would take over as creative director, with plans to launch the new Blass line online during fall 2015.