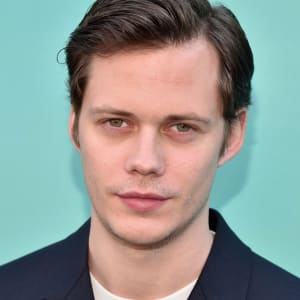 Bill Skarsgard is a Swedish actor best known for his sinister smile in the role of Pennywise, the scary clown in the 2017 film “It.”

Who Is Bill Skarsgard?

In addition to It, Bill Skarsgard is known for roles in Deadpool 2, Atomic Blonde and Allegiant. He was born in Sweden, on August 9, 1990, into a theatrical family: He is one of eight children, four of whom are actors, like their father, Stellan Skarsgard, who appeared in Good Will Hunting and films by director Lars Von Trier.

Skarsgard has seven other siblings, three of whom are also actors: Alexander, Gustaf and Valter. Two of his siblings are half-brothers are from his father's most recent marriage to Megan Everett.

Skarsgard has become widely known for his portrayal of the shape-shifting, evil clown Pennywise in the 2017 film version of Stephen King’s 1986 novel It.

For this children-eating clown, Skarsgard created an exaggerated smile, paired with the wide eyes of a creature about to feast. The facial expression gives the clown a maniacal, bloodthirsty look.

Skarsgard started making the scary smile as far back as age 10, he told late-night host Conan O’Brien, after he saw his older brother Gustav, also an actor, do it.

The clown’s fear-inducing expression appears in the teaser for It, which broke a record for the most views in a single day when it racked up 197 million views globally within 24 hours of its release.

Because the film stars children, Skarsgard was kept from the younger actors during early days of filming so that they would react naturally. When the children first saw him in character on set, he said in Interview magazine, “some couldn’t look at me, and some were shaking. This one kid started crying… But then we cut, and obviously I was all, ‘Hey, I’m sorry. This is pretend.’”

For the 2018 film Deadpool 2, Skarsgard joined the cast as an X-Force member named Zeitgeist, who brings a gross-out super power to the film: He spews acidic vomit that burns whatever it touches. But he doesn’t do too-much mayhem as he is part of a failed parachute landing.

Though Skarsgard has taken on a number of roles in thrillers, either action or horror, he told Jimmy Kimmel it wasn’t for a love of adrenaline: “I’ve become this genre actor now, but I never really got into the idea of being scared.”

Bill Istvan Günther Skarsgard, born in Vällingby, Sweden, began acting in small roles at age nine. He had plenty of family support for his profession. His father, actor Stellan Skarsgard, starred in television and theater, then when his international film career blossomed, the whole family traveled along to film sets. Along the way, Bill was captivated by the fact that creating a make-believe world was a job.

His break into movies came when he was cast in the only child role in the 2000 film White Water Fury, which starred his oldest brother Alexander.

For a 2017 edition of Interview magazine, Alexander interviewed Bill, who said it was Alexander’s participation in White Water Fury that landed him the job.

Bill also confessed that he once had other ambitions beyond acting: As a student, he had a notion to be a doctor, like their mother.

“I didn’t like the idea of being, at the time, number four of the Skarsgard actors — Dad, you, and our brother Gustaf. So in high school I majored in science and was like, ‘Maybe I’ll do something rebellious and become a doctor.’”

Since then, yet another Skarsgard sibling, who is five years younger than Bill, has also become an actor, making for a total of four of eight children. And there may be more to come to the stage, as two are very young, he told Kimmel.