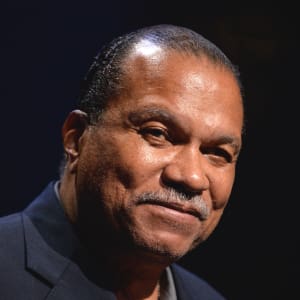 Actor Billy Dee Williams is a TV, film and stage icon particularly known for his roles opposite Diana Ross in ‘Lady Sings the Blues’ and ‘Mahogany’ as well as Lando Calrissian in the sci-fi epics ‘The Empire Strikes Back’ and ‘Return of the Jedi.’

Billy Dee Williams was born on April 6, 1937 in New York, NY. Having appeared on the Broadway stage as a child, he eventually developed a passion for acting as seen with an array of screen and stage work starting in the late 1950s. He received an Emmy nomination for his role in Brian's Song and became a national heartthrob due largely to his turns opposite Diana Ross in Lady Sings the Blues and Mahogany. He later became a blockbuster sci-fi legend with his role as Cloud City administrator Lando Calrissian in The Empire Strikes Back and Return of the Jedi. In addition to his acting pursuits, Williams is a visual artist and painter.

William December Williams was born on April 6, 1937, in New York, NY. Williams got into acting early, making his stage debut at seven years old in the 1945 musical Firebrand of Florence, though he wouldn’t return to the professional stage until adulthood. Williams went on to attend the High School of Music and Art in his home city as well as the National Academy School of Fine Arts, where he honed his skill as a visual artist. He later studied under acting legend Sidney Poitier at the Harlem Actors Workshop.

Williams made his big-screen debut in 1959’s The Last Angry Man. The next decade would see Williams appear in an array of TV series and movies while also joining the cast of the Broadway productions The Cool World (1960), A Taste of Honey (1960), Tiger Tiger Burning Bright (1962) and Hallelujah, Baby! (1967). Williams’ next theatrical film would be 1970’s The Out of Towners, starring Jack Lemmon and Sandy Dennis. The following year, Williams starred in the biopic Brian’s Song, which depicted the friendship between Chicago Bears athletes Brian Piccolo (played by James Caan) and Gale Sayers (Williams), with Williams receiving an Emmy nomination for his role.

Williams then made a major name for himself opposite Diana Ross in the Billie Holiday biopic Lady Sings the Blues, with the actor playing love interest Louis McKay. He later starred with Ross again in the 1975 film Mahogany, in which Williams portrayed an urban activist with romantic ties to Ross’ designer/model title character. Williams’ iconic, suave looks and worldly air thrilled moviegoers, with the media billing him as the black Clark Gable (a moniker reportedly stemming from former manager Berry Gordy). His heartthrob status was memorably evidenced by his guest turn on the popular sitcom The Jeffersons, on which he appeared as himself on the episode “Me and Billy Dee” as the perennial object of affection for housekeeper Florence Johnston (actress Marla Gibbs).

Other Williams big-screen films of this era included Hit! (1973), The Take (1974) and The Bingo Long Traveling All-Stars & Motor Kings (1976). He also portrayed Dr. Martin Luther King Jr. in the 1976 Broadway play I Have a Dream and ragtime creator Scott Joplin in a 1977 TV movie.

Lando Calrissian in 'Empire Strikes Back'

Williams’ fame took a different, blockbuster turn in 1980 when he starred as Lando Calrissian in The Empire Strikes Back, the sequel to George Lucas’ trailblazing production Star Wars, a sci-fi film regarded as a cinematic cornerstone that has spawned one of the most successful screen franchises of all time. Calrissian, the once treacherous, cape-wearing administrator of Cloud City who eventually joined the rebel forces, was a significant figure as well in 1983’s The Return of the Jedi. Calrissian has proved to be an enduring entity for the actor, with the character eventually having his own comic miniseries and Williams continuing to make appearances over the years at conventions.

The 1980s saw Williams continue to be a force on the screen with a role in the prime-time soap opera Dynasty as Brady Lloyd, the paramour of Dominique Deveraux (Diahann Carroll). He also played district attorney Harvey Dent in Tim Burton’s Batman (1989), starring Michael Keaton and Jack Nicholson. From the ‘90s into the new millennium, Williams has had a lower screen profile but nonetheless appeared in an array of projects, ranging from television appearances in A Different World, General Hospital, White Collar, and Modern Family to the films This Bitter Earth (2012) and voice over for The Lego Movie (2014).

During the ‘80s, Williams appeared as a spokesperson for the malt liquor Colt 45, again doing so in 2016, though controversy remains about the underlying messages for the campaigns and its targeted audience.

Williams has also continued to develop his craft as a painter, with his sometimes jazz-infused work having appeared in venues like the Schomburg Center for Research in Black Culture in New York and the Liss Gallery in Toronto.

Williams, who previously described himself in a 1980 People interview as somewhat tortured and searching for happiness, has been married and divorced three times. He has two children as well as a stepdaughter from his third wife Teruko. The actor/artist is also a professed spiritualist with interests that range from Eastern philosophies to astrology.