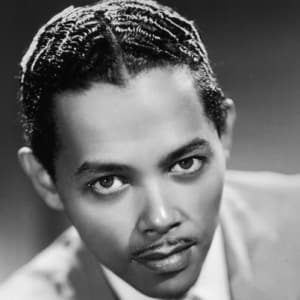 Billy Eckstine sang a number of romantic hits in the 1940s and ’50s, and was the bandleader of the first group that embraced the musical style of bebop.

Born in 1914 in Pittsburgh, Pennsylvania, Billy Eckstine sang in clubs before joining Earl Hines's band. From 1944 to 1947, he was a bandleader whose group worked in the emerging style of bebop. Eckstine was also a successful singer, crooning romantic hits such as "I Apologize" and "Blue Moon." His career declined in the 1950s, but he continued performing for decades before passing away in Pittsburgh in 1993.

William Clarence Eckstein, who became best known as Billy Eckstine over the course of his music career, was born on July 8, 1914, in Pittsburgh, Pennsylvania. He became interested in singing at a young age, and first performed at a church bazaar when he was 11 years old.

While a student at Howard University in 1933, Eckstine, by then the possessor of rich baritone, won a singing contest with his imitation of Cab Calloway. His prize was a week's engagement as a singer; following this, he left school in order to take gigs in places such as Buffalo, New York; Chicago; Pittsburgh and Washington, D.C.

In 1939, bandleader Earl Hines hired Eckstine to perform with his Grand Terrace Orchestra. As a part of that group, Eckstine was one of the first male African-American singers to succeed with romantic numbers, songs that put his emotional vibrato to good use. He had his first hit in 1940 with "Jelly, Jelly." Unfortunately, touring with Hines meant encountering discrimination and harsh treatment while traveling through the South.

Eckstine encouraged Hines to hire singer Sarah Vaughan, saxophonist Charlie Parker and trumpeter Dizzy Gillespie, musicians he would collaborate with for years to come. After leaving Hines's band in 1943, Eckstine worked in clubs as a solo act before starting his own band, the Billy Eckstine Orchestra, in 1944.

In addition to Vaughan, Parker and Gillespie, drummer Art Blakey and trumpeter Miles Davis were part of Eckstine's orchestral lineup. Eckstine and Vaughan were the group's vocalists; Eckstine also played the trumpet—having been taught by Gillespie—and trombone. The band and its cornucopia of talent embraced bebop, a new style of jazz.

Even while running his orchestra, Eckstine continued crooning romantic ballads as a solo artist, and his rendition of "Prisoner of Love" (1946) became a Top 10 hit. The proceeds from his singing also contributed to the financial upkeep of the band—despite its impressive array of musicians, the group was not a popular success, perhaps because bebop was still too new for the public.

Due to its economic troubles, Eckstine's band only stayed together until 1947. Afterward, he focused on his career as a solo performer. His voice was heard on romantic hits such as "I Apologize," "My Foolish Heart," "No One But You" and "Blue Moon." In the 1940s and '50s, Eckstine attained great success as a singer, releasing a number of gold records.

With an appeal that crossed racial boundaries, Eckstine became the first African-American singer to be featured on the cover of Life magazine. His sartorial style—with a loose tie and wide collar—was copied throughout the country. Eckstine also appeared in films, such as Skirts Ahoy (1952). However, race kept him from having the same kind of successful film career as contemporary singers like Bing Crosby.

Over the course of his singing career, Eckstine collaborated with Duke Ellington, Count Basie and Quincy Jones. He also continued to sing duets with Vaughan. In the 1960s, he worked with Mercury, Roulette and Motown Records.

During the 1970s, Eckstine recorded less often, though he continued to perform in locations like New York City, Las Vegas and Miami. His last album, Billy Eckstine Sings With Benny Carter, was made in 1986. Eckstine returned to Pittsburgh after suffering a stroke in 1992. He was 78 years old when he died at that city's Montefiore Hospital on March 8, 1993. Eckstine was married and divorced twice. At the time of his death, he was survived by his seven children: Ed, Guy, Billy Jr., Ronnie, Kenny, Gina and Charlotte, all of whom he had with his second wife Carolle Drake.