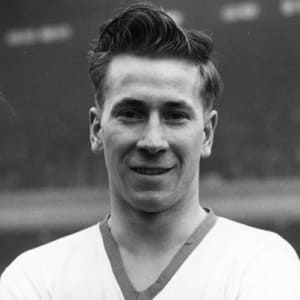 Bobby Charlton is best known for being one of England’s most accomplished soccer player of all time.

Robert "Bobby" Charlton was born into a family of soccer players on October 11, 1937, in Ashington, Northumberland, England. He began playing soccer at a young age, and became a professional soccer player for Manchester United at the age of 15. A record-breaking player, Charlton continued to hold records long after his retirement from the sport.

Robert "Bobby" Charlton, widely regarded as one of the best soccer players of all time, was born with the sport in his blood. He was born on October 11, 1937 in Ashington, Northumberland, England, to Robert "Bob" Charlton and Elizabeth "Cissie" Charlton (née Milburn), the sister of four renowned English soccer players and cousin of legendary footballer Jackie Milburn.

Charlton began playing soccer as a child, thanks to his fanatic mother who loved the sport and taught it to her children. At 15, he was spotted in action during a school game by Joe Armstrong, chief scout for the Manchester United soccer club. Charlton signed with United in early 1953, despite his mother's reluctance. As a result of her hesitation to let him commit to an insecure soccer career, Charlton began an apprenticeship as an electrical engineer. The following year Charlton became a professional soccer player, like his uncles and older brother, Jack, who was a member of the Leeds United club.

As a member of the Manchester United soccer team, Charlton played under the leadership of Matt Busby, who had advised him to apply to the Royal Army Ordnance Corps. Charlton had followed Busby's advice, applying in 1956. Charlton served his nation while simultaneously developing his soccer career.

By 1958, Charlton was an established player, having been a crucial part of the team that won the English Football League Championship the previous year. He was a member of the first English team to compete in the European Cup, and participated in the British Home Championship game against Scotland at Hampden Park: That was the start of his long, prolific, record-breaking and globally respected career, according to James MacCarthy, author of the book Manchester United: Born Winners.

In 1963, Charlton met with success when he and his teammates won the FA Cup Final. They had another successful season in the 1966 World Cup, during which Charlton participated in every game, and was named both the European Footballer of the Year and the Football Writers' Association's Footballer of the Year. In 1968, along with his team, Charlton became a European Cup winner. That same year, he was selected for the 1970 World Cup, and became the first man in English history to play in four World Cup tournaments.

Charlton retired from Manchester United in 1973, after a fall out with teammates Denis Law and George Best. He went on to manage Preston North End and Wigan Athletic, but found little success in his role as a director. In 1984, he became of the director of the Old Tafford club, a position he held through 2012. Charlton was knighted in 1994, and he was inducted into the Football Hall of Fame in 2002.

Flying back to England after a game in Belgrade during the 1958 European Cup semi-finals, a plane carrying the Manchester United team stopped to refuel in Munich, Germany. The snowy conditions of the day, February 6, led to an accumulation of slush on the runway, which caused trouble and caused the plane to crash into the airport's perimeter fence, slide 200 yards across a frozen field and burst into flames.

Charlton, who was aboard the plane, was spared severe injuries. While he was able to walk away from the wreckage, 22 people were killed in the crash.

Throughout his career, Charlton obtained 106 international caps, earning him entry into the exclusive circle of players with a Century of Caps. He won everything the game has to offer, according to the International Hall of Fame: International caps and goals, championships and Cup winner's medals.

But it was more than just his tremendous achievements that sparked instant recognition. It was also more than his grace, speed and athleticism. According to the International Hall of Fame website, "Charlton stood for something that the world admired. He was a gentleman, the ultimate in old-fashioned sporting heroes." Charlton didn't get in trouble or argue with referees, and he showed honesty and respect to his opponents.

According to the International Hall of Fame, "Had he not been so modest, there was a time when Bobby Charlton could have claimed, with some justification, that he was the most famous living Englishman."

In 2008, Charlton was honored with the BBC Sports Personality of the Year Lifetime Achievement Award. He was also given the freedom of the city of Manchester in 2009, at the age of 71.

Charlton married Norma Ball in 1961. They have two daughters, Suzanne and Andrea.