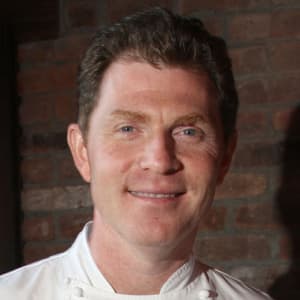 Bobby Flay’s frequent appearances and shows on the Food Network have made him one of America’s best-known chefs.

Born in New York City in 1964, Bobby Flay opened his first restaurant, Mesa Grill, in 1991, winning immediate acclaim. He made his first appearance on the Food Network in 1994 and soon became a television fixture in the vein of fellow celebrity chefs Mario Batali, Emeril Lagasse and Rachael Ray. Flay has hosted several Food Network shows, including Grill It! with Bobby Flay and Throwdown with Bobby Flay.

Chef and restaurant owner. Born Robert William Flay on December 10, 1964 in New York City, and raised on Manhattan's Upper East Side by divorced parents Bill and Dorothy Flay, Irish-Americans who bestowed red hair and freckles upon their son. From a young age, Flay showed a talent for cooking. He arranged his mother's grocery lists; whipped up complex after-school snacks; and even requested an Easy-Bake Oven as a Christmas gift. He was, however, markedly less interested in school. Flay bounced around several parochial schools before dropping out of high school at the age of 17.

His first professional restaurant job came in 1982, shortly after he left school. His father Bill, a manager for the famed Joe Allen's restaurant in New York's Theater District, called one day and ordered Bobby Flay to fill in for a sick busboy. "He told me—he didn't ask," Flay later recalled. This soon turned into a full-time job at Joe Allen's, where Flay moved from busboy to kitchen helper. His boss paid to send him to the French Culinary Institute in Manhattan, which Flay attended after earning his high school equivalency diploma. He received the institute's Outstanding Graduate Award in 1993.

After a brief, and unfulfilling, stint as a stockbroker's assistant on Wall Street, Flay went to work for a series of New York restaurants, most notably those of restaurateur Jonathan Waxman. Flay was fascinated by Waxman's use of spices and flavors from the American Southwest—a region Flay had never visited—and Southwestern cooking soon became Flay's signature food.

Bobby Flay opened his first restaurant, Mesa Grill, in 1991, winning immediate acclaim. Mesa Grill was awarded the coveted title of Best Restaurant 1992 by New York Magazine's revered food critic, Gael Greene. In 1993, Flay was named the James Beard Foundation's Rising Star Chef of the Year, a prize for talented chefs under 30. That same year, he opened Bolo Bar and Restaurant in New York City's Flatiron district, which also proved wildly popular with critics and diners alike. Flay followed that success with a second Mesa Grill in Las Vegas's Caesar's Palace in 2004; the bistro Bar Americain in 2005; Bobby Flay Steak in Atlantic City in 2006; Mesa Grill Bahamas in 2007; and a second Bar Americain at Connecticut's Mohegan Sun casino in 2009. Flay's chain of casual burger joints, Bobby's Burger Palace, opened in 2008 and has spread across the East Coast.Flay became a household name, and not only because of his restaurants. He made his first appearance on the Food Network in 1994, and soon became a television fixture in the vein of fellow celebrity chefs Mario Batali, Emeril Lagasse and Rachael Ray. Flay has hosted several Food Network shows, such as Grill It! With Bobby Flay and Throwdown With Bobby Flay, and also appeared in dozens of other specials. His frequent appearances on the Food Network have now made him one of America's best known chefs.

Not everyone was charmed by his television persona, however. When Flay challenged acclaimed Japanese chef Masaharu Morimoto on the Food Network hit Iron Chef in 2000, he climbed on his cutting board and raised his arms in a premature victory celebration (Flay ultimately lost) at the end of the cooking period. Morimoto was offended, calling Flay's actions disrespectful to Japan and to the profession. "He's not a chef," Morimoto said on the show. "Cutting boards and knives are sacred to us." Flay repeated his countertop victory cheer a year later when he defeated Morimoto in a rematch, though this time he tossed the cutting board to the floor first. Despite their initial feud, the two chefs have since become friends as well as co-stars on Iron Chef America.

With nine cookbooks on bookstore shelves, an ever-expanding family of restaurants and his own lines of signature spices, sauces, dishes and cookware, Flay's foodie empire continues to grow. The chef himself has hinted that he may start a new chapter in his life, if and when his food career eventually draws to a close. "I'm a proud native New Yorker," he said in a 2007 interview. "After my restaurant career I would like to go into politics at some point to help the city."

Flay married Debra Ponzek, another New York chef, in 1991. The couple divorced two years later. In 1995, he married Kate Connelly, the host of a now-defunct Food Network show whom he met as a guest on her program. The couple had one daughter, Sophie, in 1996 before divorcing. On February 20, 2005, Flay married his third wife, actress Stephanie March. The couple was introduced by actress Mariska Hargitay, March's co-star on the television series Law and Order: SVU. In 2015, it was announced the couple called it quits and Flay had filed for divorce.