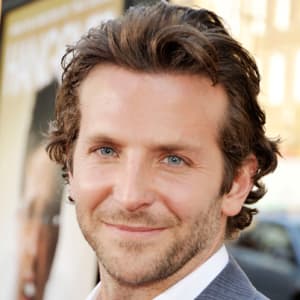 Bradley Cooper is an Oscar-nominated actor who first made a name for himself on the TV series ‘Alias’ and went on to star in films including ‘Silver Linings Playbook,’ ‘American Hustle’ and ‘American Sniper.’

Born on January 5, 1975, in Philadelphia, Bradley Cooper made his television debut with a guest spot on Sex and the City. He then acted both on TV and film, in shows such as The Street and Jack & Bobby and films such as Wet Hot American Summer and Carnival Knowledge. But it was the success of 2005’s Wedding Crashers that took Cooper's career to the next level, with subsequent roles in The Hangover, Valentine's Day and several other films. He's also received Academy Award nods for his work in Silver Linings Playbook, American Hustle and American Sniper.

Film and television actor Bradley Charles Cooper was born on January 5, 1975, in Philadelphia, Pennsylvania. With his rugged good looks and perfect comic timing, Cooper has become a film star on the rise. Acting was not his first passion, however. He developed a love of cooking at an early age. "I used to have buddies come over after kindergarten and I'd cook them food. I prided myself in taking whatever was in the fridge and turning it into lasagna," he told Entertainment Weekly.

Cooper put his culinary ambitions aside, however, after graduating from Georgetown University in 1997 with an English degree. Instead, Cooper turned his attention to acting. He enrolled in a master's degree program at the Actors Studio Drama School in New York City. While a student there, Cooper landed his first television commercial for a fast-food chain. He then made his TV debut two years later with a guest spot on the popular HBO show Sex and the City.

Cooper next appeared in the short-lived drama, The $treet, set in the financial world. Around this time, he made his first feature film appearance in the 2001 comedy Wet Hot American Summer. Cooper then returned to television to take on a supporting role in J.J. Abrams's popular spy series Alias (2001-06). For three seasons he played Will Tippin, a journalist friend of covert agent Sydney Bristow (played by Jennifer Garner).

During his time on Alias, Cooper made the independent drama Carnival Knowledge (2002) and the thriller My Little Eye (2002). He left Alias in 2003, and appeared in recurring roles on the sitcom Jack & Bobby (2004-05) and the crime drama Touching Evil (2004). Back on the big screen, Cooper played a brutish jock in the hit comedy Wedding Crashers (2005) with Owen Wilson and Vince Vaughn.

That same year, Cooper starred in his own television series Kitchen Confidential (2005-06), based on the book by famed chef Anthony Bourdain. The show received positive reviews, but it did not do well enough in the ratings to stay on the air. Not afraid to take risks, Cooper made his Broadway debut in 2006, appearing in the drama Three Days of Rain with Julia Roberts and Paul Rudd. That December, Cooper married actress Jennifer Esposito. The union did not last long, as Esposito filed for divorce four months later.

After the success of Wedding Crashers (2005), Cooper landed more comedic film roles. He appeared in the romantic comedy Failure to Launch (2006) with Matthew McConaughey and Sarah Jessica Parker. While that film was met with a tepid response, Cooper enjoyed some box office success with Yes Man (2008) co-starring opposite Jim Carrey. He also appeared in the 2009 comedy He's Just Not That Into You, inspired by the popular self-help book. In the film, Cooper played an adulterous husband.

Later that year, Cooper further proved his comedic talents with The Hangover. He co-starred with Ed Helms and Zach Galifianakis in this buddy comedy. The three actors play friends who travel to Las Vegas for a bachelor-party weekend with their soon-to-be-married pal, played by Justin Bartha. After a night of debauchery, they wake up to find their buddy missing along with their memories of what happened the previous evening. The film was so successful that two sequels were produced in 2011 and 2013.

Cooper then starred with Sandra Bullock on the 2009 romantic comedy All About Steve, which performed poorly at the box office. His next project fared much better, however, when he played the boyfriend of Eric Dane in the ensemble comedy Valentine's Day (2010), which also featured Jennifer Garner, Jessica Alba and Patrick Dempsey. Cooper followed up with a remake of the popular television action series The A-Team during the summer of 2010. In addition to Cooper, the cast included Liam Neeson, Quinton Jackson and Jessica Biel.

The crossover into more action-packed roles continued with Cooper's role in the film Limitless, which was released in 2011. Cooper took on the lead role in the film that was based on the 2001 novel The Dark Fields, by Alan Glynn. The thriller co-starred Robert De Niro and received favorable reviews. Cooper subsequently starred in more action roles, such as Hit and Run (2011) and The Place Beyond the Pines (2012), but the breakout role that got him recognized at the Academy Awards was Silver Linings Playbook (2013), directed by David O. Russell.

Cooper continued his collaboration with Russell to great rewards, starring in the ensemble cast of the '70s-era American Hustle (2013). Cooper received another Oscar nomination, this time in the supporting actor category for his role as FBI agent Richie DiMaso. (In early 2015, it was announced that Cooper, Lawrence and Russell would have another go at the Oscars with a film based on the life of inventor Joy Mangano, with Lawrence taking the lead.)

In 2014, Cooper was heard in cinemas as the voice of Rocket Raccoon in the blockbuster summer film Guardians of the Galaxy, based on the Marvel comic-book series. During the fall, the actor made his return to Broadway with the lead role in The Elephant Man, a successful revival of the 1979 play focusing on the life of Joseph Merrick. In April 2015, he received a Tony nomination for his performance. Late 2014 also saw the actor as lead in the Clint Eastwood film American Sniper, based on the life of Navy SEAL Chris Kyle and co-starring Sienna Miller. Cooper received his third Oscar nomination for the role.

The next year, Cooper starred as a military contractor in the little seen Aloha, followed by a role in the zany ensemble comedy Wet Hot American Summer, airing on Netflix. In the autumn on the big screen, he portrayed an acerbic two-star Michelin chef aiming to make a comeback in Burnt, co-starring Miller, Uma Thurman and Emma Thompson. Also in 2015, Cooper made two movies with Jennifer Lawrence: Serena and Joy. Upcoming projects include directing his first film, a remake of A Star Is Born, which he will star in opposite Lady Gaga.