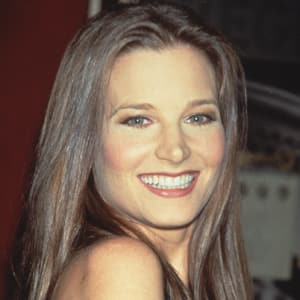 Bridget Fonda is a film actor and the daughter of Peter Fonda, the granddaughter of Henry Fonda, and the niece of Jane Fonda.

The granddaughter of Henry Fonda, daughter of Peter Fonda, and niece of Jane Fonda, Bridget Fonda made her film debut with a non-speaking role in the 1982 comedy Partners. In the 1990s, she starred in Single White Female, Cameron Crowe's Singles, and Point of No Return (1993), among others. She has also appeared in Quentin Tarantino’s Jackie Brown and Sam Raimi’s A Simple Plan.

Actor. Born January 27, 1964 in Los Angeles. The granddaughter of Henry Fonda, daughter of Peter Fonda and niece of Jane Fonda, Bridget got her first taste of acting in a high-school production of Harvey while at the Westlake School for Girls in Los Angeles. Although she suffered severe stage fright during her early years, she went on to attend the Tisch School of the Arts at New York University, where she majored in theater, as well as the Lee Strasberg Theatre Institute.

Fonda made her film debut with a non-speaking role in the 1982 comedy Partners. Six years later, she appeared in You Can't Hurry Love (this time with lines) and opposite Phoebe Cates in the beach flick Shag. She followed these parts with two leading roles: as real-life British call girl Mandy Rice-Davies in Scandal and the star of the favorably reviewed Strapless.

By the early 1990s, Fonda had earned a reputation as a serious actress and began to work steadily in features, starting with a small but memorable role as a reporter in The Godfather Part III in 1990. From there, she starred in Single White Female and Cameron Crowe's Singles (both 1992), Bodies, Rest and Motion (1993), Point of No Return (1993) and It Could Happen to You (1994). Having demonstrated her ability to play the comedic heroine who is luckless in love, she took on a different type of role as a perpetually stoned, ill-fated beach bunny in Jackie Brown (1997). The following year, she portrayed another atypical character in A Simple Plan, earning raves as Bill Paxton's pregnant, increasingly crazed wife.

Fonda has dated screenwriter Lee Drysdale, actor Eric Stoltz, whom she met on the set of Singles and singer Dwight Yoakam. She is married to composer Danny Elfman.