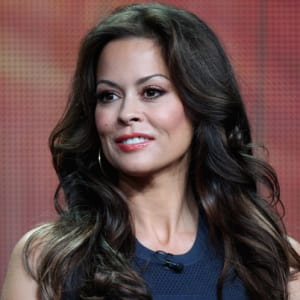 Brooke Burke is a fitness model, entrepreneur and television celebrity best known for her stint as co-host of ABC’s hit show ‘Dancing with the Stars.’

Who Is Brooke Burke?

Born in Hartford, Connecticut on September 8, 1971, and raised in Tucson, Arizona, Brooke Burke has parlayed her exotic looks due to her French-Irish-Portuguese heritage into a career as a model, television host and entrepreneur. She reached huge audiences when she began co-hosting ABC's Dancing with the Stars with Tom Bergeron in 2010. Burke is also an author, publishing her first book, The Naked Mom: A Modern Mom’s Fearless Revelations, Savvy Advice, and Soulful Reflections, in February 2011.

Brooke Lisa Burke was born in Hartford, Connecticut, on September 8, 1971. She is the oldest of seven children and grew up in Tucson, Arizona. Brooke Burke's striking looks developed at an early age, due to her ancestry: Her mother, Donna, is Jewish, while her father, George, is of French, Irish and Portuguese heritage. It is believed that Burke is a direct descendent of the French knight William De Burgo, who settled in Ireland during the 12th century.

Although as a student Burke wanted to be a drummer in a rock band, she won her first beauty pageant at age 14. When she accompanied a friend to a Scottsdale, Arizona, modeling agency for moral support, Burke was discovered by a talent agent. By age 18, she was a busy print model, being featured in swimsuit calendars, and on billboards and magazine covers. Taking the advice of friends, Burke moved to Los Angeles to study broadcast journalism at UCLA.

While still studying in Los Angeles, Burke's career picked up when she worked with major modeling agencies such as Ford and Wilhelmina. She appeared in several popular advertisements, swimsuit editorials, posters and commercials.

Burke's career turned a major corner in 1997 when she was cast as the host of Wild On, a series on the fledgling E! Entertainment cable network. An adrenaline-packed reality show about partying in exotic locations around the world, Wild On presented Burke to more than 400 million homes in 120 countries during her three-year stint as host, eventually leading her to celebrity status.

She also appeared in films and made guest appearances on several television shows, including That's Life (2000), The Bernie Mac Show (2001), Monk (2002) and Less Than Perfect (2002). Burke continued working extensively as a fitness and bikini model, and appeared on the cover of Playboy in 2001. She also became a favorite of other men's magazines like Maxim, FHM and Stuff.

Proving her skills as an entrepreneur, Burke launched online company BabooshBaby.com, a specialty line of must-have items for expectant mothers, in 2007. She also co-owns the website ModernMom.com, which shares secrets and tips on motherhood and fitness after childbirth.

Burke is also an author. Her first book, The Naked Mom: A Modern Mom's Fearless Revelations, Savvy Advice, and Soulful Reflections, was published in February 2011.

Burke has been married twice: From 2001 to 2005, she was married to Dr. Garth Fisher, a plastic surgeon, with whom she has two children, daughters Neriah Shae Fisher and Sierra Sky Fisher. In 2011, she wed actor and former Baywatch star David Charvet, with whom she also has two children, daughter Heaven Rain Charvet and son Shaya Braven Charvet. However, the couple had separated by early 2018, and Burke went on to file for divorce in April.

"Although I believe this is a positive change, I am deeply saddened because I loved being married," she wrote on ModernMom. "It took me a long time to differentiate between giving up and letting go, and even longer to recognize when it was time to do so. We are still a family full of love, simply redefining our dynamics. I believe this is a necessary decision for my entire family unit."

As fanatical as Burke is about fitness and working out, she does have health challenges; She suffers from Hashimoto's disease, also called chronic lymphocytic thyroiditis or autoimmune thyroiditis, a form of chronic inflammation of the thyroid gland. She also has melasma, a facial skin discoloration that often afflicts women during pregnancy.

In November 2012 Burke announced she had thyroid cancer on her blog. She continued to blog about the experience, both before and after undergoing surgery, as part of efforts to raise awareness about the importance of preventive checkups.