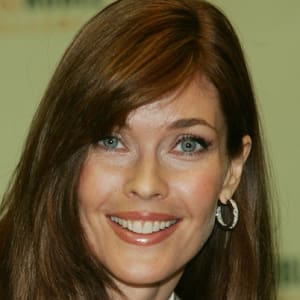 Model Carol Alt appeared on more than 700 magazine covers including Vogue and Sports Illustrated. She later wrote books about the raw food movement.

Model Carol Alt was born in College Point, New York on December 1, 1960. A photographer discovered her while she was waitressing at a local steak house. She dropped out of college and by 1980 appeared on the cover of Harper’s Bazaar. Her career laid the foundation for the “supermodel” trend that exists today. She had an Italian film career and in the 2000s wrote books about the raw food movement.

Actress. Born Carol Alt on December 1, 1960, in College Point, New York. Alt's father, Anthony, was a New York City fire chief. Her mother, Muriel, was an airline employee and former model. Despite her precocious good looks and early exposure to modeling, Alt says, "I was totally not interested in fashion as a child. I was a tomboy. I was more interested in passing the football and getting on the hockey team."

After graduating from high school, Alt enrolled at Hofstra University in 1979 on an Army ROTC scholarship. In addition to attending classes and participating in military drills, Alt waited tables at a local steak house. One day a photographer walked into the restaurant and told her she should be a model. He took Alt to the Elite Modeling Agency, where fashion mogul John Casablancas took one look at the leggy beauty and offered her a contract on the spot. Shortly after their first meeting, Alt dropped out of college to pursue a modeling career full time. Alt's decision to quit college infuriated her parents. "The one tip I gave her was, don't do it," her mother recalls.

Success As a Model

Alt enjoyed immediate success as a model. In 1980, only a few months after leaving Hofstra, she appeared on the cover of Harper's Bazaar. Two years later, Alt landed on the cover of the 1982 Sports Illustrated swimsuit edition, one of the most coveted covers in all of fashion. Propelled by this early success, Alt went on to become one of the most ubiquitous faces of the 1980s. She graced the covers of more than 700 magazines including Vogue, Cosmopolitan, Mademoiselle and Playboy. Life magazine called Alt "the next million dollar face" and Playboy proclaimed her "the most beautiful woman in the world."

In addition to her photo shoots, Alt worked as a runway model for Calvin Klein and Ralph Lauren. Her long list of lucrative advertising campaigns included Lancôme, Cover Girl, Pepsi and General Motors. Expanding the traditional boundaries of the modeling industry, in the early 1980s Alt posed for a series of five posters. When Elite rejected the project, Alt self-produced the posters and they became huge bestsellers, sparking a new trend in the modeling business. "From then on it's been, if you're a supermodel you have a poster," Alt says. Through her omnipresence at newsstands and her forays into posters and calendars, Alt charted a course for a new kind of model, the supermodel. John Casablancas has called Alt "the model that started the supermodel trend."

Despite her enormous success as a model, Alt decided to switch the direction of her career in 1986 and try her hand at acting. She made her film debut that same year in the Italian film Via Montenapoleone. Alt found a niche market in Italy and acted in dozens of Italian films and TV shows, using voice dubbing until she learned to speak Italian fluently. Alt has also turned in several notable performances in American films and TV shows. In 1991, she starred in the TV movie Vendetta: Secrets of a Mafia Bride and in 1997, she played opposite Howard Stern in Private Parts. Alt flashed her comic side with guest appearances on the animated series Family Guy and King of the Hill, and she also starred in the 1999 drama series Amazon. In 2008, Alt appeared on Donald Trump's reality TV competition Celebrity Apprentice. She competed for her charity, the Tony Alt Memorial Foundation, and came in third.

In the early 2000s, Carol Alt underwent another career makeover as a raw foods specialist and author. In 2004, she published her first book Eating in the Raw: A Beginner's Guide to Getting Slimmer, Feeling Healthier, and Looking Younger the Raw-Food Way. She followed that with the 2007 release of The Raw 50: 10 Amazing Breakfasts, Lunches, Dinners, Snacks, and Drinks for Your Raw Food Lifestyle. Both books landed on bestseller lists. Inspired by the success of her raw foods books, Alt expanded into fiction, releasing her debut novel, This Year's Model, in 2008. The following year, she published a sequel entitled Model, Incorporated.

Despite being one of the most successful supermodels of all time, Alt claims, "I never thought I was the most beautiful model out there or the most sexy woman." Instead, Alt chalks up her success to hard work and creativity. "My career was what it was," she says, "because I was creative and eccentric and a maverick in a time when people weren't. Everything I do, I'm trying to communicate with the world around me."