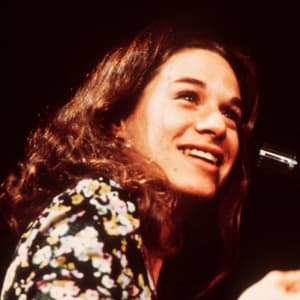 American singer and songwriter Carole King has written or co-written over 400 songs that have been recorded by more than 1,000 artists.

Born in New York City in 1942, singer and songwriter Carole King has written or co-written over 400 songs that have been recorded by more than 1,000 artists. Many of her most popular works – including "Will You Love Me Tomorrow" for The Shirelles, "Take Good Care of My Baby" for Bobby Vee and "You Make Me Feel (Like a Natural Woman)" for Aretha Franklin – were written in partnership with her first husband, Gerry Goffin.

Singer; songwriter; pianist. Born Carol Klein on February 9, 1942, in Manhattan, New York, and raised in Brooklyn, Carole King's amazing musical gift was apparent from the time she was a toddler. Already an accomplished pianist by the time she turned 10, King began writing a multitude of songs by her early teens. At James Madison High School, she chose the new last name "King" for herself as a stage name and formed her first quartet, the Co-Sines.

She attended Queens College in New York, where she met Neil Sedaka, Paul Simon and Gerry Goffin—all future famous songwriters like herself. She briefly dated Sedaka, who produced a hit song entitled "Oh! Carol!"; her response ("Oh! Neil!") did not do nearly as well.

Despite that minor setback, however, she forged ahead with her career and began a romantic relationship and songwriting partnership with Goffin. After she became pregnant at the age of 17, the couple quickly married in 1960 and continued to write impressive songs. The duo so impressed music publisher Don Kirshner that he signed them to his Aldon Music empire, where they established themselves immediately by writing the hit singles "Will You Love Me Tomorrow" for The Shirelles, "Take Good Care of My Baby" for Bobby Vee and "Up on the Roof" for the Drifters.

As the 1960s progressed, the Goffin/King partnership flourished and the couple wrote dozens of hit singles, including "You Make Me Feel (Like a Natural Woman)" for Aretha Franklin, "Goin' Back" for Dusty Springfield (and later The Byrds) and "Pleasant Valley Sunday" for the Monkees. Though she never felt out of place as a woman navigating the testosterone-heavy world of the music industry, King did realize she was different from her housewife peers: "Living with Gerry in New Jersey suburbia, I was surrounded by the wives of doctors, accountants, lawyers. With a pen in one hand and a baby in the other, I was a real oddity: a working woman."

The Goffin/King partnership came under increasing strain as the 1960s continued. Even as their songwriting matured, their relationship fell apart as Goffin's numerous infidelities took their toll. (According to a biography by Sheila Weller, King even helped buy a house for one of his mistresses and a daughter they had together.) King and Goffin jointly formed a small record label, Tomorrow, but it soon disintegrated along with their marriage. King famously documented her relationship's collapse in her 1967 solo song, "The Road to Nowhere." King and Goffin divorced the following year and she officially began her solo career.

In 1968, she moved with her two daughters to Laurel Canyon in Los Angeles to join fellow musicians James Taylor and Joni Mitchell, among others, in a creative songwriting community. She met Toni Stern, a female lyricist, with whom she wrote the single, "It's Too Late," a song that would later become one of her biggest hits as a singer. Of that era she later recalled, "Toni was wonderful help with the transition from writing with Gerry to writing songs on my own … I didn't have the courage initially. James inspired me a lot. I write heavily under the influence of James Taylor."

Around the same time, King signed to Lou Adler's Ode label and briefly formed a group called The City with Danny Kortchmar and Charles Larkey; she would later marry Larkey in 1970. The City only put out one album, Now That Everything's Been Said. The group didn't tour because of King's stage fright; the album was therefore never promoted fully and The City fell apart. By the end of 1970, King began to devote herself exclusively to singing her own songs.

Going Solo as a Singer

Although her first solo effort, Writer, would prove to be a bust, her second album, Tapestry, released in 1971, would go on to stay at No. 1 on the Billboard charts for a record-breaking 15 weeks; it stayed on the charts in some form for a stunning six years. Tapestry remained the longest-tenured album in the top spot until it was finally beaten out by Michael Jackson's Thriller in 1982. As fellow songwriter Cynthia Weil said: "Carole spoke from her heart, and she happened to be in tune with the mass psyche. People were looking for a message, and she came to them with a message that was exactly what they were looking for." Some of the hits from Tapestry were earlier King compositions reclaimed in her own voice, such as "It's Too Late" and "Will You Love Me Tomorrow?" She also added some new singles: "So Far Away," "I Feel the Earth Move" and "You've Got a Friend" (later a No. 1 hit for her friend James Taylor).

Her follow-up album, Music (1971), produced a No. 1 hit in "Sweet Seasons" and reached gold but failed to achieve the soaring status and sales of its predecessor. King's next few albums, Rhymes and Reasons, Wrap Around Joy, Fantasy and Thoroughbred, were all certified gold as well. With Thoroughbred, she reunited with ex-husband Gerry Goffin, and collaborated with James Taylor, David Crosby and Graham Nash.

Her marriage to Larkey lasted until their divorce in 1976. Soon after, she entered her third marriage, to songwriter Rick Evers, in 1977. They relocated to Idaho and lived in a tiny mountain town that fostered King's love of nature and inspired an environmental activism that would shape her life in subsequent decades. However, although they collaborated on the album Simple Things, which would be among King's last to be certified gold, the relationship soured as Evers became increasingly abusive. The union ended when he died of a drug overdose in 1978.

King's next two releases, Welcome Home and Touch the Sky, were not as well received as previous works. She achieved more commercial success in 1980 with Pearls, which contained performances of earlier songs co-written with Goffin. Later, King mainly wrote singles for film, television and other artists, effectively ending her career as a singer for a number of years.

The 1980s and 1990s saw a dip in her prolific songwriting, but not her active lifestyle. King has been working with the Alliance for the Wild Rockies since 1990, advocating for the passage of the Northern Rockies Ecosystem Protection Act (NREPA); she testified before Congress twice in support of the legislation. She also became involved in electoral politics, later becoming a strong supporter of Democratic candidates John Kerry and Hillary Clinton in 2004 and 2008, respectively.

By the late 1990s, King was ready to launch something of a comeback in the music industry. She penned the hit "The Reason" for Celine Dion in 1997 and later performed it alongside the Canadian singer at VH1's Divas Live concert. In 2004, King recorded a well-received live album on her Living Room Tour. More recently, in 2007 she bridged divides of generation and genre by touring Japan with R&B star Mary J. Blige and Fergie of the Black Eyed Peas. In 2010, she linked up with longtime friend James Taylor for the Troubadour Reunion Tour. The resulting Live at the Troubadour album hit No. 4 on the U.S. charts and confirmed Carole King's lasting power as a force in the music industry. During the course of her long career, she has penned over 400 songs that have been recorded by more than 1,000 artists. When a reporter asked her what she would say now if she could give advice to her younger self, King said simply: "You're going to have a very rich and wonderful life."

Having divorced her fourth husband, Idaho rancher Rick Sorenson, King remains happily single and independent in her mountain home. Of her surroundings in the wilderness she says, "When I wake up every morning, I smile and say, 'Thank you.' Because out of my window I can see the mountains, then go hiking with my dog and share her bounding joy in the world."

In 2013, King made music history as the first woman to receive the Gershwin Prize for Popular Song. President Barack Obama gave her this honor at a special ceremony held at the White House. Around the time she received this award, the legendary singer-songwriter told the Associated Press that she will continue making music and performing. "I still feel that it would be lovely to retire, but that time is not yet here apparently," she said.