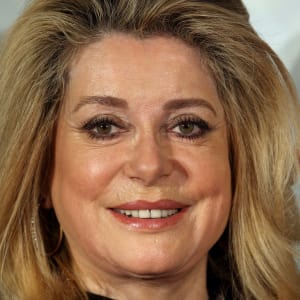 Who Is Catherine Deneuve?

Actress Catherine Deneuve was born on October 22, 1943, in Paris, France. In the 1960s, she became a star with her breakout performance in the romantic musical Les Parapluies de Cherbourg (1964; The Umbrellas of Cherbourg). She went on to establish herself as one of the leading ladies of international cinema in films including Repulsion (1965), Belle de Jour (1967) and The Hunger (1983). Deneuve has received two César Awards from the French Academy of Cinema for The Last Metro (1980, directed by François Truffaut) and Indochine (1992, directed by Régis Wargnier), for which she was also nominated for an Academy Award.

Catherine Deneuve was born Catherine Dorléac on October 22, 1943, in Paris, France. The daughter of two actors, she chose to enter the same profession. Adopting her mother's last name, Deneuve made her film debut at age 13, in Les Collégiennes (The Twilight Girls).

Life as a Star

Denueve's breakout performance came playing a young girl in love in the musical Les Parapluies de Cherbourg (The Umbrellas of Cherbourg) in 1964. In her next role, Deneuve showed her versatility as an actress, portraying a sexually repressed woman whose neuroses lead her to become a killer in the psychological thriller Repulsion (1965), directed by Roman Polanski.

In another star turn, Denueve starred as a housewife turned prostitute in 1967's Belle de Jour, directed by Luis Buñuel. With her success, came opportunities to act in a range of films including comedies, dramas and musicals, working with some of French cinema’s top directors. She appeared in François Truffaut’s La Sirène du Mississippi (1969; Mississippi Mermaid) and Le Dernier Métro (1980; The Last Metro); Jacques Demy’s Peau d'Âne (1970; Donkey Skin), Jean-Pierre Melville’s Un Flic (1971; Dirty Money), and Claude Berri’s Je Vous Aime (1980; I Love You All). Although Deneuve mainly focused on French productions and co-productions, including the French-Italian-Spanish film Tristana (1970), she has appeared in several American films, including The April Fools (1969) with Jack Lemmon, Hustle (1975) with Burt Reynolds and the cult vampire film The Hunger (1983) with David Bowie and Susan Sarandon.

Deneuve's timeless beauty led to opportunities outside of film. She became the face of Chanel perfume during the 1970s. For part of the 1980s, she was the model for Marianne—the symbolic embodiment of the French Republic—and her image was used on coins and stamps.

Denueve is a prolific artist, who has always continued to act, making more than 100 movies. In her later career, she appeared in Indochine (1992), directed by Régis Wargnier and Lars von Trier's Dancer in the Dark (2000), which starred Björk. Additional films include in 8 Femmes (2002; 8 Women), Potiche (2010) and Les Bien-Aimés (2011; Beloved). The screen legend also made a guest appearance on the TV series Nip/Tuck in 2006.

In 1981, Deneuve received a César Award (France's equivalent to an Academy Award) for her work in Le Dernier Métro (The Last Metro). She was awarded her second César for her performance in Indochine (1992); she also received an Academy Award nomination for that film. Deneuve was selected by the European Film Academy to receive a Lifetime Achievement Award in December 2013.

Along with her parents, Deneuve's sister, Françoise Dorléac, was also an actress. The two played sisters onscreen in the movie Les Demoiselles de Rochefort (The Young Girls of Rochefort). Dorléac died in a car accident in 1967, the same year the film was released.

Deneuve had a relationship with French director Roger Vadim, who directed some of her early films, and is the father of her son Christian Vadim (born in 1963). She was married to English photographer David Bailey from 1965 to 1972. She was also involved with Italian actor Marcello Mastroianni, the father of her daughter Chiara Mastroianni (born in 1972). Deneuve also had relationships with Irish cinematographer Hugh Johnson, whom she met on the set of The Hunger, as well as the French television executive Pierre Lescure.

Both of Deneuve's children are actors with whom she has appeared in films, including Ma Saison Préférée (1993; My Favorite Season) with daughter Chiara and Le Temps Retrouvé (1999; Time Regained) with son Christian.

Speaking Out Against the #MeToo Movement

In January 2018 Deneuve, along with more than 100 prominent French women in the entertainment industry, publicly denounced the #MeToo Movement through a written statement in the French newspaper Le Monde. In it, the women say that the movement had become a "witch hunt" and confuses seduction with violence.

Excerpts of the letter include the following:

"Rape is a crime. But insistent or clumsy flirting is not a crime, nor is gallantry a chauvinist aggression,' the letter begins. 'As a result of the Weinstein affair, there has been a legitimate realization of the sexual violence women experience, particularly in the workplace, where some men abuse their power. It was necessary. But now this liberation of speech has been turned on its head."

Deneuve and the women also denounced the "puritanism" the movement has displayed, which they believe threaten the French traditions of courtship:

"This expedited justice already has its victims, men prevented from practicing their profession as punishment, forced to resign, etc., while the only thing they did wrong was touching a knee, trying to steal a kiss, or speaking about "intimate" things at a work dinner, or sending messages with sexual connotations to a woman whose feelings were not mutual."

In a letter countering Deneuve and company, #MeToo supporters accused them of "banalizing sexual violence and of trying to set back progress."

The #MeToo Movement began in the fall of 2017, when women in Hollywood began publicly speaking out against entertainment producer Harvey Weinstein, accusing him of sexual assault and misconduct. Since then women from all industries and walks of life have stepped out to name their own sexual accusers, forcing many notable men to leave their positions of power.

French women who've supported the movement in America have also created their own hashtag: #Balancetonporc (translation: Expose Your Pig).

A few days later the group letter was published, Deneuve penned another essay in response to the backlash, which appeared in Libération. Attempting to clarify her position, she wrote: "I don’t like this characteristic of our times whereby everyone feels they have the right to judge, to arbitrate, to condemn. … I don’t decide the guilt of these men because I am not qualified to do so." She went on to emphasize her concern that this "climate of censorship" would lead to a "purging of the arts."

Distancing herself from some of the controversy, Deneuve referred to one colleague's claim that women could experience an orgasm during rape as "spitting in the face of all those who have suffered this crime." She also cited her feminist cred for signing Simone de Beauvoir's 1971 manifesto in defense of abortion rights, and rejected the support of the "conservatives, racists and traditionalists of all kinds" who spun the intent of the group letter for political gain.

"I am a free woman and I will continue to be," she wrote. "I warmly salute all the victims of odious acts who may have felt offended by the letter published in Le Monde, it’s to them and them alone that I apologize.”