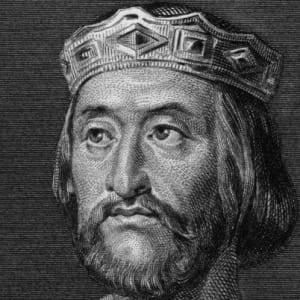 Charles III, also known as Charles the Simple, reigned as king of France from 893 to 922, during which time he implemented the Treaty of Saint-Clair-sur-Epte.

Charles III, also known as Charles the Simple, was born to King Louis II and his second wife, Adelaide. After initially being overlooked for the throne as a child, he was crowned king of France by nobles in 893, and became the solitary ruler after the death of King Eudes in 898. Charles III is best remembered for having created the Treaty of Saint-Clair-sur-Epte. A new king, Robert I, was crowned in 922. Robert I was killed by Charles III the following year. Charles III was imprisoned and died in 929.

King of France Charles III, also known as Charles the Simple, was born on September 17, 879, in France. His father, King Louis II, also known as Louis the Stammerer, ruled France from 877 to 879, and died before Charles was born. Louis II fathered Charles with his second wife, Adelaide, after already having two children—Louis III and Carloman II—from his first marriage to Burgundian Princess Ansgarde. Charles's half-brothers rose to power and shared the throne after Louis II's death in 879. When Louis III died in 882, Carloman became the solitary king of France.

Following Carolman's death in 884, his cousin, Charles the Fat, took the throne. During this time, Charles III, as a child of a union that was viewed as illegitimate, was deemed unfit to inherit the kingdom. Charles the Fat, who had earned a reputation as a weak ruler, was removed from the throne in 888 and succeeded by King Eudes (also known as Odo), who was chosen after defending Paris from the Vikings.

While King Eudes ruled, unrest grew among the population, as citizens wanted a king with royal Carolingian blood, namely Charles III. Eventually, Charles III gained the attention of notables and was crowned king by Fulk, archbishop of Reims, on January 28, 893. A struggle for power ensued between the two royals, and it wasn't until Eudes's death, on January 1, 898, that King Charles III became the nation's sole ruler.

Even after taking on the role as the unquestionable ruler of France, Charles III was still heavily influenced by others during his rule, including Robert I, King Eudes's brother. One of Charles's most memorable actions as king was defeating Rollo, leader of the Vikings, during an attack on Paris in the early 10th century. Not only did Charles III defeat Rollo and the Vikings, he negotiated a treaty with them in 911—the Treaty of Saint-Clair-sur-Epte—to ensure that the Vikings would end their terror, in exchange for giving Rollo part of the French territory within Neustria (later known as Normandy).

Fall From Power and Death

Despite his noteworthy accomplishment, the Neustrian nobles resented Charles III for his preferential treatment of the nobles in another territory known as Lorraine. Their resentment turned to revolt when they elected Robert I, who'd already established a reputation as a suitable leader due to his success in the military, as the new king in 922. The following year, Charles III battled Robert I near Soissons, and though Robert was killed, his accompanying party still won the battle. As a result, Rudolph, duke of Burgundy and son-in-law of Robert I, rose to power, while Charles was arrested—making him the only king of Carolingian lineage to have been forcibly removed from the throne. He died several years later, on October 7, 929, in Péronne.