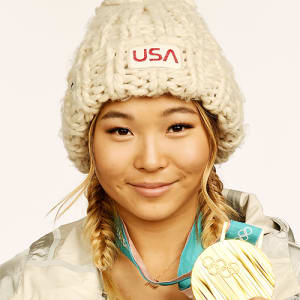 Chloe Kim is a professional snowboarder who, at 17, won a gold medal in the women’s snowboard halfpipe competition at the 2018 Olympic Winter Games in Pyeongchang, South Korea.

Who Is Chloe Kim?

Snowboarder Chloe Kim (born April 23, 2000, in Long Beach, California) was 17 years old when she won a gold medal in the women's snowboard halfpipe competition at the 2018 Olympic Winter Games in Pyeongchang, South Korea. She first went snowboarding when she was four, and has credited her father with providing the support necessary to develop her prodigious talent in the sport. In addition to her native English, Kim speaks French and Korean.

On February 13, 3018, Kim scored 98.25 in her third snowboard halfpipe run at the Olympic Winter Games in Pyeongchang, South Korea. This result placed her almost ten points ahead of her closest competitor.

Before taking her third and final run, Kim was aware she'd already scored well enough to get the gold medal. However, she still went all out, completing back-to-back 1080s (which means she did three spins in the air, then repeated the feat on the opposite side). Kim was the first female snowboarder to do this at the Olympics. Afterward she explained, "I just knew that I wasn’t going to be completely satisfied taking home the gold and knowing that I could have done better."

There to watch her win were Kim's parents, who are originally from South Korea, her sisters and several other family members, including her grandmother. It was the first time Kim's grandmother, who lives in South Korea, got to see her compete. Kim told CNN, "At the end of the day, I'm so grateful that I get to be out here and represent the U.S. in the country that my family came from. It's a very big blessing."

Via her Twitter account, @chloekimsnow, Kim garnered further attention in between runs when she tweeted, "Wish I finished my breakfast sandwich but my stubborn self decided not to and now I’m getting hangry." And after being asked how it felt to stand atop the Olympic podium, a relatable Kim said she hadn't wanted to cry and ruin her eyeliner.

Though 2018 marks Kim's Olympic debut, she's been competing for years at the U.S. Grand Prix, the X Games, the Dew Tour and other events.

Kim qualified for the 2014 Olympic Winter Games, which took place in Sochi, Russia, but was too young to compete. Talking to CNN, she said, "I think I was a little bummed out then, but now that I look back at it, I think I'm kind of glad that I wasn't old enough to go last time. It's too much stress for a 13-year-old."

Kim got a silver medal at the X Games at age 13. In 2015 she won gold at the X Games. The next year she earned two more gold medals (one at the X Games in Aspen, another in Oslo). This made her the first athlete in these games to have three golds before turning 16.

A 15-year-old Kim debuted her back-to-back 1080s at the U.S. Grand Prix in Park City, Utah. She was the first female snowboarder to do this in competition and received a perfect score of 100.

In 2016, Kim participated in the Youth Olympic Games, which were held in Lillehammer, Norway. She won halfpipe and slopestyle snowboarding gold medals.

Kim first got the opportunity to snowboard at the age of four, when her father took her to California's Mountain High resort. Kim has said she was "bait" — apparently her father wanted her mother to join him on the slopes, and thought their young daughter's presence would encourage this.

Kim's mother didn't take to snowboarding, but Kim demonstrated a talent for the sport from the start. She soon joined Mountain High's snowboarding team and first competed at six years old. The next year she medaled at junior nationals.

At the age of eight, Kim went to live with an aunt in Switzerland. She spent two years in Europe because her parents wanted her to learn French, but the time abroad also increased her love of snowboarding. As a third grader, she was on the Swiss snowboard team. When her father visited, the pair would go to the slopes together; on one trip, he realized that his daughter had the potential to become an Olympic-level athlete.

Kim's father ended up leaving his job in order to focus on her training. Back in California, Kim became part of a developmental program at Mammoth Mountain. Traveling the 350 miles from the family home in La Palma took more than five hours, but her father made the drive every weekend. In 2016, Kim described the trips: "What would happen is that he would carry me out of bed. I would wake up in a new spot every time without even knowing what happened."

Kim's father also had her learn to ride with either foot forward, a useful skill. Being a skateboarder also bolstered Kim's snowboarding ability. And she credits her family's work ethic with providing further inspiration.

What Is Chloe Kim's Net Worth?

Exact details about Kim's net worth are unknown, but she'll benefit financially from winning a gold medal at the Olympics. When she was 11, snowboarding company Burton began sponsoring her. She has many other sponsors, including Nike, Toyota, Visa, Samsung, Target, Mondelez and Oakley. In addition, she's the first North American ambassador for Laneige, a Korean beauty company.

Kim's real estate holdings include an apartment building in South Korea and a home in Las Vegas. And with a lifetime supply of Skittles, she'll never go hungry.

When Was Chloe Kim Born?

Kim's mother is Boran Yun and her father is Jong Jin Kim. Yun and Jong Jin met while in Switzerland. Kim's two older sisters, Tracy and Erica, are a product of Jong Jin's first marriage, which ended in divorce.

Jong Jin immigrated to the United States from South Korea in 1982, coming over with just $800. He worked several minimum wage jobs before getting an engineering degree. His career and real estate investments made him financially successful, which enabled him to stop working in order to support his daughter's snowboarding. Kim began to epitomize the "American dream" for her father; he told ESPN, "As an immigrant, I could put my proud Korean last name in the American history books."

Talking about her father, Kim has said, "He sacrificed so much for me. I get in a lot of arguments with him, but at the end of the day, I'm so grateful for his support and just the way he believed in me when no one else did."

Kim visited South Korea often while growing up, and is able to speak Korean. At the request of the U.S. State Department, she participated in a goodwill tour of the country in February 2017.

Her snowboarding ability prompted the Korean Ski Association to inquire — and proffer a lucrative incentive — if Kim would compete for that country. Being almost guaranteed a spot at the Olympics was tempting, yet Kim and her family decided they wanted her to be on the American team. As her mother told ESPN, "Chloe's American."

In the eighth grade, Kim started homeschooling. And as part of Mammoth High's Independent Learning Center, she was able to follow an Internet-based curriculum.

Kim plans to attend college, perhaps Harvard University, in order to prepare for the future. She once told NBC, "Snowboarding is a huge part of my life, but I also feel like it’s important to have a plan B or a back-up plan for after my career because I can’t snowboard for my whole life competitively."