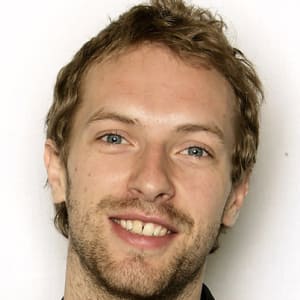 Chris Martin is lead singer, rhythm guitarist and pianist for the alternative band Coldplay. The group has won multiple Grammy Awards over the years, one being for their debut album.

Who Is Chris Martin?

Chris Martin was born on March 2, 1977, in Exeter, Devon, England. He attended University College London, where he met Will Champion, Guy Berryman and Jonny Buckland, who would go on to form the band Coldplay. With Martin as lead singer, rhythm guitarist and pianist, Coldplay's debut album, Parachutes, sold 5 million copies and won a Grammy. Martin married Gwyneth Paltrow in 2003. The couple separated in 2014.

English musician Chris Martin was born Christopher Anthony John Martin on March 2, 1977, in Exeter, Devon, England, the eldest of five children to a teacher and an accountant. His interests in music developed at a young age and he formed his first band, The Rocking Honkies, while he was attending the prepatory Exeter Cathedral School.

After continuing his studies at another independent school, Martin attended University College in London, where he graduated with a degree in Ancient World Studies. During the college's orientation week in 1996, he met guitarist Jonathan "Jonny" Buckland and the two decided to form a band, with the chosen name Pectoralz. By 1997, the band (renamed Starfish by this time) had recruited Guy Berryman on the bass and Will Champion on the drums.

In 2000, the band, now known as Coldplay, released their debut album, Parachutes. The album was a commercial success, peaking at No. 1 on the U.K. charts and entering the top half of the U.S. Billboard 200 with hits like "Yellow," "Trouble" and "Don't Panic." The album eventually became certified seven-time platinum. It received the Best British Album Award at the 2001 Brit Awards and won the 2001 Grammy Award for best alternative music album.

The group also released their second album A Rush of Blood to the Head in 2002. The album proved to be another success with songs including "In My Place," "Clocks" and "The Scientist," and the group went on a nine-month tour to North America, Europe and Australia. The tour was filmed live for the Live 2003 DVD. They also picked up two more Grammy Awards. "Clocks" won record of the year and "In My Place" was named best rock performance by a duo or group with vocal. Since their early wave of success, Coldplay has continued to thrive. Additional albums include X&Y, Vida La Vida, Prospekt's March, LeftRightLeftRightLeft and Mylo Xyloto, all released to rave reviews.

In recent years, Coldplay has been quite busy. They released the album Ghost Stories in 2014, which featured such songs as "Magic" and "A Sky Full of Stars." The following year, Coldplay put out A Head Full of Dreams. The band soon landed one of music's most high-profile gigs. Coldplay performed as part of the halftime show at Super Bowl 50 in February 2016.

In addition to Coldplay, Martin has written a variety of songs for solo acts including British pop group Embrace and the singer Jamelia. In 2005, he collaborated with musician Nelly Furtado on the track "All Good Things (Come to an End)" from her third album Loose (2006). In 2006, he worked with rapper Jay-Z for the song "Beach Chair" for his album Kingdom Come. Martin has also collaborated with Swizz Beatz and Kanye West.

In addition to making musical statements, Martin also has a strong social agenda. He campaigned for fair trade in Haiti and the Dominican Republic and contributed to Band Aid 20 to aid Sudanese refugees in Darfur.

Backstage at a concert in 2002, Martin met actress Gwyneth Paltrow, daughter of actress Blythe Danner. The couple married a year later, in December 2003. The couple had two children together, daughter Apple Blythe Alison Martin and son Moses Bruce Anthony Martin—born in 2004 and 2006, respectively—before separating in March 2014. "It is with hearts full of sadness that we have decided to separate," Paltrow wrote in a post on her website GOOP following the announcement. "We have been working hard for well over a year, some of it together, some of it separated, to see what might have been possible between us, and we have come to the conclusion that while we love each other very much, we will remain separate."