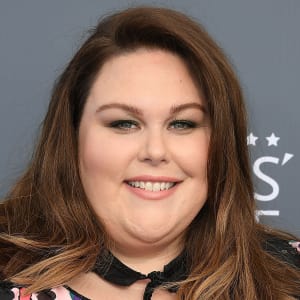 Actress Chrissy Metz became a role model for women struggling with weight and body-image issues when she began playing Kate Pearson on the critically acclaimed NBC drama ‘This Is Us.’

Who Is Chrissy Metz?

Previously an unknown actress with only a handful of TV and movie credits, Chrissy Metz shot to stardom for a lead role not often seen in a prime-time TV drama – a plus-sized woman whose story struck a chord with thousands of women who were just like her.

Before landing the part of Kate in This Is Us in 2016, Metz, then 35, was considering leaving Los Angeles for good to return to her native Florida as acting opportunities seemed to be drying up.

Just like her character Kate in This Is Us, Metz has struggled with her weight all of her life. However, Metz revealed that signing up for her NBC role contractually required her to lose weight as part of her character's journey. While no set weight goal was stipulated in the contract, Metz had already begun shedding pounds after she found out she snagged the part, admitting it was a motivating factor.

“That was a win-win for me. Because it’s one thing to try to do it on your own," she told TVLine. "But as human beings, it’s an ego thing: We’re more likely to do something for someone else. I just have to be very clear. Whether or not I lose weight or stay the same, it’s purely a choice of mine for health. Not because I think that plus-size, curvy, voluptuous, big bodies aren’t attractive — because I think they’re awesome and sexy."

Metz had just eight acting jobs between 2005 and 2014. The roles were mostly small ones, in forgettable films such as Loveless in Los Angeles (2007) and The Onion Movie (2008) and television roles including one identified as just “counter girl” on HBO’s Entourage and another as a character named “Chunk” on the NBC comedy My Name Is Earl.

The uncertainty of her life and career during those years even led to an incident that Metz refers to as her “breakdown” – a panic attack on her 30th birthday in 2010 that she mistook for a possible heart attack, landing her in a hospital emergency room. After that, she underwent therapy and developed an interest in spirituality and self-help.

In 2014, she started to play the role that Metz considers to be her first big break – the recurring character of Ima Wiggles, a sideshow “fat lady” — in the fourth season of American Horror Story on FX, subtitled Freak Show. The role gave her an opportunity to work alongside top stars such as Jessica Lange, Kathy Bates and Sarah Paulson.

Still, opportunities were far and few between when she auditioned for the role of Kate Pearson on This Is Us. Up until the moment she got the call from the show’s producer, Metz was convinced she had blown the audition and would soon be packing up to move back East.

Since This Is Us premiered in September 2016, Metz has been nominated for one Emmy Award and two Golden Globes, with no wins.

Penniless When She Won 'This Is Us' Part

When she received a phone call from This Is Us creator and executive producer Dan Fogelman just hours after she auditioned to tell her that she won the part, Metz thought the phone call – from a number she did not recognize – was probably from a bill collector. At the time, she had 81 cents in her bank account, she said later.

Christine Michelle Metz was born on Sept. 29, 1980, in Homestead, Fla. When she was six months old, her family – father, mother, an older sister and older brother – moved to Japan after her father, a naval officer, was transferred to a naval base there. Metz would live in Japan for the first eight years of her life.

Her parents divorced when she was eight, and her mother moved Metz and her siblings back to Florida. She says she never really knew her father. Her mother later remarried. Metz has two half-sisters from her mother’s second marriage.

After college, Metz worked briefly as a pre-school teacher in Florida until she went along with one of her half-sisters to an “open audition” and talent search event in Gainesville. Her sister was 14, thin, and seeking work as a model. Metz had developed a singing voice in high school and she sang Christina Aguilera’s “Beautiful” at the audition.

One of the talent agents suggested she move to Los Angeles, where the agent would make introductions for her. Metz was 22 and for the next 14 years, auditioned for acting jobs with infrequent success. Among other jobs she held in those years, Metz worked as her own agent’s assistant, which helped her learn about auditions.

In 2008, Metz married Martyn Eaden, a freelance writer from Great Britain, but the two separated in 2013. They were divorced in 2015.

Metz’s current boyfriend is reported to be Josh Stencil, a member of the crew on This Is Us (a “camera grip”). The two met on the set.

As a self-described “plus-size” woman, Metz acknowledges that her weight has been an issue for most of her life, starting with her childhood in balmy Florida, where swimsuits and other summer clothing are worn virtually year-round.

She is also well-aware that movie and TV roles are scarce for women with bodies like hers. In interviews, she says she never sought to become a role model for other women who look like her, but she is more than comfortable with that.

“I’ve had women — average women, older women, teenagers —  who say to me, ‘Your role and this show has changed my life’,” Metz says. “That makes all the struggle, all the ramen noodles, all the times when I couldn’t pay my bills, all the times where I was like, ‘I can’t do this,’ worth it. Sometimes I cry on the way to the set still. There is something that happens when you are grateful: You continue to keep receiving blessings. So I will always be grateful.”

Autobiography: 'This Is Me'

In the spring of 2018, Metz published an autobiography, This Is Me: Loving the Person You Are Today. Tracking her journey from childhood to her ups and downs in Hollywood and the end of her marriage, she recalled the difficult relationships with both her father and stepfather, and such industry experiences as auditioning for American Idol and lunch with Oprah Winfrey.