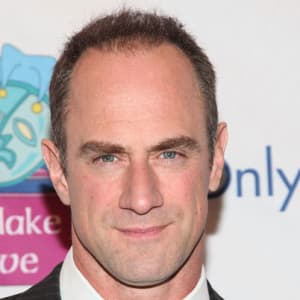 Born in 1961, actor Christopher Meloni started out in television in comedy, appearing in two failed shows in the late 1980s. In 1998, he landed a break-out role in the prison drama Oz. He then became one of the good guys on Law & Order: SVU in 1999. For 12 seasons, Meloni co-starred with Mariska Hargitay on the hit crime series. He left the show in 2011 and joined the cast of True Blood the following year.

Born and raised in Washington, D.C., actor Christopher Meloni is the son of an endocrinologist and a stay-at-home mom. He admits that he was a bit of trouble maker growing up. "I did some bad things — a little vandalism, stealing stuff," Meloni told People magazine. "I was the guy whose parents always had to come in for meetings at school."

A football player in high school, Meloni made the switch to acting in college. He attended the University of Colorado in Boulder. While he was officially a history major, Meloni took several drama courses. He even took time off from school his junior year to try to break into the entertainment business. After an unsuccessful stint in Los Angeles, Meloni returned to the university and completed his degree in 1983.

Soon after, Meloni moved to New York City, and honed his craft as a student at the Neighborhood Playhouse. He worked in construction and other jobs to support himself during the early days of his acting career. In the late 1980s, Meloni began to land some television work. He appeared in two short-lived series: the football comedy 1st & Ten and The Fanelli Boys, a sitcom about a group of brothers.

Meloni has always made the most out of every role. In the late 1990s, he gave a series of memorable performances on such shows as NYPD Blue and Homicide: Life on the Street. He excelled at being a tough guy with his intimidating stature and presence. In the prison drama Oz, Meloni appeared as the ultimate baddie — serial killer Chris Keller.

He seemed to embrace this dark and disturbing character, giving a critically acclaimed and highly nuanced performance. Audiences were also deeply engrossed in Keller's relationship with fellow inmate Tobias Beecher (Lee Tergesen), a former lawyer imprisoned for killing someone while driving drunk.

In 1999, Meloni enjoyed another wave of success. He appeared in the romantic comedy Runaway Bride as a jilted fiancé of Julia Roberts. On television, Meloni debuted his most famous character, Detective Elliot Stabler, on Law & Order: Special Victims Unit. On the show, he and Mariska Hargitay play a pair of detectives who investigate sexually related crimes. In 2006, Meloni received an Emmy Award nomination for his work on the series.

Since beginning his role on Law & Order: SVU, Meloni has taken on a variety of other projects. He showed off his comedic talents in 2001's summer camp spoof Wet Hot American Summer, appearing opposite David Hyde Pierce, Janeane Garofalo, Bradley Cooper and Paul Rudd. While not a box office hit, the movie has become a beloved comedy cult classic. Meloni also appeared in 2009's independent film Brief Interviews with Hideous Men, directed by John Krasinski.

In 2011, Meloni announced that he would be leaving Law & Order: SVU at the end of its twelfth season. His co-star Hargitay, like many of the show's fans, was saddened by news. She said in a statement: "For the past 12 years, Chris Meloni has been my partner and friend, both on screen and off. He inspired me every day with his integrity, his extraordinary talent and his commitment to the truth. I love him deeply and will miss him terribly — I'm so excited to see what he'll do next."

Since his departure from Law & Order: SVU, Meloni has landed a role on the supernatural drama True Blood. On the popular series, he plays "an ancient, powerful vampire who holds the fate of" the show's two lead vampires (Stephen Moyer and Alexander Skarsgard) "in his hands," explained True Blood creator Alan Ball. Meloni is also slated to appear in the latest film version of the Superman saga, Man of Steel, set to be released in 2013. Other film projects include the independent drama Small Time and a Jackie Robinson biopic entitled 42.

Meloni is married to production designer Sherman Williams. They have two children, Sophia and Dante. Mariska Hargitay — who became very good friends with Meloni while working on Law & Order: SVU — is Sophia's godmother.