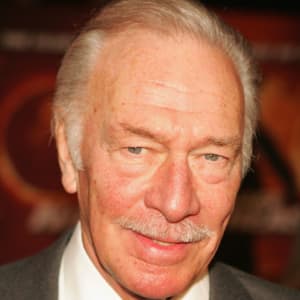 Regarded as one of the most brilliant Canadian actors of his generation, Oscar-winner Christopher Plummer played Captain Von Trapp in the 1965 movie ‘The Sound of Music,’ among dozens of other projects.

Who Is Christopher Plummer?

Award-winning actor Christopher Plummer was born on December 13, 1929, in Toronto. He was classically trained as a stage actor and headlined for Britain's National Theatre, making his film debut in 1958's Stage Struck. Throughout his career, he has passed up blockbuster movies for smaller films. Nonetheless, he is probably best known as Captain Von Trapp in the 1965 musical movie The Sound of Music. Plummer has also won Tony Awards for his work in Cyrano (1973) and Barrymore (1997) and later won a supporting actor Oscar for the film Beginners.

Born Arthur Christopher Orme Plummer on December 13, 1929, in Toronto, Ontario, Canada, Christopher Plummer is regarded as one of the top actors of his generation. He grew up in Montreal as an only child and his mother exposed him to the arts at an early age, taking him to see many plays and performances. Plummer first studied the piano before devoting himself to acting. As he told Playbill, "I thought seriously of becoming a concert pianist." Plummer changed his mind after deciding that playing the piano professionally "was very lonely and very hard work."

Classically trained as a stage actor, Plummer was discovered by English producer and director Eva Le Gallienne. She gave him his first New York stage role in 1954's The Starcross Story with Mary Astor. While that show consisted of only one performance, Plummer soon landed more stage work, later headlining for Britain's National Theatre and Royal Shakespeare Company.

After a number of TV roles, Plummer made his film debut in 1958's Stage Struck, directed by Sidney Lumet. The following year, he picked up his first Tony Award nomination for the play J.B. and an Emmy Award nomination for his work on the television show Hallmark Hall of Fame with the episode "Little Moon of Alban." His career began to take off with roles on stage and screen.

In 1965, Plummer shot to international stardom with the hit musical film The Sound of Music. He played the widower Captain Von Trapp, a man who eventually falls for Maria, the young nun (Julie Andrews) he hires to care for his seven children. The film is based on the real-life Von Trapps, who indeed fled Austria during the rise of Nazi regime, though the film took a fair amount of liberties with the musical family's true history.

While The Sound of Music was a big success, Plummer had mixed feelings about the project. He has admitted that he looked down on the role and the movie at the time. As he wrote in his 2008 memoir In Spite of Myself, he had been "a pampered, arrogant young bastard, spoiled by too many great theatre roles" and "still harboured the old-fashioned stage actor's snobbism toward moviemaking."

Before long, Plummer returned to the stage. He won his first Tony Award in 1974 for his portrayal of the title character in Cyrano. A bit later, Plummer picked up his first Emmy Award for the 1976 miniseries The Moneychangers, based on the novel by Arthur Hailey. He also had several notable film roles from this era, including The Return of the Pink Panther (1975) with Peter Sellers, The Man Who Would Be King (1975) with Sean Connery and Michael Caine, and International Velvet (1978) with Tatum O'Neal.

Plummer sought out a range of acting challenges in the 1980s. He appeared on Broadway as Iago in Othello (1982) and then as the title character in Macbeth (1988). On the small screen, he appeared in such projects as the hit miniseries The Thorn Birds (1983) and as a narrator for the children's movie The Velveteen Rabbit (1985).

One of Plummer's most powerful film performances occurred in the 1990s. He received accolades for his uncanny portrayal of TV journalist Mike Wallace in Michael Mann's The Insider (1999). Plummer later turned in strong performances in such films as the 2001 intellectual drama A Beautiful Mind and the 2003 thriller Cold Creek Manor.

Continuing to be in demand, Plummer took on a variety of projects from the 2004 action adventure tale National Treasure with Nicolas Cage, to the 2005 romantic comedy Must Love Dogs with Diane Lane. Also in 2005, Plummer played a lawyer in George Clooney's critically acclaimed political drama Syriana. He found time to return to the stage, appearing on Broadway in William Shakespeare's King Lear in 2004 and Jerome Lawrence's Inherit the Wind in 2007, opposite Brian Dennehy. Plummer earned two more Tony Award nominations for these productions. In addition to his film and stage work, he has also lent his distinctively rich voice to several animated films, including the 2009 blockbuster hit Up.

Despite his tremendous talents as an actor, Plummer didn't receive an Academy Award nomination until 2010. He earned a best supporting actor nod for his portrayal of Russian literary great Leo Tolstoy in The Last Station (2009). His on-screen wife, played by Helen Mirren, was also nominated. He finally won his first Oscar in 2011 for his work in Beginners (2010), co-starring Ewan McGregor, with Plummer playing a gay father coming out in his later years.

Despite being in his 80s, Plummer has shown no interest in retiring. He recently toured with his one-man show A Word or Two and co-starred with Shirley MacLaine in the romance Elsa & Fred (2014). In 2015, Plummer shared the screen with Al Pacino, Annette Bening, Jennifer Garner and Bobby Cannavale in Danny Collins.

In late 2017, after numerous accusations of sexual misconduct against Kevin Spacey, Plummer was tapped to replace Spacey for the J. Paul Getty biopic All the Money in the World. Despite stepping in for reshoots just weeks before the film's planned release, Plummer impressed critics enough to earn Golden Globe and Academy Award nominations for Best Supporting Actor.

Plummer has been married three times. He and his first wife, Tony-winner Tammy Grimes, are the parents of Tony-winning actress Amanda Plummer.