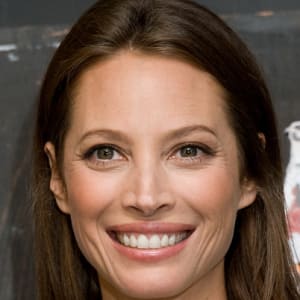 Christy Turlington is one of America’s most successful models. Best known for her work for Maybelline, she has appeared on more than 300 magazine covers.

Model Christy Turlington was born January 2, 1969, in Walnut Creek, CA. Her modeling career began when a photographer asked to take her photo while she was horseback riding and it found its way to a modeling agency. Today, she is one of the country's most successful models. Best known for her work for Maybelline, Calvin Klein and Georgio Armani, she has appeared on more than 300 magazine covers.

Model and philanthropist Christy Turlington was born January 2, 1969, in Walnut Creek, California. Turlington's father is European-American and her mother is from El Salvador. She grew up in the San Francisco Bay Area with her sisters Erin and Kelly. Her mother worked as a flight attendant.

Turlington was only 14 years old when a photographer asked to take her photo while she was horseback riding. The photo landed in the hands of a modeling agency, and two years later, she joined the Ford modeling agency. Turlington soon became one of the country's most successful models. One of her first major campaigns was for Calvin Klein and she worked with the brand for roughly two decades.

Declared by the Metropolitan Museum of Art as the "Face of the 20th Century," Turlington was considered part of the supermodels clique of the 1990s, which includes Naomi Campbell, Cindy Crawford, Claudia Schiffer, and Linda Evangelista. In fact, she, Campbell and Evangelista were sometimes referred to as the "trinity" of models during this era. The trio even appeared together in singer George Michaels' video "Freedom! '90."

In the mid-1990s, Turlington returned to school. She attended New York University where she earned a bachelor's degree in 1999. Now in her forties, Turlington remains in demand as a model. She is a spokesperson for Maybelline cosmetics line as well as a brand ambassador for Imedeen supplements. Turlington still appears in fashion magazines as well.

Off the runway, Turlington has explored many different business ventures over the years. She was the co-founder of Fashion Café along with such other models as Naomi Campbell and Claudia Schiffer. Turlington also branched out into skincare with Sundari, an ayurvedic skinclare line. A devoted fan of running and yoga, she also developed an active women's clothing line for Puma. Turlington appeared in the fashion films Catwalk, Unzipped, and Pret-a-Porter.

An advocate of health and humanitarian issues, Turlington is an anti-smoking activist (her father died of lung cancer), a yoga enthusiast, and a maternal health advocate. In 2010 she debuted No Woman, No Cry, a documentary exploring maternal health around the world, which she directed. Around this time, she co-founded Every Mother Counts, a non-profit organization that aims to educate people on maternal mortality. Turlington is currently pursuing a master's degree in public health at Columbia University.

Turlington has been married to actor-filmmaker Edward Burns since 2003. Before Burns, she had been romantically linked to actors Roger Wilson, Christian Slater and Jason Patric. Turlington and Burns have two children together—a daughter, Grace, born in 2003, and a son, Finn, born in 2006. Her sister Kelly is married to Burns' brother Brian Burns.