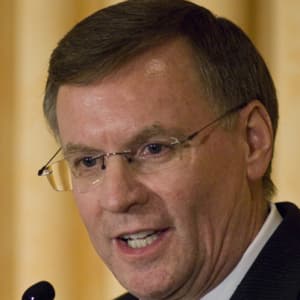 Chuck Baldwin is a politician, writer, conservative pastor and radio talk show host. He was the Constitution Party’s presidential candidate for the 2008 election.

Chuck Baldwin was born on May 3, 1952, in La Porte, Indiana. He established the Crossroad Baptist Church in Florida. In addition to his ministering duties, he began hosting the radio talk show Chuck Baldwin Live in 1994, sharing his conservative Christian views with listeners. He has also written several literary works, including books, articles and columns, and was the Constitution Party’s presidential candidate for the 2008 election.

Politician, pastor and radio talk show host Chuck Baldwin was born Charles Obadiah Baldwin on May 3, 1952, in La Porte, Indiana. A conservative pastor and radio personality, Baldwin is a strong force within the Constitution Party; he was the party's vice-presidential candidate for the 2004 election, and its presidential candidate in 2008. Growing up, Baldwin was exposed to another form of public service: His father, Ed Baldwin, a professional welder, served as a lay preacher to prison inmates for decades.

After graduating from high school in 1971, Baldwin attended Midwestern Baptist College in Pontiac, Michigan. While enrolled there, in 1973, he married Connie Kay Cole. The couple later moved to Lynchburg, Virginia, and Baldwin began studying theology at the Thomas Road Bible Institute (now the Liberty Bible Institute at Liberty University).

Baldwin went on to establish the Crossroad Baptist Church in Pensacola, Florida, in 1975. The conservative church has grown substantially over the years, attracting visits from such famous evangelists and politicians as Jerry Falwell and Pat Buchanan. It even received a special acknowledgement from President Ronald Reagan in 1985.

In addition to his ministering duties, Baldwin began hosting a radio talk show, Chuck Baldwin Live, in 1994. On the show, he had discussed politics and various current events, offering his perspective as a conservative Christian.

Baldwin has also published several literary works, including the books Subjects Seldom Spoken On and This Is The Life, and countless articles and columns for newspapers, magazines and websites.

In 2004, Baldwin served as the Constitution Party's nomination as candidate for vice president, running with presidential nominee Michael Peroutka. He won the party's nomination for president four years later, beating out Alan Keyes by a wide margin at the party's convention in April 2008. Darrell Castle was his vice-presidential running mate. Baldwin's candidacy received a boost later that year, when he was publicly endorsed by former presidential hopeful Ron Paul.