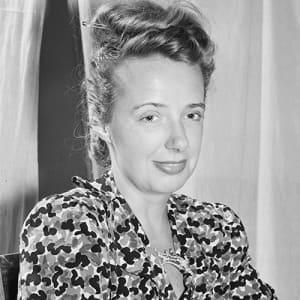 Claire McCardell was an award-winning 20th century American fashion designer, who created American sportswear. Some of her most famous looks include the Monastic and Popover Dress.

Who Was Claire McCardell?

Born in 1905, Claire McCardell was one of the most famous American fashion designers of the 1940s and 50s. Though her aesthetic seems plain compared to many of her fashion colleagues of the era (the industry was heavily influenced by the sophistication of French fashion), that is precisely what made McCardell's work so revolutionary. She democratized fashion by creating clothes that were both functional and stylish with an added touch of tomboyish sensibility. Her designs were representative of the sporty modern American woman, with her signature looks including the Monastic and Popover Dress and Capezio ballet flats.

The "Monastic Dress" or "Monk Dress" was a tent-like dress that fell from the shoulders and hung loosely, giving shape to a woman's body comfortably by way of a belt.

The "Kitchen Dinner Dress" was part of a line of separates McCardell introduced in the early '40s. Made of cotton, it consisted of a skirt with an attached apron.

The idea of the "Popover Dress" came to McCardell after Harper's Bazaar challenged designers to create a look that a woman could wear both day (cleaning the house) and night (attending a cocktail party). McCardell's original creation was a simple grey dress with a pocket that fit a matching potholder.

McCardell is known for her pioneering use of comely fabrics such as calico, chambray, denim and wool. Her fashion innovations include mix-and-matching separates, open-backed sundresses, spaghetti strings, rivets and ballet flats (which she conceived as a way of dealing with the leather rations during World War II.)

McCardell authored the book What Shall I Wear? The What, Where, When and How Much of Fashion, which was published in 1955 by Simon & Schuster.

Among her fashion awards, McCardell won a Coty Award (1943), a Best Sportswear Designer Award (1946), a Neiman-Marcus Award (1948), and a Woman of the Year Award from the Women's National Press Club (1950), which was presented by President Harry S. Truman and First Lady Bess Truman.

At the height of her popularity, McCardell graced Time magazine in 1955. In 1990 she was named one of Life's most influential Americans of the 20th century, and eight years later had fashion retrospectives at The Metropolitan Museum of Art and the Fashion Institute of Technology.

At one point abhorring her aesthetic, fashion editor and columnist Diana Vreeland later changed her mind and championed McCardell's work. From then on, the two became close friends.

The eldest of four siblings, Claire McCardell was born on May 24, 1905 in Frederick, Maryland to Eleanor and Adrian who was president of a bank and a Maryland state senator. McCardell showed a keen interest in fashion at a young age and wanted to pursue her studies in New York, but at the urging of her protective father, she enrolled at a local college. However, her dream of studying in the Big Apple would come true two years later when she matriculated to Parsons, which included a study abroad program in Paris at the Place des Vosges.

McCardell married architect Irving Drought Harris in 1943 and was stepmother to his two children from a previous marriage.