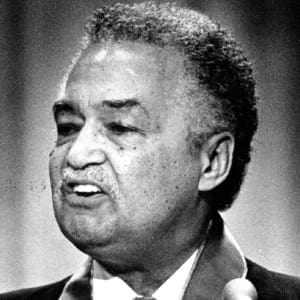 Politician, activist and labor leader Coleman Young was the first African American to be elected mayor of Detroit. He also became the city’s longest-serving mayor.

Coleman Young was born on May 24, 1918, in Tuscaloosa, Alabama. Young was a labor activist who helped found the National Negro Labor Council in 1951. He was elected to the Michigan Senate in 1964. In 1968, Young became the first African American on the Democratic National Committee. In 1973, he became the first black mayor of Detroit. Young served five terms in office. He died on November 29, 1997, in Detroit, Michigan.

Coleman Alexander Young, generally known as Coleman Young, was born on May 24, 1918, in Tuscaloosa, Alabama. He was the first of five children born to William and Ida Young. In 1923, the family moved to Detroit, Michigan, hoping to escape the violence, racism and political inequality that African Americans in the South had to endure.

Young attended both public and Catholic schools in Detroit. As he was one of the top students in his graduating class at Eastern High School, Young was eligible for a scholarship. However, he was not offered enough support to cover other costs besides tuition. As a result, Young could not afford to attend college.

Young instead took a job with the Ford Motor Company as an assembly line worker. He also became a participant in labor union efforts, particularly in support of the rights of African-American workers. Though his union activities led to the loss of his job at Ford, Young still continued to work as a labor organizer.

With the advent of World War II, Young was drafted into the military. He served as a bombardier with the Tuskegee Airmen, though he never saw combat. Young had nearly completed his service when he was arrested for attempting to desegregate an officer's club in Indiana.

Returning to Detroit after the war, Young resumed his work as a union organizer, eventually becoming the director of organization for the Wayne County branch of the Congress of Industrial Organizations. However, Walter Reuther—head of the United Auto Workers—fired Young in 1948 for radical behavior. Young then worked full-time for progressive presidential candidate Henry A. Wallace. Young also helped found the National Negro Labor Council in 1951.

Young's progressive actions led to a confrontation with the House Un-American Activities Committee in 1952, when it accused him of being a Communist subversive. During his appearance before HUAC, Young stated, "I consider the activities of this committee to be un-American." Though his stance earned him attention in some quarters, Young was subsequently blacklisted by employers and labor organizations.

For the rest of the 1950s, Young survived with the few jobs he could find, such as working in insurance sales and driving a cab. Still interested in politics, Young unsuccessfully ran to become a state representative in 1959. He was elected to the Michigan Senate in 1963. In 1968, he became the first African American on the Democratic National Committee. Young would go on to win the position of vice chairman of the DNC.

In 1973, Young won election as the first black mayor of Detroit. He was a popular choice among African-American voters. During his tenure, Young lowered Detroit's crime rates. He also led construction projects that helped revitalize the city's economy, such as the $350 million Renaissance Center business and retail complex in downtown Detroit. However, many businesses and residents still left the city while he was mayor, departures that disrupted the economy.

Young remained Detroit's mayor until health concerns related to his emphysema made him decide not to run for re-election in 1993. With five terms in office, he was the longest-serving mayor in the city's history.

In 1994, Young published his autobiography, entitled Hard Stuff. At the age of 79, Young died of respiratory failure on November 29, 1997, in Detroit.