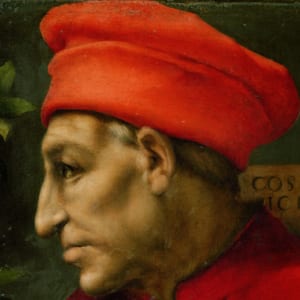 Cosimo de’ Medici was the “Elder” and start of the Medici dynasty that ruled Florence (Italy) from the late Middle Ages through the Renaissance, and after.

Cosimo de' Medici was born on September 27, 1389, in Florence. He represented the Medici bank, managed the papacy's finances and became the wealthiest man of his time. Despite never holding office, he controlled Florence via his wealth and was the start of a dynasty that held power for centuries. Cosimo was an important patron of Renaisance art. He died in 1464.