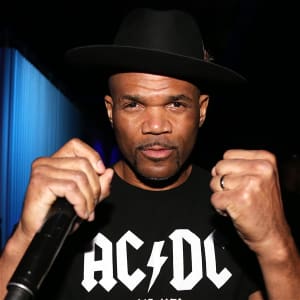 Darryl “DMC” McDaniels is one of the founding members of the pioneering rap group Run-D.M.C.

Raised in Queens, New York, Darryl “DMC” McDaniels grew up in the same neighborhood as his future Run-D.M.C. mates, Joseph “Run” Simmons and Jason "Jam Master Jay" Mizell. The trio revolutionized rap and propelled it into mainstream culture. As a solo artist, McDaniels has continued to tour and make music. In 2014 he launched his own comic books line, Darryl Makes Comics.

As a young boy, McDaniels drew his early creative inspiration from the comic books his older brother, Alford, brought home. “I started drawing with stick figures,” McDaniels recalled. “My brother was a pop culture dude that would discover stuff for us. So he would start bringing home comic books. I was reading the comic books to the best of my ability. But it was just pictures then. So I would draw stick figures.”

In his early teens, McDaniels's artistic passions revolved around music, especially the early sounds of hip-hop from pioneers like Grandmaster Flash and the Furious Five. In the basement of his home, McDaniels taught himself to deejay using a mixer and a pair of turntables. His love of rap was matched by Simmons, another aspiring deejay, and the two eventually decided to form a duo. Needing someone to scratch a few records for them, they turned to their friend Mizell, whom they considered a superior deejay. When they liked what they heard, the two asked Mizell to join them and the trio Run-D.M.C. was born.

In 1983, Run-D.M.C. signed with Profile Records and collected a $2,500 advance. The group hit modest pay dirt with its first single, “It’s Like That/Sucker MCs.” The song peaked at No. 15 on the R&B charts and helped pave the way for the band's self-titled debut album in 1984.

Branded by the group’s sportswear attire and hard-nosed street language, the record solidified Run-D.M.C.'s reputation as the leaders of the new generation of hip-hop music. Standing at the center of it was McDaniels, who dubbed himself the King of Rock, bringing a thundering, forceful sound to Run-D.M.C.’s records.

The group’s 1985 album, King of Rock, continued Run-D.M.C.’s momentum. But it was 1986’s platinum-selling Raising Hell that proved to be a signature record both for the band and hip-hop in general. Produced by Rick Rubin, Raising Hell featured the highly touted single, “Walk This Way,” a rap version of Aerosmith’s 1975 smash hit of the same name. The track was a whole new kind of force to hit the airwaves, blending Run-D.M.C.’s hard-edged rap style with Steven Tyler’s powerful vocals and Joe Perry’s driving guitar riffs.

The song soared up the charts, pushing hip-hop into the mainstream and making Run-D.M.C. music superstars. Across America, the trio became a household name.

During the group's short but important heyday it racked up many firsts for a rap group: The first to have its music video played on MTV; the first appear on the cover of Rolling Stone; and the first to perform on Saturday Night Live.

Run-D.M.C. broke up temporarily in the late 1980s, but reconfigured in 1993 to release a new album, Down with the King, before taking another hiatus. In 2000 Run-D.M.C. got back together to release Crown Royal. The tour that followed included appearances with Aerosmith.

But in 2002, tragedy befell the group when Jam Master Jay was shot and killed in his studio in Queens, New York. In the years since Mizell’s death, however, Run-D.M.C.’s legacy and impact on hip-hop music has only grown. In 2009, the group was inducted into the Rock and Roll Hall of Fame, just the second rap group to earn the honor. In 2016, Run-D.M.C. received rap's first Grammy Lifetime Achievement Award.

Along with the accolades and fame, however, McDaniels struggled to find happiness. By the late 1990s, his life had spiraled out of control. He turned to liquor, which only ratcheted up his depression. "Fame fortune and being DMC was just fulfilling no more so, in my mind I was 'OK, I gotta check out of here,'” he later said. “So, I was like, I gotta figure out how to commit suicide.”

A turning point, McDaniels says, came when the song “Angel” by Sarah McLachlan played out from his car radio. He says the song awakened him to what he had, propelling him on a path to learn about his family history. When he subsequently pressed his parents about his lineage, McDaniels made a startling discovery—he was adopted.

“When I met my birth mother, she said,‘I know you’re dying to know why I gave you up. I said, ‘Lady, that’s an understatement.’ She said, ‘I gave you up to give you a chance.’ I was like, ‘Lady, you gave me one hell of a chance.’”

The news initially created more turmoil for McDaniels. But while it certainly raised questions for him, it also answered others and helped set him on a path toward recovery. He checked himself into alcohol rehab, began attending adoption discussion groups and eventually reconnected with his birth mother and her family. He later sponsored a camp for orphaned and adopted children. “I was fortunate enough to be raised by parents who opened their hearts and home to me,” said McDaniels. “But in reality, there are so many kids out there that don’t have that. I want to help as many children as I can to become strong, independent and successful adults.”

In 2006, McDaniels worked with VH1 producers for the documentary DMC: My Adoption Journey, which told the story of his reuniting with his birth mother. That same year he released the album Checks Thugs and Rock n Roll. The record includes a collaboration with McLachlan on the adoption-themed song “Just Like Me.”

In 2014 McDaniels returned to his comic book roots and launched his own line, Darryl Makes Comics. Its first book, DMC, revolves around a new superhero in the 1980s who fights crime in New York City. McDaniels is also the author of two non-comics offerings: the 2001 autobiography King of Rock: Respect, Responsibility and My Life with Run-DMC and the 2016 memoir Ten Ways Not to Commit Suicide.

McDaniels married Zuri Alston in 1992. The couple has one son together, Darryl McDaniels Jr.