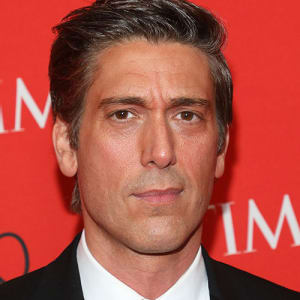 Who Is David Muir?

Born in 1973 in Syracuse, New York, David Muir is currently the anchor and managing editor of ABC News’ World News Tonight with David Muir. He succeeded Diane Sawyer in September 2014. He is also co-anchor of 20/20 with Amy Robach.

Muir has been with ABC News since August 2003, joining World News Tonight as a weekend anchor and chief substitute for Sawyer in 2011 and as a co-anchor of 20/20 in 2013. Prior to his role at the national network, he was at Boston’s WCVB and Syracuse’s WTVH.

In September 2017, under Muir’s lead, World News Tonight broke a 21-year streak and became the most-watched evening newscast, which hadn’t happened since Peter Jennings was behind the desk. The program has continued to be the most-watched nightly newscast in the May 2018 ratings sweeps.

What Is David Muir’s Salary?

The World News Tonight host makes $5 million a year and has a net worth of $7 million, according to Celebrity Net Worth.

In 2014, when Diane Sawyer switched focus to enterprise reporting and primetime specials, Muir took over the weekday newscast, which was rebranded World News Tonight with David Muir, as both anchor and managing editor. His first official broadcast was September 2nd.

One of David Muir’s biggest recent interviews was being the first to interview Donald J. Trump on January 25, 2017, after the President was inaugurated. Muir later told WCVB the interview was “awkward.”

Muir was the only journalist to interview President Barack Obama during his visit to Cuba in March 2016 and to talk to Apple CEO Tim Cook when the company and the FBI didn’t agree about unlocking the San Bernardino killer’s phone.

He has also interviewed Pope Francis inside the Vatican and then moderated a town hall with him, all in Spanish.

Unafraid to delve into the heart of a story, Muir has covered news from Tehran, Mogadishu, Gaza, Fukushima, Guantanamo Bay, Amman and the Hungarian-Syrian border.

He has also covered the Olympics games — the 2008 Beijing summer games and the 2010 Vancouver winter games.

Muir has won multiple Emmys, Edward R. Murrow awards and Society of Professional Journalists honors. Besides at his alma mater in 2011, Muir has also given commencement speeches at Northeastern University in 2015 and at the University of Wisconsin-Madison in 2018.

In 2017 Temple Adath Yeshurun in his hometown of Syracuse honored him with Citizen of the Year. That same year, he was named one of People’s Sexiest Newsmen. “Listen, I remember being the nerd all through middle school and high school. I remember interviewing my sister’s friends with my microcasette recorder, so if there’s anyone who finds reporting, particularly in this era, appealing, then I’m grateful,” he told People.

As for his career, Muir told Central New York Magazine: "I think I was always a curious kid. It's a business driven by curiosity. If you don't want to go out and learn about the world and see the place, it's the wrong business. But if you do…I've had an unbelievable front row seat."

Born to parents Ronald Muir and Pat Mills on November 8, 1973 in Syracuse, New York, Muir knew from a young age that he wanted to be a broadcast journalist. When he was 10, he would mock broadcast from a cardboard box in his family’s living room. By age 12, he made a habit of excusing himself from playing with his friends to watch the news at 6 p.m.

“I didn’t care. I thought Peter Jennings was the James Bond of evening news,” he told People. Muir's determination was even clear at Halloween, when he would put on a trench coat and dress as a reporter.

As a young teen, he wrote a note to Syracuse’s WTVH Channel 5 anchor Ron Curtis, asking how to get a job like his. “I'll never forget,” Muir told Central New York Magazine. “He wrote, ‘Competition in television news is keen. There's always room for the right person. It could be you.’”

By the time he was 13 and a student at Onondaga Central Junior-Senior High School, he was interning at WTVH. Muir dove into the newsroom, carrying tripods for photographers and reporters in the field, ripping scripts and getting Coca-Colas for the anchors.

“They had a growth chart on the newsroom wall where each summer and school break I came in, they'd mark me up on the wall and measure how much I'd grown and they would often joke about how many octaves my voice had dropped," he told Jimmy Kimmel in 2017.

Muir attended the Roy H. Park School of Communication at Ithaca College, where he was a journalism major and an anchor on a student newscast his freshman year. He also earned a minor in political science, which included studying at the Institute on Political Journalism in Georgetown and interning at the Department of Health and Human Services.

He graduated in 1995 with honors and continues giving back to his alma mater by regularly mentoring students. Muir gave the college’s commencement speech in 2011. He was awarded an honorary doctorate in 2015, but don’t call him Dr. Muir. “Here in New York, people will probably wants ‘scrips,” he told Vanity Fair, referring to medical prescriptions.

While at Ithaca, his roommate was higher education expert Jeff Selingo, author of the book There Is Life After College. Muir interviewed him during a Manhattan event for the release of the book in 2016.

While he was in college, Muir spent a semester studying abroad at the University of Salamanca in Spain. “This was so pivotal,” he told the New York Times. “This was living with a family, attending school in Spanish.” He credits the experience for being able to conduct a town hall with Pope Francis entirely in Spanish in 2015.

He has been sponsoring a scholarship for the study-abroad program at Ithaca College since 2008.

After graduation, Muir returned to Syracuse’s WTVH as a reporter and anchor for five years. He reported from Jerusalem, Tel Aviv and the Gaza Strip following Prime Minister of Israel Yitzhak Rabin’s assassination. His work earned honors from the Radio-Television News Directors Association, Associated Press and Syracuse Press Club.

He then leapt to a top 10 market in Boston, as a reporter for WCVB in 2000. There, a story he did tracking the plans of the 9/11 hijackers earned him a regional Edward R. Murrow Award.