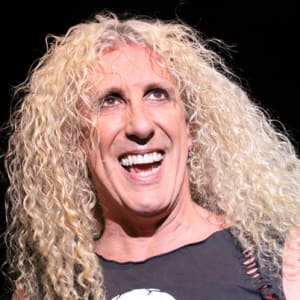 Born in Astoria, Queens, Dee Snider showed a talent for music early on. After trying out several rock bands, he had his big break when he joined Twisted Sister in 1976. As the lead singer, Snider brought a glam rock style to the band. Twisted Sister had hits in the early '80s with songs like "We're Not Gonna Take It" and "I Wanna Rock." Snider has also been a television personality, hosting Heavy Metal Mania on MTV in the '80s, and later with his wife and family on reality show Growing Up Twisted on A&E.

Born Daniel Snider on March 15, 1955, to a working-class family in Astoria, Queens, New York. He grew up in Baldwin, New York, and had an early love of performance; as a child he sang in a church choir, several school choruses and the Baldwin High School Concert Choir. Snider showed great promise as a singer, and while in high school he was selected for the All State Chorus.

Snider graduated from Baldwin High School in 1973. After earning his degree, Snider formed and left several rock bands, meeting with minor success. His big break, however, came in early 1976 when he joined the group, Twisted Sister, which was founded in 1972 by guitarist Jay French. By late 1975, the group had found a stable instrumental line-up through French's high school friend, guitarist Eddie "Fingers" Ojeda; bassist Kenneth Harrison Neil; and drummer Kevin John Grace. The group, however, was missing a lead vocalist. Snider stepped into the role with a glam-rock style reminiscent of New York Dolls, and quickly became the group's lyricist and lead singer.

The group released their first studio album, Under the Blade, in September 1982 to limited success. The next year, they released You Can't Stop Rock 'n' Roll, which was met with positive reviews. Their third album, Stay Hungry, released in 1984, would be the record that would put the group on the map in the U.S., with singles such as "We're Not Gonna Take It" and "I Wanna Rock."

In 1985, Dee Snider made his small-screen debut as the host of the MTV show, Heavy Metal Mania. The show featured news, interviews, and a variety of information about the burgeoning heavy metal scene. That same year Snider, along with musicians John Denver and Frank Zappa, became the voice of censorship opposition. Snider, Denver and Zappa all testified in a Senate hearing held by the Parents Music Resource Center, in which the group helped introduce warnings to advise consumers of explicit content in albums.

Snider also made his foray into film, writing and starring in his big-screen debut, Strangeland (1998). The horror film, which co-starred Robert Englund and Linda Cardellini, met with poor reviews and low box-office attendance. Yet Snider, undaunted wrote a working script for the sequel, Strangeland 2: Cult of Personality. After wrapping the film, Snider took to making appearances on TV shows, including a cameo in an episode of The Drew Carey Show (2001). He also appeared in the heavy-metal documentaries KISS Loves You (2004) and Metal: A Headbanger's Journey (2005).

During this time, Snider also began experimenting in other media. In June of 1999, the rocker started a new project as a morning show radio host on WMRQ in Hartford, Connecticut. Dee Snider Radio aired for three years before its cancellation. It returned to the air as a night show in 2004 on WMMR in Philadelphia. He often featured high-profile guests, including his friend Gene Simmons. Then in 2005, Snider became the host of the nationally syndicated House of Hair radio show. Snider returned to radio in June 2006 with Fangoria Radio on Sirius Satellite Radio.

On July 27, 2010, Snider and his family began appearing in the reality television show Growing Up Twisted, airing on A&E. On October 8, 2010, started a run in the cast of the Broadway show Rock of Ages.

Snider has been married to his wife Suzette, a former Twisted Sister costume designer, since 1981. They have four children: Jesse, Shane, Cody, and Cheyenne, and live on the North Shore of Long Island.