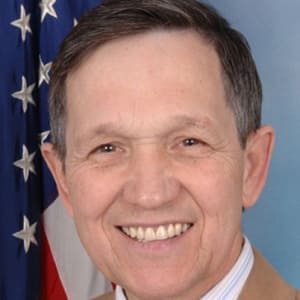 Democrat Dennis Kucinich is a member of the U.S. House of Representatives known for his 2004 and 2008 presidential bids.

In 1977, Dennis Kucinich became the youngest mayor in Cleveland history, and in 1996, he was elected to the U.S. House of Representatives, where he is known for his idealism and activism. Kucinich ran for president in 2004 and 2008, coming up short. In 2007 and 2008, Kucinich introduced impeachment articles for Vice President Dick Cheney and President Bush respectively, regarding the Iraq War.

Kucinich first ventured into politics while still a student at Cleveland State University, winning a seat on the Cleveland city council in 1969. In 1973, Kucinich received a master's degree in communications from Ohio's Case Western Reserve University.

In 1996, Kucinich was elected to the U.S. House of Representatives. As a congressman, Kucinich has been a progressive proponent of environmental initiatives, sustainability practices, human rights issues and the social and economic interests of his Ohio constituents, including the troubled steel industry. In 2001-2003 Kucinich was Chairman, and later Co-Chairman (2004), of the Congressional Progressive Caucus.

Dennis Kucinich is known for his idealism, activism and indefatigable spirit. In 2003, Kucinich began his campaign for the 2004 Democratic presidential nomination with a platform largely dominated by human rights and environmental initiatives. In his campaign for the 2008 presidential nomination, he called for universal healthcare and an immediate withdraw from Iraq.

In 2007 and 2008, Kucinich introduced impeachment articles for Vice President Dick Cheney and President Bush respectively, charging them with the manipulation of evidence of Iraq's weapon's program and deceiving the country about Iraq's connection to al-Qaeda.

Kucinich is the chairman of the Domestic Policy Subcommittee of the Oversight and Government Reform Committee. He is also a member of the Education and Labor Committee. In November 2008, Dennis Kucinich was reelected to a seventh term in Congress.