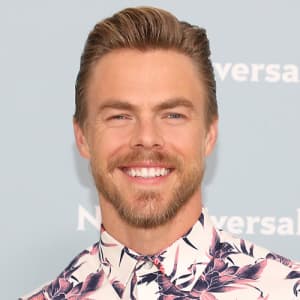 Derek Hough spent a decade as a pro dancer on ‘Dancing With the Stars’ before becoming a judge on ‘World of Dance’; he’s also appeared in movies, stage shows and TV productions.

Who Is Derek Hough?

Derek Hough (born May 17, 1985) was one of the professional dancers on ABC's Dancing With the Stars for multiple seasons between 2007 and 2016, winning a record six times with his celebrity partners. A gifted choreographer, he's received two Emmy Awards for his choreography on Dancing With the Stars. Hough spent his teen years in London, where he perfected his skills as a ballroom and Latin dancer; he was the Latin world champion by the time he was 18. He's toured with his younger sister, fellow dancer Julianne Hough, and has been in stage productions, movies and television shows, including as a judge on NBC's World of Dance. Hough also wrote a New York Times bestselling memoir, Taking the Lead: Lessons from a Life in Motion (2014).

How Many Times Did Derek Hough Win 'Dancing With the Stars'?

Between 2007 and 2016, Hough won a record six times with his celebrity partners.

Hough and Hayley Erbert, a troupe dancer on Dancing With the Stars, have been a couple since July 2015. In July 2017, she accompanied Hough to the wedding of his sister Julianne and Brooks Laich.

After Hough and actress Shannon Elizabeth were paired on Dancing With the Stars, the two began a year-long relationship that ended in 2009. Hough dated designer Lauren Conrad for about three months in 2011.

Among the other women that Hough has been romantically linked to are actresses Nina Dobrev and Nikki Reed, and British singer Cheryl Cole.

When Was Derek Hough Born?

Julianne Hough is Hough's younger sister. With encouragement from their parents, they began dancing together as children and went on to perform at schools and state fairs. When Hough was 13, he and Julianne moved to London to attend the renowned — and demanding — dance school Italia Conti Academy of Theatre Arts (while in London, Hough and Julianne lived with fellow dancer Mark Ballas' family). This not only advanced their careers, it offered a personal respite as Hough's parents were going through a divorce.

Since then, Hough and Julianne have often worked together. Their time on Dancing With the Stars overlapped, and they also headlined the successful dancing tours Move Live on Tour and Move Beyond Live on Tour. In addition, the two faced off on Lip Sync Battle in 2015 (Julianne won). For Hough, getting to dance and work on other projects with his sister is something to appreciate; he once told Good Morning America, "We feel very lucky to do something that you love with somebody that you love and care about. It's a wonderful thing."

Hough grew up in a Mormon household with three older sisters, plus younger sister Julianne. His parents, Mari Anne and Bruce, met on a college ballroom dance team; all of his grandparents were dancers as well.

'Dancing With the Stars'

In 2007 Hough became one of the dancing pros on Dancing With the Stars for season 5 (joining Julianne, who was already a pro dancer on the show). This job not only called for Hough to teach celebrities how to perform dances like the rumba, tango, paso doble or jive, he had to choreograph a variety of routines. Hough went on to receive multiple Emmy Award nominations in the choreography category for his work on the show, winning in 2013 and 2015. After a decade — during which Hough became a six-time recipient of the Mirror Ball trophy alongside different celebrity partners — he left Dancing With the Stars in 2016.

In his first Dancing With the Stars season, Hough partnered with 90210 actress Jennie Garth. The next year, he paired up with American Pie actress Shannon Elizabeth in season 6 and Brooke Burke in season 7; Burke and Hough won that season. 2009 saw Hough work with rapper Lil' Kim in season 8 and model Joanna Krupa in season 9. In 2010 Hough had back-to-back wins with singer Nicole Scherzinger in season 10 and Dirty Dancing star Jennifer Grey in season 11.

Hough was not in season 12, but came back to dance with talk-show host Ricki Lake for 2011's season 13. In 2012 he partnered with Maria Menounos in season 14 and Olympic gymnast Shawn Johnson in season 15. In 2013 Hough achieved another set of back-to-back wins with country star Kellie Pickler in season 16 and Glee actress Amber Riley in season 17.

Hough and Paralympian Amy Purdy impressed viewers in 2014's season 18; later in the year he danced with YouTube star Bethany Mota for season 19. His first partner in 2015 was gymnast Nastia Liukin for season 20; in season 21, Hough triumphed for the sixth time with his partner, conservationist and Crocodile Hunter progeny Bindi Irwin. Hough danced with Taxi actress Marilu Henner during season 23 in 2016.

In 2017 Hough was seen as a judge on NBC's summer TV show World of Dance, along with Ne-Yo and Jennifer Lopez (Lopez, also an executive producer, chose Hough for the panel). The show features dancers from around the world competing for a $1 million prize. A ratings success, World of Dance was renewed for a third season even before its second season hit the airwaves in 2018.

While living in England, a young Hough appeared as an extra in Harry Potter and the Sorcerer's Stone (2001). He portrayed a Hogwarts student who was in Ravenclaw; though he hadn't read the Harry Potter books, Hough decided to keep part of his costume — then later lost the items he'd taken.

In Make Your Move (2014), Hough and South Korean pop star BoA starred as two dancers from different worlds who are drawn to one another. The film, originally titled Cobu 3D, was one of the reasons Hough was absent from the twelfth season of Dancing With the Stars.

Hough landed a straight dramatic role when he guest starred on the TV show Nashville as an actor who gets entangled with Hayden Panettiere's character of Juliette. And he got to sing when he portrayed Corny Collins for NBC's live musical production Hairspray Live! in December 2016. Hough also danced the salsa with Gina Rodriguez in a fantasy sequence on Jane the Virgin.

Among Hough's other TV gigs are hosting the competition Family Dance Off in 2013 and co-hosting, with sister Julianne, The Disney Parks' Magical Christmas Celebration in 2016. Plus, he has competed in the celebrity edition of American Ninja Warrior for NBC’s annual Red Nose Day charity fundraising campaign.

On the HGTV show Mark & Derek's Excellent Flip, Hough and Mark Ballas worked together to renovate a house so they could make a profit by flipping it.

In addition to his great success as a dancer and choreographer, Hough makes music, such as when he and longtime friend Mark Ballas formed the Ballas Hough Band.

Hough also directed and starred in the video for Michael Bublé's "I Believe In You," and danced with violinist and friend Lindsey Stirling in the video "The Arena."

Hough's song "Hold On" was originally inspired by a struggling friend. However, after hearing about the suicide of Linkin Park's Chester Bennington, Hough decided to re-record the song and create a video. His goal was to bring attention to the problem of suicide — which also claimed the life of his uncle — and to encourage men to discuss their feelings. The updated song came on out November 1, 2017.

A fan of the band Breaking Benjamin, Hough covered their "Ashes of Eden" after he had vocal cord surgery, and has recorded with them.

In 2006 Hough was the lead in a West End production of Footloose. He appeared in the New York Spring Spectacular at Radio City Music Hall in 2015, though an injury kept him from some performances.

Hough was slated to star in a Broadway production of Singin' in the Rain in 2017, but the project was delayed.

In addition to his Emmy wins, Hough's choreography skills were recognized by ice dancers Meryl Davis and Charlie White. The pair did a routine choreographed by Hough at the Sochi Olympics in 2014, where they won the gold medal (a first for the United States in that sport).

When he was 22, Hough was a choreographer for the BBC reality show DanceX.

Hough has been open about being bullied as a boy in Utah. Describing his experiences to People magazine in 2014, he said, "I was punched in the face, pretty aggressively in the stomach. I was tied up in trees and left in fields." Hough also noted he'd since forgiven the perpetrators.

As a kid, Hough dreamed of a career in archeology.

Much of Hough's teen years were spent at dance competitions. In a 2016 interview, he stated, "I moved to London when I was a kid, and I traveled all around Great Britain. Then I'd go to France, Germany, Holland, Russia, Japan, Italy — I was all over the place. This was all for competitive dance; I won my World Championship in the Czech Republic."

Hough has said he loves to travel. On trips he's participated in activities such as scuba diving, rock climbing and even skydiving.