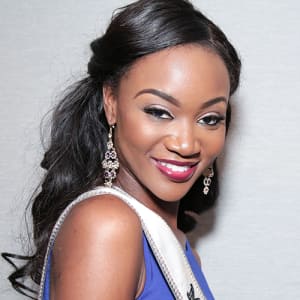 Deshauna Barber is best known for becoming Miss USA 2016 and the first active military officer to hold the title. She also came in as a top finalist in Miss Universe 2016.

Who Is Deshauna Barber?

Born in 1989, Deshauna Barber is a captain in the U.S. Army Reserve who, at the age of 26, was crowned Miss USA in 2016, representing the District of Columbia. That same year she became one of the top nine finalists in the Miss Universe pageant. Earning her master's at the University of Maryland University College in management information systems, Barber is an IT analyst for the U.S. Department of Commerce and a motivational speaker. She uses her platform to shed light on race relations and gender and pay equality issues in the military.

Born on December 6, 1989 in Columbus, Georgia, Deshauna Barber was raised in Fayetteville, North Carolina and was nicknamed "Tweety." Both of her parents, Darren Barber and Cordelia Barber, along with her two siblings are all military veterans.

Barber studied business at Virginia State University and went on to receive her master's degree at the University of Maryland University College in management information systems and services.

It was during Barber's early college years that she was discovered at a Target store. A former Miss Texas, (who later became her pageant coach), caught sight of the young woman and encouraged her to compete.

"Being glamorous and being girly is something that's not really incorporated in my childhood," Barber told Cosmopolitan.com.

But it was that inexperience that actually helped Barber thrive in competitions: "To have that moment of glamour, to really get dolled up and so empowered on stage, show off all your hard work, your body, your gown, I fell in love with the industry and I've been doing it ever since."

Barber represented the United States in Manila at the 2016 Miss Universe pageant and ended up as one of the top 9 finalists. Although she didn't take home the crown, she expressed gratitude on her whirlwind experience.

"I feel thankful and honored to have placed Top 9 amongst 85 of the worlds most beautiful, intelligent and compassionate women. I am honored to have represented the U.S. at Miss Universe," she wrote on her Instagram. “Thank you Philippines for the best 3 weeks of my life!”

However, her positive experience at the pageant was sullied by some of the racial and social stigmas that she was forced to confront while there.

"Competing in Miss Universe and dealing with the fans of competitors in other countries got tough," she later admitted to in an essay she wrote for Refinery29. "I had no idea how much racism I would experience from an international standpoint. They'd send me monkey emojis, and say that my skin looked like a poop emoji and tag me in photos with apes… I didn’t speak about it, because I didn't want to deter anyone from competing. You want to make it seem like everything is happy and hunky-dory, but there are a lot of very challenging moments."

Still, Barber keeps her head held high on the experience: "I thought it was beautiful that I could represent those darker chocolate girls that don't always see themselves on the national stage."

In 2017, right before passing the Miss USA crown to Kára McCullough, who, just like her predecessor, was representing the District of Columbia, Barber revealed in a pre-taped interview that her mother died from lung cancer two months after she won the crown. In honor of her mother, along with the fact that the 2017 pageant was being held on Mother's Day, Barber went on stage and showed off her natural hair.

"My mom always pushed me to wear my natural hair, and I would always would say no," Barber wrote. "I didn't think I would be crowned Miss USA if my hair was in its natural state. She'd still push me, because she thought they'd love it. And she was right."

Barber's mane statement did indeed receive praise from the media and fans, with one proud woman proclaiming: "Deshauna Barber is the Barbie Doll I want my daughters to have."