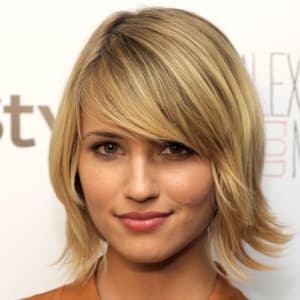 Dianna Agron is an actress and dancer who is best known for her role as high school cheerleader Quinn Fabray, in the FOX musical hit, Glee.

Born in 1986 and raised in San Francisco, Dianna Elise Agron began taking dance classes at the age of 3. Following high school, Agron, intent on working as a professional actress, moved to Los Angeles, where she eventually landed small roles on a number of television programs. In 2009, her career changed dramatically when she landed the role of Quinn Fabray in the FOX television series, Glee.

Dianna Elise Agron was born on April 30, 1986, in Savannah, Georgia. The daughter of Ron and Mary Agron, Dianna moved several times during the early part of her childhood due to the fact that her father worked in the hotel business. Eventually, the Agron family settled in San Francisco, where Dianna began taking dance lessons at age 3.

Performance — she studied ballet and jazz dance later in her youth — proved to be an important part of her childhood. But it wasn't until her senior year at Burlingame High School that she began acting, appearing in school productions of Vanities and Grease.

Off-stage, Agron led a normal teenager's life. She worked at a local boutique, where she says she became enthralled with fashion, and took photos for her high school yearbook.

Following her graduation from high school in 2004, the 18-year-old Agron moved to Los Angeles, intent on pursuing her dream of becoming a professional actor. After acting in a number of student films, Agron landed a small part in the made-for-TV film, After Midnight: Life Behind Bars (2006).

Though the movie failed to gain much traction, it served as a launch point for Agron, who went on to land several small parts in a range of television programs, including CSI: NY, Numb3rs and Heroes.

In 2009 Agron's life and career changed significantly when she was chosen to play the role of the high school cheerleader, Quinn Fabray, on the FOX television series and breakout musical hit, Glee.

Agron almost did not land the role, as she nearly scrapped plans to try out for the part on the day of the audition. "I was nervous out of my mind," she later recalled. "I was sitting in the parking lot thinking, Are you going to do this or are you going to walk away?"

Glee follows the adventures of a diverse high school singing group, New Directions, who cover everyone from Michael Jackson to Madonna. Agron's part in the show also taps into her background in acting and dance and has helped make the young actress a budding star. Over the years, Glee has received a number of accolades. Beginning in 2009, for example, the cast captured the first of three consecutive Screen Actors Guild awards for Outstanding Performance by an Ensemble in a Comedy Series.

As a result of Glee's success, Agron has enjoyed the opportunity to venture into several other projects. In 2010, she worked with Cher, Christina Aguilera and Stanley Tucci in the film, Burlesque. The following year, she starred in the action thriller, I Am Number Four.