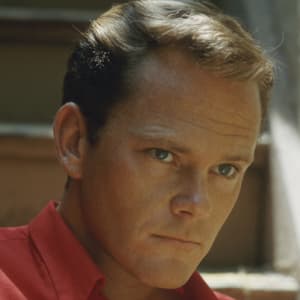 Dick Sargent was an actor of film and television mostly remembered for his portrayal of Darrin Stephens on TV’s Bewitched.

After years of acting in small parts in films and on TV, Dick Sargent landed the role for which he would be remembered, Bewitched’s Darrin Stephens, when Dick York had to leave the show due to illness. With many acting credits to his name, Sargent remained on TV after Bewitched left the air and was featured in films and on stage until his death in 1994.

Actor Dick Sargent was born Richard Stanford Cox on April 19, 1930, in Carmel, California. His mother, Ruth McNaughton, was the daughter of Los Angeles' Union Stockyard baron John McNaughton. Billing herself as Ruth Powell, she appeared in a handful of silent films, including Rex Ingram's Four Horsemen of the Apocalypse (1921).

His father, Colonel Elmer Cox, served in World War I. A strict man, he later became a business manager to such Hollywood players as Douglas Fairbanks and director Erich von Stroheim.

Sargent attended the San Rafael Military Academy in Menlo Park, California. He later attended Stanford University, where he studied acting and obtained a taste for live theatre. By the time he graduated, he had appeared in 25 campus productions.

After college, Sargent took many odd jobs, including ditch digging, to make ends meet while pursuing an acting career. At one point, he journeyed to the colonial city of San Miguel Allendein Mexicoto enter the import-export business. He acquired a lifetime love of Mexican art and culture.

When he returned to California, Sargent made the transition from live theater to feature films and later television. He finally got his career rolling, debuting in an uncredited role in the movie Prisoner of War (1954) (with Ronald Reagan). His first major role in a motion picture was as P.F. Wilson in 1957's Bernadine, for which he received a Laurel Award from the nation's film exhibitors.

Now known as Dick Sargent, the actor was a friendly, dependable and well-admired performer but his work was often deemed ordinary. On occasion he would find more redeeming support work in such hit movie comedies as Operation Petticoat (1959) and That Touch of Mink (1962) (both with Cary Grant).

But more often, he would perform in forgettable projects such as Fluffy (1965) with Tony Randall, Billie (1965) starring Patty Duke, the Don Knotts misfire The Ghost and Mr. Chicken (1966), the Elvis Presley vehicle Live a Little, Love a Little (1968) and The Private Navy of Sgt. O'Farrell (1968) with Bob Hope and Phyllis Diller.

Sargent also built up a reliable resume over the years on TV both in drama and comedy including work on Gunsmoke, Wagon Train, I Dream of Jeannie and Adam-12. Regular co-starring roles in the series One Happy Family (1961) and Broadside (1964) also kept him busy.

Sargent and Tammy Grimes were said to have successfully auditioned for the original roles of Darrin and Samantha Stephens during the initial casting of the pilot episode of Bewitched. Sargent became unavailable because he was under contract to Universal for Broadside. Grimes was also under contract and unable to play the part of Samantha. Sargent went on to play Tammy Grimes's brother on her short-lived series The Tammy Grimes Show in 1966.

By the time health problems forced Dick York (the original Darrin Stephens) to leave the series in 1969, Sargent was no longer committed to Universal and he was finally able to take the part.

Sargent came in without a hitch and the switching of Darrins was done without any explanation at all. His three seasons on the popular show made him a household face, if not a household name.

After Bewitched ended its run in 1972, Dick continued to appear on TV with guest parts on Taxi, Alice, Fantasy Island and Three's Company. He also returned to feature films, including George C. Scott's Hardcore (1979) In between, he did voice work for commercials and performed live theater when he had the chance.

In 1989, Sargent was diagnosed with prostate cancer. Two years later, he revealed to the world he was homosexual after tabloid papers began to refer to his serious illness as AIDS-related.

Sargent's ABC press biography and the few interviews he had done during his years as Darrin Stephens had manufactured an ex-wife to avoid speculation about his sexuality. Sargent was never married, but had a long-time companion whom he was with for 20 years before the man's death from a cerebral hemorrhage in 1979. Sargent's companion from 1986-'94 was writer/producer Albert Williams.

Sargent personally felt great relief in finally being open about his lifestyle, and professionally felt that he was doing a great service to other homosexuals who could gain the courage to come out to their friends and family.

In June 1992, former co-star Elizabeth Montgomery rode with Sargent as he was honored as a Grand Marshal of the Los Angeles Gay Pride parade.

Despite radiation therapy and regular treatment for his cancer, Sargent died on July 8, 1994, in Los Angeles at the age of 64.