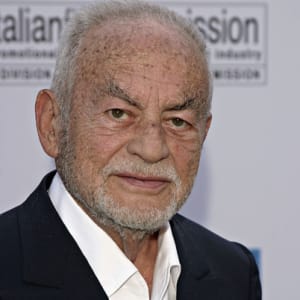 Dino De Laurentiis was a film producer who over his 60-year career produced more than 600 films, from King Kong to Serpico to Flash Gordon.

From horror to art house, Dino De Laurentiis produced a wide variety of films during his 60-year career. He produced the Oscar-winning best foreign films La Strada and Nights of Cabiria, both directed by Federico Fellini. He also produced such films as Serpico, King Kong (1976) and Dune. In 2000, he received the Irving G. Thalberg Memorial Award in recognition of his life’s work.

Producer Dino Do Laurentiis born on August 8, 1919, in Torre Annunciata, Italy. From horror to art house, Dino De Laurentiis has produced a variety of films during his more than six-decade long career. He produced the Oscar-winning best foreign films, Federico Fellini's La Strada and Nights of Cabiria. The son of a pasta maker, he went to Rome to study at the Centro Sperimentale di Cinematografia while in his teens. De Laurentiis then began gaining hands-on experience in film. Taking on nearly very task involved in filmmaking, he was a prop handler, an extra, an actor and an assistant director.

At the age of 20, De Laurentiis produced his first picture, Troppo tardi t’ho conosciuta (1939). This was soon followed by L’amore canta (1941), but his work was soon affected by World War II. He scored his first international success with Riso amaro in 1949. It was later released in the United States as Bitter Rice. The drama starred Silvana Mangano as a beautiful peasant woman who works in the rice fields and gets tangled up in a difficult situation. Love blossomed between Di Laurentiis and Mangano, and the couple married that same year. They became a super couple in the Italian film world.

In the early 1950s, De Laurentiis joined forces with another legendary Italian filmmaker, Carlo Ponti (who also the husband of screen siren Sophia Loren). They established the Ponti-De Laurentiis production company and made several notable films together. Two of their most critically acclaimed projects were La Strada (1954) starring Anthony Quinn and The Nights of Cabiria (1956), both of which won the Academy Award for Best Foreign Film and were directed by Federico Fellini.

The pair also created elaborate film epics, such as Ulysses (1954), which starred Kirk Douglas and Silvana Mangano. The film tackled the ancient saga about the sailor Ulysses and his journey home after the Trojan War, which was written by the Greek poet Homer. De Laurentiis and Ponti also produced an adaptation of the classic Russian novel War and Peace (1956) by Leo Tolstoy. Audrey Hepburn, Henry Fonda, and Mel Ferrer played the lead roles in the film, which earned an Academy Award nomination for its director King Vidor.

After ending his partnership with Ponti in the late 1950s, De Laurentiis continued to work on a variety of projects. He even built a huge production facility, Dinocittà, near Rome for his work in the early 1960s. Parts of The Bible . . . In the Beginning (1966) were filmed there, which was directed by John Huston. Featuring a huge cast of film stars, the film had such actors as George C. Scott, Richard Harris, Ava Gardner, and Peter O’Toole portraying biblical figures. Another big success for De Laurentiis during this period was Franco Zeffirelli’s adaptation of William Shakespeare’s Romeo and Juliet (1968). Always interested in a diverse mix of films, he also produced the science fiction cult classic, Barbarella (1968), featuring Jane Fonda as a futuristic sex kitten. It was directed by her then-husband Roger Vadim.

In the early 1970s, De Laurentiis moved to the United States. During this decade, he worked on a lot of suspense and action films while still supporting a number of more artistic endeavors. De Laurentiis served as executive producer on Sidney Lumet’s gritty drama, Serpico (1973), which starred Al Pacino as a cop who stands up against police corruption. Helping bring several of Charles Bronson’s action films to the big screen, he worked on such films as The Valachi Papers (1972). De Laurentiis reteamed with Fellini on Casanova (1977) and worked with Ingmar Bergman on The Serpent’s Egg (1977). One of his most ambitious projects of the time was remaking the 1933 classic action adventure film, King Kong (1976) with Jessica Lange. Lange played the object of affection for the enormous ape, a role that made Fay Wray famous in the original. The response to the remake was decidedly mixed.

Returning to science fiction, De Laurentiis produced several adaptations in the early 1980s. In 1980, the modern take of the classic hero, Flash Gordon, made to the big screen, but was not a box office success. A few years later Dune (1984), the first film version of the popular science fiction series by Frank Herbert, was released. Directed by David Lynch, the big budget fantastical tale failed to make much of an impression on moviegoers.

Around this time, De Laurentiis experienced a series of personal tragedies. His only son, Federico, died in a plane crash in 1981. He had been working on a film in Alaska, following his father’s footsteps as a producer. Two years later, Dino and his wife Silvana separated. (They were in the midst of divorce proceedings when Silvana died in 1989.) Around that same time, he established the De Laurentiis Entertainment Group (DEG). But several box office flops, most notably the over-the-top epic Tai-Pan (1986), put a strain on his business. De Laurentiis resigned from DEG in 1988.

Down, but not out, De Laurentiis continued to producing. Working on television projects, he brought an adaptation of Stephen King’s Sometimes They Come Back (1991) to CBS and the biblical story of Solomon and Sheba (1995) for the Showtime cable network. Back on the big screen, De Laurentiis was behind the crime drama, Body of Evidence (1993), starring Madonna, and the thriller Unforgettable (1996) with Ray Liotta. Both were critical and box office failures.

Much of De Laurentiis’s last works have revolved around the writings of Thomas Harris and his legendary character, Hannibal Lecter. While he did not produce the box office hit Silence of the Lambs (1991), he worked on the sequel Hannibal (2001) and two prequels, Red Dragon (2002) and Hannibal Rising (2007). Anthony Hopkins reprised his role of the cannibalistic killer in Hannibal and Red Dragon and Gaspard Ulliel played a young version of the character in Hannibal Rising. He also produced The Last Legion (2007) and Virgin Territory (2007).

During his career, De Laurentiis has produced, funded, or otherwise contributed to more than 600 films. In 2000, he received the Irving G. Thalberg Memorial Award from the Academy of Motion Picture Arts and Sciences in recognition of his life’s work.

Married to producer Martha Schumacher in 1990, De Laurentiis and his second wife have two daughters, Carolyna and Dina. He also has three daughters from his first marriage, Veronica, Raffaella, and Francesca. Like her father, Raffaella is also a film producer. Daughter Veronica has worked as an actress and is the mother of celebrity chef Giada De Laurentiis.