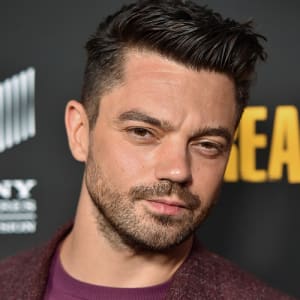 British actor Dominic Cooper is known for his big screen contributions to ‘Mamma Mia!’ and ‘Captain America,’ as well as his starring role on the AMC supernatural comedy-drama ‘Preacher.’

Who Is Dominic Cooper?


Born in London, England, in 1978, actor Dominic Cooper studied his craft at the London Academy of Music and Dramatic Art. After finding early success with the stage and cinematic runs of The History Boys, he reached a wider audience by way of the screen adaptation of Mamma Mia! This opened the door for roles in romantic comedies like Tamara Drewe and blockbusters like Captain America, as well as offbeat fare like Abraham Lincoln: Vampire Hunter. The actor has since made his mark in cable drama with AMC's Preacher, and in 2018 he rejoined his Mamma Mia! castmates for the sequel.


Already known as an up-and-coming talent in the U.K., Cooper introduced himself to new audiences with the worldwide success of Mamma Mia! (2008). Based on the smash stage musical, the film features bride-to-be Sophie (Amanda Seyfried) seeking to find the identity of her father from one of mom Donna's (Meryl Streep) three former boyfriends, all the while singing and dancing to pop group ABBA's greatest hits. As Sophie's fiancé, Sky, Cooper has more of a background role, but still gets to perform a sexy beach duet with Seyfried via the track "Lay All Your Love on Me." Despite a poor reception from some critics, audiences were enchanted by Mamma Mia!, making it the highest grossing screen musical of all time.

With the potential of a sequel too good to pass up, producers followed with Mamma Mia! Here We Go Again in July 2018. Along with returning the main characters of the original cast, the sequel features two notable newcomers in Cher, as Donna's mother, Ruby, and Lily James, as a young Donna. Cooper describes the film as "more sensitive and thought-provoking" than the first, and even promises more musical contributions on his part.


Since 2016, Cooper has starred in AMC's Preacher as Jesse Custer, a priest with a criminal past, a love for the bottle and an unusual ability to make others obey his commands. Based on a late-1990s comic book series, the program has proved faithful to its imaginative source material, with Custer searching for God and battling demons alongside hard-edged girlfriend Tulip (Ruth Negga) and vampire buddy Cassidy (Joseph Gilgun). Unabashedly violent, Preacher has also grabbed an audience with its humor and examination of human frailty through its hero's flaws, fueling an ongoing saga that began its third season in June 2018.


Cooper made his entry to the sprawling Marvel Cinematic Universe in 2011 with Captain America: The First Avenger. As Howard Stark, creator of the patriotic super soldier and father of Iron Man's Tony Stark, his character's aura looms over the various Marvel features, though his screen time has been limited. This was corrected in 2015 with the television spinoff Agent Carter, which featured Cooper in a recurring role alongside Hayley Atwell's titular character, though the show was canceled after two seasons despite favorable reviews.


'The Duchess' and Other Early Roles

Following bit parts in an early string of films, Cooper enjoyed a minor breakout in Starter for 10 (2006), as the childhood buddy of James McAvoy's trivia whiz. The Escapist (2008) gave him the chance to star alongside Brian Cox and Damian Lewis, though his performance in the prison drama was eclipsed by the near-simultaneous release of Mamma Mia! Months later he was back on the big screen in The Duchess, his pre-prime minister Earl Grey complicating the personal drama of Keira Knightley's Georgiana Spencer.

An Education (2009) placed Cooper in one of his most acclaimed projects to date, his Danny making an impression on teenage Jenny (Carey Mulligan) as she finds herself in an unfamiliar world with an older boyfriend. Tamara Drewe (2010) marked a return to the "hot boyfriend"-type character, though the graphic novel adaptation was also largely praised, and gave Cooper another chance to show off his musical chops. He then displayed a range previously unknown to even his biggest fans in The Devil's Double (2011), playing both Saddam Hussein's murderous son Uday and his emotionally distraught body double, Latif Yahia.

'Need For Speed' and 'Warcraft'

Entering video-game franchise territory, Cooper starred alongside Aaron Paul in the racing thriller Need for Speed (2014). The film was generally viewed as a knockoff of the Fast & Furious films, but Cooper stood out for embracing his role as the villainous driver Dino Brewster, and a built-in fan base ensured a decent box-office return. Similarly, Warcraft (2016) had its legions of gamer enthusiasts and fans of the Lord of the Rings-type fantasy genre. As King Llane Wrynn, Cooper had fewer chances to shine amid a confusing plot and onslaught of special effects, but the feature was successful enough to pull in more than $400 million worldwide.

Hinting at the mayhem to come in Preacher, Cooper went off the beaten path for Abraham Lincoln: Vampire Hunter (2012), his Henry Sturgess helping Honest Abe track down the undead while preserving the Union. Critics seemed unsure of how to respond to the genre-mashing feature, though it was commended for its commitment to the concept. Dracula Untold (2014), on the other hand,
presented a straightforward origin story of the genre's most familiar character, with Cooper fueling the monster's creation through his warlike ways as Ottoman Sultan Mehmed II.

'Miss You Already,' 'Stratton' and 'The Escape'

After appearing as a former hard-rocking significant other in Miss You Already (2015), which swung from comedy to Beaches-like tear-jerker, Cooper experienced a misfire with the poorly reviewed action flick Stratton (2017). He fared better alongside his Tamara Drewe co-star Gemma Arterton in The Escape (2018), about a worn-down wife and mother looking to feel alive again.

How Tall Is Dominic Cooper?


Cooper is 5'10", tall enough to fill up the screen as a leading man or hunky love interest to a more statuesque actress, like 5'7" Keira Knightley.

Following such appearances as a blink-and-you'll-miss-it part in HBO's Band of Brothers, Cooper first made his mark on the small screen in a 2008 BBC adaptation of Jane Austen's Sense and Sensibility, as the dashing but disappointing John Willoughby. That year he also earned attention for his role in the lesser-known but powerful God on Trial, about a group of Auschwitz prisoners who question their faith, and in 2009 he starred in the TV film Freefall, as a heartless mortgage salesman on the eve of the era's global financial crisis.

Fleming: The Man Who Would Be Bond

Although he hasn't cracked the list of favorites to take over the coveted role of James Bond, Cooper did get the chance to play his creator, Ian Fleming, in the 2014 miniseries Fleming: The Man Who Would Be Bond. Covering its subject's early career in the British Naval Intelligence, the series portrays Fleming in an unflattering light, a proper set-up to understanding the origins of 007, according to Cooper. "It's how he would've liked to have seen himself, but he definitely doesn’t have the strength of character," said the actor. "That’s why he ended up writing the books, about the man he thought he was."


Cooper was in an eight-year relationship with his Preacher co-star Negga until the two parted ways in early 2018. Prior to that, he was romantically involved with Seyfried, his Mamma Mia! on-screen love interest.

The actor has also enjoyed a long-term bromance with late-night host James Corden. The two grew close as fellow cast members on The History Boys in the mid-2000s, and later became roommates in London after breaking up with their respective girlfriends around the same time.

Cooper enjoyed some of his earliest professional successes on stage, appearing in Royal National Theatre productions of Mother Clap's Molly House and His Dark Materials. However, it was his performance as Dakin in Alan Bennett’s The History Boys that first put him on the map as an actor to watch. About a group of students preparing for university entrance exams in the 1980s, The History Boys earned acclaim for its sharp writing and view of classroom dynamics, and Cooper earned further exposure when the production traveled to Broadway and beyond, eventually turning into a 2006 feature film.

Cooper returned to the National Theatre in 2009 for a revival of Jean Racine's tragedy Phèdre. While primarily a showcase for Helen Mirren in the title role, Cooper also stood out as Hippolytus, her stepson and forbidden love interest, in a production that also drew audiences for broadcasts to select movie theaters around the world.

By now an established screen actor, Cooper was ripe to slide into the shoes of Restoration poet John Wilmot, Earl of Rochester, in a 2016 production of The Libertine. A role previously inhabited by such bad boys as Johnny Depp, Cooper radiated the charm and complexities of a man renowned for his appetites and intellectual prowess. The Guardian called his performance "commanding," praising his "brooding inwardness" that showed an active mind always at work.


Dominic Edward Cooper was born on June 2, 1978, in the Greenwich section of London, England. He was one of three boys born to mom Julie, a schoolteacher, and dad Brian, an auctioneer, who divorced when he was five years old; Cooper soon had another half-brother, from Brian's second marriage, and later learned that he also had a half-sister, from his dad's extramarital affair.

Growing up, Cooper was surrounded by strong musical influences: One older brother played in a band, and Cooper eventually tried his hand as a lead singer for his friends' groups. He also developed a love for fast cars and learned how to build motorbikes. Academically, he enjoyed socializing far more than studying, though he found his niche by acting in school plays.

On the advice of a girlfriend, Cooper applied to the London Academy of Music and Dramatic Art. Left out of his final-year musical for "having no rhythm," he instead made his mark in Waiting for Godot, where his performance caught the attention of agent Pippa Markham and set his professional career in motion.