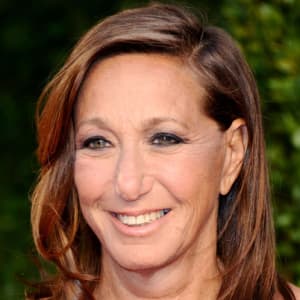 American fashion designer Donna Karan is one of the most influential designers in the world today.

Born Donna Ivy Faske on October 2, 1948, in Forest Hills, New York. One of the most influential fashion designers in the world, Donna Karan has left a lasting impact on the world of clothing, bringing uptown New York chic into the mainstream. In 2004 she was the recipient of the Lifetime Achievement Award from the Council of Fashion Designers of America.

Fashion designer. Born Donna Ivy Faske on October 2, 1948, in Forest Hills, New York. From an early age Donna, who grew up in Hewlett, Long Island, was immersed in the world of fashion. Her mother worked as a model while her stepfather made a living as a suit designer.

Karan's family's influence was apparent in her early life. By the age of 14 she had dropped out of school and begun selling clothing at a local boutique. In 1968 Karan was accepted into the highly respected Parsons School of Design in New York City.

While in school, Karan landed an prestigious summer job working for designer Anne Klein. Her work there proved so impressive that within two years she was named associate designer. By the age of 26, Karan, who was by then married to her first husband, Mark Karan, was named head designer.

Creating Her Own Brand

Karan's ascendency to the top of Anne Klein happened not long after the founding designer's death. Under Karan's direction, and with the help of fellow designer and Parsons friend Louis Dell'Olio, the Ann Klein brand blossomed.

In 1984, Karan, who by then divorced her first husband, Mark, decided to strike out on her own. At her side was Stephen Weiss, her second husband, a painter and sculptor whose calm demeanor helped offset his wife's sometimes intense personality. With Weiss at her side, Karan left Anne Klein and debuted her first women's collection in 1985.

From the start Karan made it her mission to "design modern clothes for modern people." With an increase of women entering the professional workforce, Karan's timing proved to be impeccable.

Her partnership with Weiss was also valuable. Weiss, who passed away from lung cancer in 2001, was said to be the influence for many of her men's wear collections. In 1992, when Karan launched her first perfume, she directed its creators to come up with something that smelled "like Casablanca lilies, red suede and the back of Stephan's neck."

In 1988, Karan, recognizing the need for a more affordable fashion line, launched Donna Karan New York (DKNY), a women's line that was influenced by her original Signature collection. In 1990 she developed DKNY Jeans and then, two years later, debuted DKNY for men.

Since then a whole host of ancillary products have been created under the DKNY name, from children's clothes to furniture.

In 2001, Karan sold her publicly traded company to LVMH, Moet Hennessy Louis Vuitton, a French luxury conglomerate. Reports of the sale were said to be nearly $650 million. As part of the sale, Karan agreed to stay on as the designer of the brand.

Over the years Karan has been the recipient of numerous awards and honors. In 2003 she became the first American to ever receive Fashion Group International's "Superstar Award." The following year, she received the prestigious Lifetime Achievement Award from the Council of Fashion Designers of America.

Karan published her autobiography The Journey of a Woman in 2004. In 2015, she stepped down as the head of her own label to devote her time to Urban Zen, a lifestyle brand she launched in 2007.