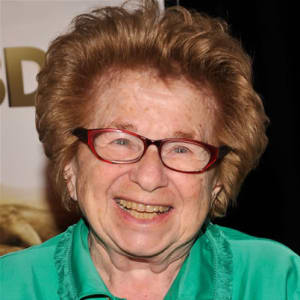 Dr. Ruth Westheimer is one of the world’s most recognized authorities on sex. She has delivered her advice on TV, radio and the web for decades and has written numerous books.

Ruth Westheimer was born on June 4, 1928, in Frankfurt, Germany. In 1939, her family sent the young Ruth to Switzerland to escape the Nazis. Moving to New York in 1956, she worked for Planned Parenthood. A lecture she delivered in 1980 led to a radio talkshow called Sexually Speaking. The show was a hit and Westheimer became a nationally recognized authority on sexual matters. Dr. Ruth has written numerous books and still lives in New York City.

Psychologist, author, broadcaster, family and sex counselor Karola Ruth Siegel was born June 4, 1928, in Frankfurt, Germany. She grew up the only child in a privileged Orthodox Jewish family; her father, Julius Siegel, was a prosperous notions wholesaler. Her mother, Irma Siegel (nee Hanauer) was a cattle rancher’s daughter. A curious and inquisitive child, Ruth often crept into her father’s library and read his books, which first piqued her interest in human sexuality. However, her carefree childhood was cut short when the Nazis came to power in 1933. Ruth’s world was violently shattered by Kristallnacht ("The Night of Broken Glass") — a Nazi riot persecuting the Jews — and seven days later, by the SS who came to take her father. The remaining family members decided to flee Germany to escape the widespread and increasingly violent anti-Semitism.

Ruth was sent to the protection of a Swiss school, which eventually evolved into an orphanage for Jewish refugee girls. She never saw her family again, and now believes they perished in the Auschwitz concentration camp. Ruth suffered immensely during this time and was treated like a second class citizen at the school, working as a maid for the Swiss Jewish girls. She frequently caused concern amongst the teachers with her loquacious nature and willingness to share her knowledge on taboo subjects, such as menstruation, with the other girls.

After the war, Ruth emigrated with some of her friends to Israel, then Palestine, and became a Zionist. She changed her first name to Ruth and became a sniper and scout for the Haganah, the Jewish underground movement fighting for the creation of a Jewish homeland. On May 14, 1948, Israel declared its Independence and on June 4, Ruth’s birthday, she was wounded when a bomb exploded outside the kibbutz where she lived, taking off the top of one of her feet. Her recovery was difficult and slow.

Because of her tiny four-foot-seven-inch frame, Ruth frequently worried that she would never marry, lamenting in her diary, “Nobody is going to want me because I’m short and ugly.” However, in 1950, an Israeli soldier from her kibbutz proposed marriage and she accepted immediately. The two moved to Paris, where Ruth studied psychology at the Sorbonne and her husband studied medicine. As Ruth later recounted to McCall’s magazine, “Everybody around me didn’t have money. We went to cafes and had one cup of coffee all day long. Everybody.” The marriage ended after five years and her husband went back to Israel.

Upon receiving a restitution check for 5,000 marks (approximately $1,500) from the West German government, Ruth left the Sorbonne and sailed with her French boyfriend to New York, where a place to live and a scholarship to the New School for Social Research awaited her. Once in New York, Ruth gave birth to a baby girl, Miriam, and divorced the Frenchman (whom she had married to legalize the pregnancy). She worked as a housemaid to support her daughter while attending English lessons and evening classes at the New School. In 1959, she graduated with a master's degree in sociology and went to work as a research assistant at Columbia University.

While on a ski trip in the Catskill Mountains with her six-foot tall boyfriend in 1961, Ruth met and fell in love with Manfred Westheimer, also a Jewish refugee and a much more compatible physical match for Ruth at five foot five inches. Nine months later, they were married. Ruth became an American citizen shortly after, and soon the couple had a son, Joel.

In the late 1960s, Ruth took a job at Planned Parenthood in Harlem, New York City and was somewhat alarmed to find herself participating in frank discussions about sex. However, she soon became comfortable and in 1967 was appointed project director. She simultaneously worked towards her doctorate degree in family and sex counseling through Columbia University evening classes, and in the early 1970s, she became an associate professor of sex counseling at Lehman College in the Bronx. Upon moving to Brooklyn College and promptly being fired, Ruth found herself feeling rejected and destitute, later telling People magazine, “it made me feel as I did when I got kicked out of Germany. Angry, helpless, rejected.”

However, Ruth’s life and career took a fortunate turn when she gave a lecture to New York broadcasters about the need for sex education programming to dispel the silence around such issues as contraception and unwanted pregnancies. The talk impressed Betty Elam, community affairs manager of the New York radio station WYNY-FM, and she subsequently offered Ruth 25 dollars a week to make Sexually Speaking, a 15-minute show every Sunday that would air shortly after midnight.

The show was an immediate success and Ruth soon had a loyal following. Producers expanded her time-slot to one hour and opened up the phone lines to allow callers to ask their personal questions on-air. The phone lines were jammed every Sunday night, and producer Susan Brown had to screen the calls to pick out the most interesting and urgent questions. By the summer of 1983, Sexually Speaking was attracting a quarter of a million listeners weekly. The message was clear, America desperately needed Dr. Ruth Westheimer. By 1984, the show was syndicated nationally.

From that point on, Dr. Ruth’s career skyrocketed. However, the fans who adored her frank and non-judgmental approach to their sexual queries were equally matched by conservative critics who found her advocacy of contraception and sexual openness threatening and irresponsible. She always took criticism into account, but nevertheless insisted that she was providing a much-needed educational service to her listeners. Ruth eventually expanded her influence to newspaper columns, a column in Playgirl magazine, and the Lifetime cable television series, Good Sex! With Dr. Ruth Westheimer. She has also published several books including Dr. Ruth’s Guide to Good Sex, Sex For Dummies, and her autobiography, All in a Lifetime.

Over the years, Dr. Ruth Westheimer has received many awards for her work, including a honorary doctorate degree from Trinity College in 2004 and the Medal for Distinguished Service from the Teacher’s College at Columbia University. In 2009 an off Broadway play about her life, Becoming Dr. Ruth, opened, and in 2014 another play, Becoming Dr. Ruth, debuted at the Virginia Repertory Theatre.

Dr. Ruth Westheimer currently lives in the Washington Heights area of New York City. Her husband, Manfred, died in 1997. Between her two children, she has four grandchildren. In November of 1996, she launched a Web site featuring daily sex tips and advice columns. Still active as ever, she has a strong social media following and continues to write books, teach, and lecture.