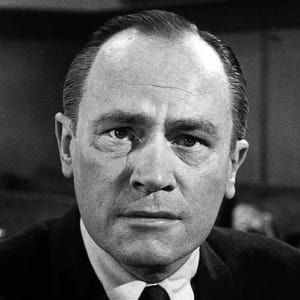 Actor E.G. Marshall starred on Broadway in the original runs of The Crucible and Waiting for Godot before becoming a film and TV star.

E.G. Marshall kept the secret of his original name throughout his life. His career began on Broadway, where he eventually starred in the original runs of The Crucible, Waiting for Godot, and The Iceman Cometh. His films include Twelve Angry Men and The Caine Mutiny. On TV, Marshall became a household name in the 1960s for his role in The Defenders.

In all likelihood, E.G. Marshall was born on June 18, 1914, in Owatonna, Minnesota. However, both the date of his birth and his true name are the source of some controversy. While many public records list Marshall's birthday as June 18, 1910, in a 1997 interview Marshall insisted that his true birthday was four years later. Since his death in 1998, certain pieces of social security information have emerged that appear to confirm the 1914 date. An even greater mystery than Marshall's date of birth is the origin of the initials "E.G."

When asked to state his full name in interviews, Marshall insisted, "My full name is E.G. Marshall. I am known by no other." When pressed as to what the "E.G." stood for, Marshall typically responded in jest. Some of his more noteworthy responses were "Enigma Gregarious," "Everybody's Guess" and "Edda Gunnar," an obscure reference to a book of Norse legends. While many hypothesize that his real name is Everett Gunnar, the true meaning of his initials (as his son-in-law David Sayer suggested shortly before Marshall's death) "will go with him to his grave."

Marshall became interested in theater and acting at a very young age. "I used to watch movies—silent movies—and stock companies and theater whenever I could," he later recalled. He also began performing wherever he could—in school, at church, at the YMCA, and in community theater productions. But in Minnesota during the Great Depression, there were few opportunities for advanced training in acting. "There were no acting schools back then," Marshall said. Instead, he attended the University of Minnesota and Carleton College, where he indirectly honed his acting skills by majoring in speech and music.

After graduating, Marshall worked briefly for a radio station in Minneapolis before joining the American Art Theater, an itinerant Shakespearean theater company. As Marshall put it, he "joined a touring Shakespearean company in the Deep South and spent three or four years playing Guildenstern and all the really terrible parts." He recalled, "We were doing Hamlet, Romeo and Juliet and Faust, and we used the same set for them all … It was pretty bare." Asked by an interviewer whether the actors were paid, Marshall responded, "We got fed. That was more important."

After spending several years touring the country with the American Art Theater, Marshall and two actor friends packed their bags for New York City, arriving with no jobs but big dreams of making a splash on Broadway. Marshall spent his first few months in the Big Apple living in a boarding house, eating cabbage and beans while working odd jobs just to make ends meet. Then, in 1938, he made his Broadway debut in a Federal Theatre Project production of Prologue to Glory. It was the beginning of a long and successful Broadway career. Marshall went on to appear in Thornton Wilder's The Skin of Our Teeth (1942), Jacobowsky and the Colonel (1944) and The Ice Man Cometh (1946).

In 1953, Marshall originated the part of Reverend John Hale in Arthur Miller's The Crucible before taking on the leading role of John Proctor. His most famous Broadway performance came in the 1956 Broadway premiere of Samuel Beckett's Waiting for Godot. In a 1958 interview, Marshall extolled Beckett's controversial play as "a real theater piece—not something that has to be molded and hacked to fit in a theater. The theater today is too flaccid, too passive, too dull. It is good to have it stirred up by a play like this."

While he was enjoying a successful career as a leading man on Broadway, Marshall was also developing his film career. He made his feature film debut in the 1945 picture The House on 92nd Street before appearing in such 1950s classics as The Caine Mutiny (1954), Twelve Angry Men (1957) and Compulsion (1959). His most notable later film roles included Woody Allen's Interiors (1978), Superman II (1980), Nixon (1995) and Absolute Power (1997).

Despite this prolific career as a stage and film actor, the venue where Marshall enjoyed his most success was television. Marshall's most acclaimed and famous role came on the 1960s CBS courtroom drama The Defenders. Marshall played Lawrence Preston, an implacable defense attorney who represented such diverse and controversial clients as civil rights demonstrators, neo-Nazis and conscientious objectors. In one especially controversial episode of the socially piercing show, Marshall's character represented an abortionist. The Defenders ran from 1961 to '65, and for his performance on the show, Marshall won the 1962 and 1963 Emmy Awards for outstanding performance by a lead actor in a series. After The Defenders went off the air, Marshall again achieved television success on the NBC medical drama The New Doctors, which ran from 1969 to '73.

Over the course of his long and distinguished acting career, Marshall developed a reputation for his honest and stirring depictions of characters, as well as for his willingness to embrace socially critical, controversial material. And though many of the plays, films and TV shows that he appeared in  featured dark themes, Marshall believed that underpinning all his work was an optimistic, life-affirming message: "No matter what," he said, "atom bombs, hydrogen bombs, anything—life goes on: You can kill yourself, but you can't kill life."