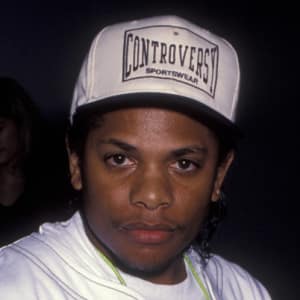 Eazy-E was a West Coast rapper and label co-founder who was part of the group N.W.A., known for albums like Straight Outta Compton.

Born on September 7, 1963, in Compton, California, Eazy-E co-founded Ruthless Records and started the group N.W.A. with fellow rappers Ice Cube and Dr. Dre. The controversial act, known for its violent and misogynistic lyrics, dropped albums like Straight Outta Compton, with Eazy releasing work as a solo artist. A radio show host as well, he died from AIDS-related complications on March 26, 1995.

Rapper Eazy-E was born Eric Wright on September 7, 1963, in Compton, California, a city in Los Angeles County. He dropped out of high school and worked as a drug dealer for a time, using his income to co-found a label, Ruthless Records, with music industry insider Jerry Heller. He teamed up with two other youngsters from the region, O'Shea "Ice Cube" Jackson and Andre "Dr. Dre" Young, who started crafting songs for Wright's label.

After another Ruthless group opted not to record a song by Jackson and Young, Wright joined with the two men to record "Boyz-n-the-Hood" as Niggaz With Attitude, also known as N.W.A.

With other rap artists such as DJ Yella, MC Ren, and the D.O.C. joining the act, the group released its debut album, N.W.A. and the Posse, in 1987, dropping its next album, Straight Outta Compton, the following year. The disc, which went on to earn double-platinum sales, also contained the track "F— tha Police," spurring the FBI to send a cautionary letter to the company that housed Wright's label.

Eazy-E released his solo album Eazy-Duz-It the same year, which was in fact another collaborative effort between various members of N.W.A. with Eazy serving as the main performer. After Ice Cube left the group in 1989, N.W.A. released the EP 100 Miles and Runnin' in 1990 and the full-length Efil4zaggin the following year, which hit No. 1 on the Billboard charts.

Seen as a major influence on the gangsta rap themes that would later dominate commercial hip-hop, the group became known for extremely violent and misogynistic lyrical content, with much of its sales fueled by adolescent male suburbanites.

N.W.A. broke up in the early '90s, with Eazy and Dr. Dre embroiled in litigious disputes that also saw the two attacking and lampooning each other in their respective work. Eazy, a consummate businessman who commented on how rap controversy could be used to spur album sales, continued running Ruthless Records, discovering acts like Bone Thugs-N-Harmony. In 1992, he released his own solo EP, 5150 Home 4 tha Sick; another EP was released the following year.

Eazy incited controversies of a different sort by attending a 1991 Republican fund-raiser that featured President George H.W. Bush (the rapper was invited after his name was reportedly pulled from a list associated with charitable donations) and after speaking up for one of the officers involved in the beating of Rodney King. By 1994, he'd also become the host of a Los Angeles radio music show on KKBT-FM.

In 1995, after Eazy was hospitalized for severe respiratory issues, it was learned that the rapper had contracted AIDS. He soon revealed his condition to the public and, weeks after his diagnosis, would die from complications related to the disease on March 26, 1995, at age 31.

An album that Eazy had been working on was released posthumously in 1995, and an EP of unreleased tracks was put forth on the seven-year anniversary of his death. One of his children, singer E.B. Wright, is producing A Ruthless Scandal, a documentary about the final days of her father's life. His story is also depicted in Straight Outta Compton, the 2015 biopic about N.W.A. directed by F. Gary Gray.