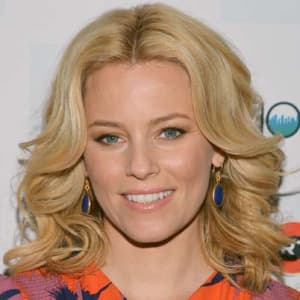 Elizabeth Banks is an Emmy Award-nominated film and television actress known for her work in ‘Spider-Man,’ ’30 Rock,’ ‘W.,’ ‘Pitch Perfect’ and ‘The Hunger Games.’

Who Is Elizabeth Banks?

Banks married film producer and sportswriter Max Handelman in 2003, and together they have two songs, Felix and Magnus and Felix, both born via surrogate.

In 2008 Banks starred as First Lady Laura Bush in the Oliver Stone directed, George W. Bush biopic W. The following year she returned to her guest role on the medical comedy Scrubs, in which she had portrayed Dr. Kim Briggs in 2006. In addition to her movie work, Banks continued on TV with a recurring 30 Rock role as conservative news commentator Avery Jessup, who became romantically involved with Alec Baldwin's character Jack Donaghy. Bank received 2011 and 2012 Emmy nominations for her work.

The year 2012 was a big one for the actress, with six films being released that she starred in — among them People Like Us, The Details, What to Expect When You're Expecting and Man on a Ledge. Her biggest project that year was the screen adaptation of the bestselling Suzanne Collins series The Hunger Games. The film, starring Jennifer Lawrence, featured Banks as Effie Trinket, a capitol representative with a particularized accent who sports brightly-hued wigs, face makeup and extravagant attire. Games grossed more than $690 million worldwide, and Banks was cast in its sequels, Catching Fire (2013), Mockingjay – Part 1 (2014), and Mockingjay – Part 2 (2015).

In 2014 she starred as Melinda Ledbetter in the acclaimed biopic Love & Mercy about the life of The Beach Boys' Brian Wilson. The following year she appeared in Magic Mike XXL and over several seasons had garnered a role (Sal) on the hit sitcom Modern Family, for which she gained another Emmy nomination in 2015. That same year she also starred in Netflix's comedy miniseries Wet Hot American Summer: First Day of Camp as Lindsay and reprised her role two years later with a sequel Wet Hot American Summer: Ten Years Later (2017).

Banks has worked behind the scenes as well. She started the production company Brownstone with her husband Max Handelman, and the two have produced Surrogates (2009) and the Pitch Perfect movies (2012 and 2015), two comedic outings about an all-women's a cappella group starring Anna Kendrick and Rebel Wilson. Banks also made her big-screen directorial debut with the second Pitch Perfect film, which earned around $285 million worldwide, more than doubling the gross of its predecessor. In autumn 2015, it was announced that Banks would helm the third film in the franchise. She has also directed and acted in the short Just a Little Heart Attack as part of the Go Red for Women campaign, which educates viewers on heart disease.

Some of Banks' latest projects include The Happytime Murders (2018) and the upcoming television and film reboot of Charlie's Angels, which she'll direct.

Banks lived in New York for a time and acquired on-screen experience in Gotham-based TV productions like Sex and the City and Third Watch. She made her movie debut in the gender-twisting drama Surrender Dorothy and starred in the 2000 John Singleton remake of Shaft before changing her last name to Banks. (She didn't want to be confused with another thespian named Elizabeth Mitchell who later starred in the series Lost and V.)